All hail the Winterizer! Ratchet’s new gun turns enemies into snowmen that give out health and ammo! Insomniac Games can’t help themselves, as they’re bringing yet another Ratchet & Clank game to PS3 despite  now working on multiplatform titles. It would seem they’re a long way off running out of ideas for new weapons too if this new trailer is anything to go by.

Into the Nexus is set to be a return to the classic games, carrying on the story arc from A Crack in Time. The last game focused on awful tower defence sections, so this is awesome news. Also, there’s some neat little 2D platforming sections to look forward to. This is looking like one of the best Ratchet games in years. Knack may have to wait. END_OF_DOCUMENT_TOKEN_TO_BE_REPLACED

Insomniac’s first outing since leaving Sony’s nest was always going to be a tough task. But with such a strong history of inventive weaponry in the Ratchet & Clank and Resistance games, chances were that anything they put their minds too involving boomsticks would be fun.

Fuse is a third-person cover shooter with a heavy emphasis on co-op. With the multiplatform competition consisting of the like of Kane & Lynch and Army of Two, it’s all there for the taking. Fusepacks a little extra punch by allowing for four-player co-op action, rather than a paltry two.

END_OF_DOCUMENT_TOKEN_TO_BE_REPLACED

A HD version of Ratchet: Gladiator (or Ratchet: Deadlocked in the US) was announced last year but it’s been quiet ever since. Until now that is, as a Trophy list for the game has emerged via Exophase. This leads us to believe a PSN release is just around the corner. Gladiator was a lot of fun back on the PS2, despite leaning more towards combat arenas instead of platforming and exploring.

Online multiplayer options were available, although the online functions of the PS2 were only available if you bought a network adapter (or the newer slim PS2). This time we’ll be able to get online straight away and the game should be an entertaining blaster. It’ll certainly be better than the recent tower defence (why!) game in the series, Q-Force. END_OF_DOCUMENT_TOKEN_TO_BE_REPLACED

Originally planned for a March release date, the game was then delayed to add some extra polish and to probably avoid Bioshock Infinite’s media and sales vortex. Insomniac have just confirmed via facebook (see I was working) that the game will hit EU territories on May 31st, with america getting it a few days earlier on May 28th. END_OF_DOCUMENT_TOKEN_TO_BE_REPLACED

The latest patch for Ratchet & Clank Q-Force has just been released giving players a free new map of the classic location of Metropolis. Released late last year, the game was hardly a classic addition to the series, ditching the platforming in favour of a tower-defence model. Check out our review here. Maybe these additions will tempt some players back.

The patch also introduces a number of tweaks and balance fixes to the weapons and defences. There’s nothing particularly huge, but reducing the Warmonger’s rockets from five to three just makes me all kinds of sad. There’s no mention of when we’re getting the free Vita version that was supposed to ship with the game as a part of Sony’s cross-buy incentive.

The patch weighs in at a meaty 427MB and all the minute details are listed after the break. END_OF_DOCUMENT_TOKEN_TO_BE_REPLACED

The Ratchet & Clank series has been somewhat unpredictable in recent years as it seems to be trying to reinvent itself with the last few games despite a strong following and decent review scores. Its blend of planetary exploration, platforming and fantastically fun weaponry was a hit every time, culminating in the excellent A Crack in Time in 2009.

In 2011, the series delved into co-op gameplay and despite dumbing down the controls to remove manual aiming and allow all players to share a single screen, the game was an enjoyable blast with the usual polish we’ve come to expect from the series. It was surprising to hear the studio was working on yet another R&C title after announcing the multi-platform Fuse. We were hoping for something along the lines of A Crack in Time again, but alas we have a PSN tower-defence download title. Wait… what?

END_OF_DOCUMENT_TOKEN_TO_BE_REPLACED

You might be wondering where Insomniac Games have been since announcing their multi-platform title,Overstrike. Well, since then this is their second Ratchet & Clank title, it would seem they’re not quite ready to move out of mama Sony’s house quite yet.

In recent years we’ve had the awesome Crack in Time and last year saw the enjoyable inclusion of multiplayer to the series with All 4 One. Today’s demo was single player but there will be online and splitscreen co-op options for two players. This could work very well as the action was a little dumbed down for All 4 One to allow four players to share a single screen. It was fun, but not quite the full co-op experience long-time fans craved.

END_OF_DOCUMENT_TOKEN_TO_BE_REPLACED 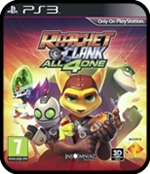 Co-op multiplayer Ratchet & Clank. The series has been consistently fantastic without it, but we’re always keen to watch a great game grow. But with co-op, we knew there would be concessions to the game we know and love. Would this sour the overall experience though? In short: no, this is still a great Ratchet game, even as a single-player experience.

If you’d prefer to play through the game alone (also the best way to build up your arsenal), just choose a character and get going. With Ratchet, Clank, Captain Quark and Dr. Nefarious all working together against a common enemy, you can choose to play as any of the four. An AI partner follows you around to help in gunfights and co-op tasks if you’re flying solo. Co-op partners, either local or online can drop in or drop out at any time, which allows you to progress through the game as you choose.

END_OF_DOCUMENT_TOKEN_TO_BE_REPLACED

For years, the Ratchet & Clank series has been crying out for co-op and from what I’ve played so far, it was a great call for Insomniac Games to finally run with it before they put all their efforts into the multi-format Overstrike. After playing the beta recently, I was worried about a few bugs that required a game reset, but I’m happy to report they were nowhere to be seen with this latest build of the game that took place in the same levels.

Ignoring the usual heroes, Ratchet and Clank, we opted to play an offline two-player game as the showboating Captain Quark and the er nefarious Dr. Nefarious, the two characters that have provided some great laughs over the years. Players will find the action very similar to the older games with every character having shooting and melee skills, complete with their own version of Ratchet’s Comet Strike, where they throw their weapon, only to have it boomerang back to them, which is great for smaller enemies and crates.

END_OF_DOCUMENT_TOKEN_TO_BE_REPLACED 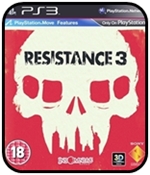 With Insomniac Games moving onto a multi-format future with Overstrike, this could well be the final Resistance title on the PS3. It was PS3 gamer’s first FPS love, but since then it has always been overshadowed by the technical powerhouse of Killzone. So how will the series bow out?

You now play as Joe Capelli, (R2 SPOILER!) the man forced to kill Nathan Hale as the Chimera virus finally overcame the former hero. Despite Capelli’s hand being forced, he was given a dishonourable discharge from the army. Four years later, the Chimera are still slowly strangling the remains of the human race from the earth and we find Capelli living with a small group of survivors and his wife and child.

END_OF_DOCUMENT_TOKEN_TO_BE_REPLACED

Insomniac live up to their name once again by providing another Ratchet and Clank game that’ll keep you playing long into the night. The only problem facing the series is the lack of competition to keep it on its toes. Nevertheless this is still an awesome addition to the series.

Following on from the end of Tools of Destruction and Quest for Booty, Ratchet is still looking for his robotic side-kick, Clank, who has been kidnapped by the returning nut-job, Dr. Nefarious who wants to use Clank to gain access to the Great Clock that controls all time in the universe. So yeah, there’s a fair bit going on, but there’s a quick summary at the start of the game to refresh your memory and ease in newcomers (welcome by the way). END_OF_DOCUMENT_TOKEN_TO_BE_REPLACED