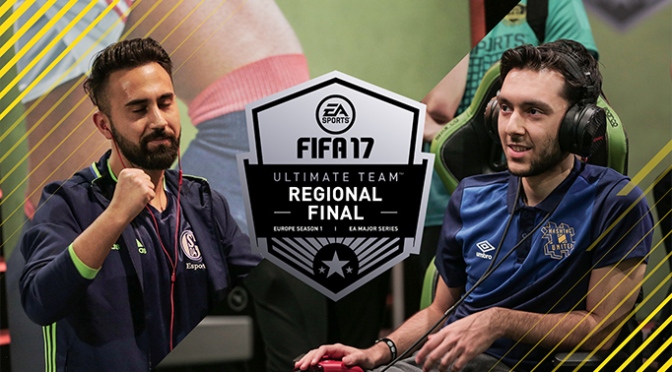 Truth be told, I’ve never really taken the time to watch much e-sports coverage online. Sure I’ve watched the occasional Street Fighter tournament final, but I’ve never tuned into the latest League of Legends fixture, or checked in on the Call of Duty tournaments.

However, when flicking through the BT Sports channels (in the UK) a few days ago I happened across some coverage of a regional match for the FIFA 17 Ultimate Team Championships in Paris. I was surprised to see dedicated coverage on a popular UK TV channel and settled down to watch the rest of the programme involving a two-leg match between two pro players.

By the end of the games, I came away thinking that there’s certainly potential for games like FIFA 17 to be enjoyed by gamers and non-gamers alike (assuming they already like football) as a spectator sport. But comparisons with regular football coverage put the coverage of EA’s game in a poor light.

Don’t get me wrong, live football coverage on TV is far from perfect (seriously, some former football player pundits have all the personality of a potato), but some basic elements should be replicated in the world of e-sports too. Mainly, liven up the footage of the game itself.

Replays and different camera angles just didn’t feature at all. We’re used to seeing replays of dirty tackles, close shots or complex dribbles, but this TV coverage of FIFA 17 didn’t even show replays of the goals. Not one.

Now, from a player’s perspective, I can see why replays of close calls would be skipped so momentum can be maintained and maybe goal replays are skipped when any player pushes a button, especially if the conceding player doesn’t want it rubbed in. Or maybe it’s a gentleman’s agreement online to not watch replays, I’d be surprised given the ludicrous amounts of venom and tea-bagging one usually finds in online gaming.

This isn’t a typical online matchup though; it’s a tournament game, with big money in-line for the final winner. And a part of making that prize pot so enormous is raking in the viewers. More viewers equal more advertisers and sponsors. There’s just no spectacle so far though.

The camera angles during play never shift and they’re using the far out setting to give the players the best view of the pitch and available passes. That’s fair enough, hell it’s the camera settings most of us use. For a spectator though it’s a bit dull and impersonal – like watching from a tower block window next to the stadium.

The extensive use of picture-in-picture tech to show the match and the live player faces on each side was a waste of time too as it made the match itself irritably small and there was no emotion to speak of on the players’ faces at the time.

So how do you keep the players happy and focussed on their performance and make it interesting the viewer? Well for a start, there’s nothing stopping the show showing us a replay of their own creation by simply winding back their own footage to show a goal or interesting moment. Better yet, EA could make a better effort at pushing FIFA into the world of e-sports with a proper, fully functioning spectator mode.

Giving the online viewers, or at least e-sports content producers, access to a suite of camera angles, replays and stats to produce footage more akin to real football would allow for much more exciting coverage. The players can keep their locked camera angle on their screen, but we get the best options available.

There were a few other rough edges that need to be tightened up, as some of the production values smacked of amateur. The match was over two legs, but there was no on-screen replication of the overall score, as the coverage relied on the in-game score. The only match stats shown were the in-game pop-ups too.

A decent spectator mode would give the producers access to those stats and simple graphical overlays could put them on-screen whenever they wanted, not to mention get the appropriate score on screen.

The second leg was a bit of an omnishambles too as the game seemed to crash after around 40 (in-game) minutes. This meant they simply rebooted the game and said to the players they’d keep the score and only play around 50 in-game minutes to bring it up to the regular 90. So there was no way of accounting for the player conditions or bookings. Not to mention there was still no overlay to explain the score behind the default 0-0 on-screen. The commentary team did a decent job of trying to keep us up-to-date with the actual score, but they failed to properly explain what happened with the crash in the first place. All we saw was a brief error message saying a controller had been disconnected, and then the camera cut away to the players instead.

One area that did impress was the commentary. Clearly the team were sport and gamer fans and had plenty of past knowledge about the two players along with the teams they picked. So no problems there at all.

As for the match itself, I was certainly interested in seeing a pair of quality players go head-to-head, although it did feel a bit too professional at times as there was so much riding on the game. So forget attempts at 30-yard screamers, I recall most of the goals involving a series of passes to set players up as close as possible to goal. That ol’ onion bag didn’t exactly take a beating from the numerous carefully slotted goals.

So would I watch the coverage again on BT? Sure, I’ll give it a few more shots, but probably on a basis of it being on when I’m channel hopping, rather than actively set a reminder each week. And that from a guy that hasn’t bought a FIFA game since FIFA 14. Do I believe e-sports can be a thing beyond the likes of League of Legends and the mass markets of countries like South Korea? Sure, but both content producers and game developers/publishers should take some lessons from the decades or regular sports coverage to make it a true spectator sport.