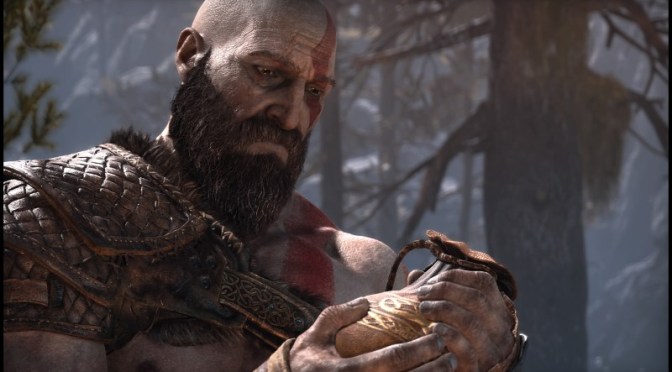 God of War’s long-overdue venture into the Norse wildlands gives Kratos and the series a chance to leave the blood-soaked ruins of ancient Greece behind. And after the patricidal events of God of War III, you would expect Kratos to have found some peace.

And it would seem things were going to plan for a while, but the new God of War game starts with signs it’s all falling apart for the Ghost of Sparta once again. Years have passed, it’s never said exactly how many, but we find Kratos has a new family and a young son, Atreus. 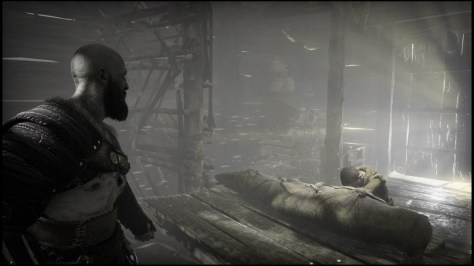 With Atreus’ mother’s recent passing though, your first swing of Kratos’ new axe isn’t against a local monster, but to cut down a tree for her funeral pyre. Is it all falling apart again for our Spartan? Surely, he didn’t… well you remember what happened to his first family while he was under the gods’ spell.

Never one for tears, Kratos is instead bitter, cold and quick to chastise Atreus at any opportunity. It seems Kratos and Atreus don’t have much of a relationship at all and you can see them sideways glancing at each other during the mother’s funeral, each clearly thinking they’re stuck with one another now. Until now, Kratos was always away ‘hunting’ and Atreus knows nothing of his father’s past. We’re left to fill in the gaps ourselves for the intervening years since we last saw Kratos, but it’s hard to feel sympathetic towards him given he seems to have wasted this second chance at family life. Long-time players may have expected better from him given the closure he seemed to achieve concerning Calliope and Lysandra after conquering Olympus. 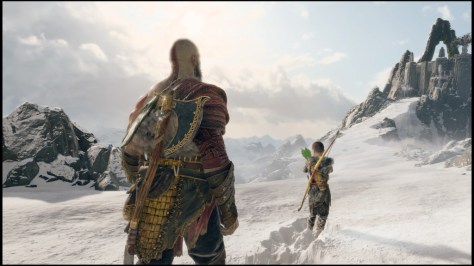 Perhaps still haunted with guilt and conflicting emotions about his Grecian rampage, Kratos has clearly struggled to adopt a normal life once again. And now that his second wife is dead too, he knows he’s wasted too much time and the boy serves as a constant reminder of everything he’s lost.

Kratos needs to set out on a journey though and must take the boy, despite openly feeling Atreus isn’t ready for travel, both physically and mentally. Kratos’ brutal Spartan warrior upbringing is clearly not something that was encouraged for his new son. But with Atreus’ mother gone, literally on her funeral day, he takes the boy hunting for the first time and provides unsympathetic advice throughout, “Don’t be sorry, be better.” 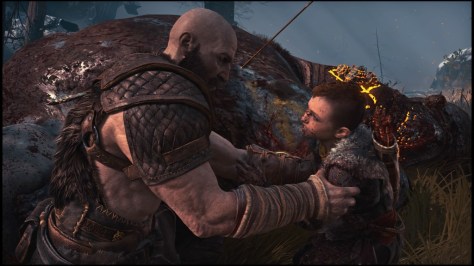 There’s no ignoring the narrative influence of games like The Last of Us, Bioshock Infinite or Telltale’s The Walking Dead on Kratos’ new story and given the series’ previous-one note tale of vengeance, it’s a great change. Don’t get me wrong, Kratos is incredibly unlikable for at least the first quarter of the new God of War, but Atreus keeps you invested in the story. Unlike most child characters in games/TV/movies, he’s refreshingly not an irritating brat. He’s grounded, humble and keen to learn, making his desire to please his father all the more endearing and making Kratos look like an even bigger arsehole every time he snarls a rebuke at him.

Atreus, despite his father’s comments, is actually very handy in a scrap too. Instead of directly controlling him, you can ask him to fire arrows at any foe you’re facing. As time goes on, you can upgrade his skills to included elemental attacks and team-up combos. He’s very much a support scrapper though compared to his father at this age. 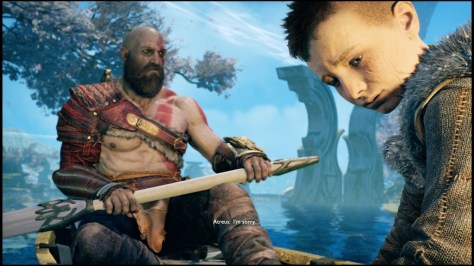 Kratos’ new axe drastically changes combat in God of War and, on the default difficulty setting, fights are much harder, recalling Dark Souls a little as enemies can take you out in surprisingly short time if you’re not careful. It’s a solid change overall, with a closer camera and a tighter focus on smaller enemy groups making each individual scrap more meaty and memorable compared to the old days of holding down L1 and Square and letting the Cyclone of Chaos move rack up 50 hit combos like an angry flaming weed whacker.

Weak and strong attacks now reside on the R1 and R2 buttons, making the Souls comparison spring to mind again. I’m not personally convinced putting these actions up there on the controller was a wise move as they’re not the most comfortable buttons to hammer away at if you’re heading into combat-heavy areas for a while. 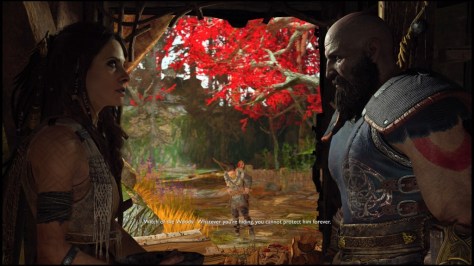 Kratos can throw the axe at enemies and continue bare-handed until recalling it. Axe recalls can be lined up and timed to great effect to rip through enemies on its way back, which is particularly satisfying when it comes back and finishes off an enemy who’s about to run Kratos though. It’s a great new mechanic for Kratos, even if Ratchet & Clank fans have been enjoying a similar move for years now.

Upgrades are slow to come by and there aren’t any particularly lengthy combos to remember, so if you were looking for Kratos’ old fighting style to have a crack at Bayonetta’s throne of beautifully in-depth combat choices, you might be disappointed. Magic, or Runic attacks, only play a modest part and generally come in the form of cooldown attacks. There are lots of these to unlock but you can only equip two at a time, which feels a bit reductive. Surely some of these could have been unlocked as combos, especially when some are clearly considerably better than others and there’s little point in changing some of them for hours at a time.

Loot and armour plays a big part in the game now, along with extra sockets for stat boosts. It’s a fairly deep system, but genuinely better armour is a rare find. You’re always seemingly losing one set of stats to grow another, arguably making the case of just sticking with what you already have. Buying armour early on can be very expensive too and there’s always the risk you’ll find some for free on the next quest. Welcome to RPG trope land, Kratos.

God of War on PS4 joins the open world crowd too, although it’s less open world and more lots of different areas connected by lengthy corridors or fast travel points. The central hub takes place on water though and you’ll use a boat to navigate multiple islands and coastal opportunities to pick up side quests or general trouble. 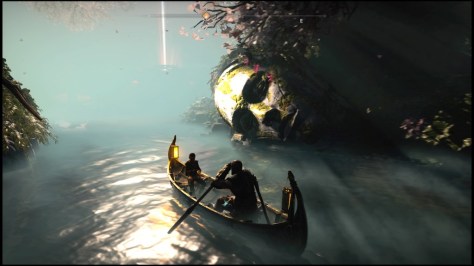 The side quests side of the game is handy to grind for XP, get more loot and it’s something you will need to do on the standard difficulty as enemies get tougher in the campaign as you get deeper into the story, so you’re going to have to bulk up to progress. Or just knock the game’s difficulty down a peg and you should be able to progress without too much grinding at all.

You would think the local characters in the game would have Norse accents, but no, not one. Seriously heavy American accents are rife throughout and you’ll have an almost constant Scottish voice in your ear too. It’s a missed opportunity to add some Scandinavian flavour to the game and a poor choice. On the plus side, the new voice-actor for Kratos does a fantastic job, he still sounds like Kratos, but an older weathered version capable of angry Kratos and fatherly advice giving Kratos.

Graphically, Kratos’ adventures have always been a powerhouse on Sony’s console and 2018’s God of War is just flat out ridiculous. It’s taken years for Sony to take Kratos on a Norse adventure, but boy are we glad they waited for the PS4 as this is a devastatingly good-looking game in just about every way.

Only Uncharted 4 (including Lost Legacy) and Horizon: Zero Dawn comes close, but in all honesty God of War, might have them beat too. Shimmering and serene lake waters, the way the thick snow parts with every footstep, the views of mountain range and colourful forests make up some of the best scenery on PS4 and the level of detail on Kratos’ face and every piece of equipable armour is reason alone to get a 4K HDR TV and play this on a PS4 Pro. You’re going to be hitting that share button for screenshots a lot (all images in this review were captured on the PS4 Pro). 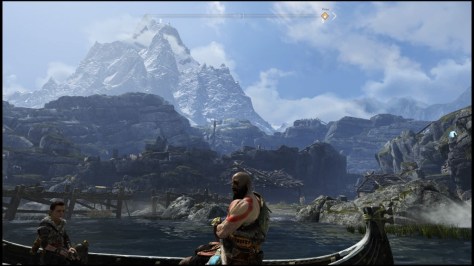 God of War on PS4 is a huge departure for the series, but it does not exist in a vacuum. The combat is more careful and considered than the old button-mashing days without straying towards Dark Souls too closely, but it ultimately lacks the depth and variety for a game of this length (about 40 hours) even as you unlock more options later in the game. And the step into a more open world layout is a first for the series, but its corridor-linked design can feel clunky when compared to the current open world king, The Witcher III. There’s not an awful lot of side quests to complete away from the main quest in all honesty either and the endgame feels like an optional grind for trophies and gear rather than anything offering a tangible sense of reward.

In fact, as I write this though, reflecting on the way the story gripped me, the cinematic scenes and the last-gasp victories, I might just start the game over rather than continue grinding for the Platinum, especially as a new patch for a full-on photo mode has just been released. Not that I need much convincing to go back. 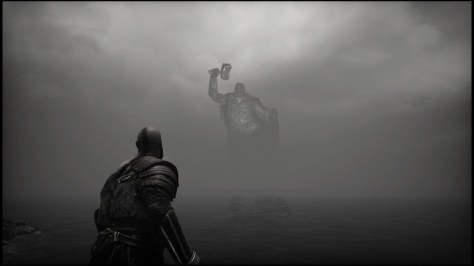 Overall: God of War is greater than the sum of its parts, especially if you’ve been following Kratos’ journey since the PS2. Sony Santa Monica’s reinvention of the series makes incredible strides at humanizing Kratos beyond the blood-soaked psychopath of the old games into a more relatable, yet still incredibly damaged character. Atreus could have been a hindrance to the story and combat, but he binds everything together for both Kratos and the player, bringing the God of War series into new territory both geographically and emotionally. While clearly holding something back for the sequel, Sony Santa Monica has a seriously tough struggle ahead to top what has become one of the best PS4 games yet.