Insomniac live up to their name once again by providing another Ratchet and Clank game that’ll keep you playing long into the night. The only problem facing the series is the lack of competition to keep it on its toes. Nevertheless this is still an awesome addition to the series.

Following on from the end of Tools of Destruction and Quest for Booty, Ratchet is still looking for his robotic side-kick, Clank, who has been kidnapped by the returning nut-job, Dr. Nefarious who wants to use Clank to gain access to the Great Clock that controls all time in the universe. So yeah, there’s a fair bit going on, but there’s a quick summary at the start of the game to refresh your memory and ease in newcomers (welcome by the way).

Your companion early on is a brilliantly on-form Captain Quark who’s as much of a crap-shot and utter coward as ever and provides lots of laughs along with Nefarious. Quark gets kidnapped early on though (he must be catching up Kim Bauer by now). So Ratchet teams up with a new ally, but I won’t spoil anything.

Control alternates between the two separated heroes and their separate adventures. Ratchet’s jumping is hampered as it was in Quest for Booty, due to Clank’s absence or more importantly his handy jetpack. You get some hover-boots to glide, move quicker across ground and boost over ramps but it never matches Clank’s assisting abilities from older games.

Ratchet does have one newish move that is a tweak of the Comet Strike, where he throws his Omniwrench with it following his position and coming back to him. But this time he won’t stop to throw it, instead he throws it without breaking his stride and can even do it mid-air. It doesn’t sound like much but it really opens up the combat and lets you open crates much quicker.

That’s about it though as far as new moves and abilities go, in fact he’s got less nowadays as the wall-jump has gone missing. One of the new gadgets sucks up liquid that can be used to oil rusty hinges and cranks, or distract ferocious termites with sticky goo, or cool down red-hot platforms. There’s still a quality range of weapons for him to fall back on though, even if there are oddly less than the first PS3 game.

Of course, you start the game with a crappy blaster as once again Ratchet seems to have lost every weapon that you bought him last time out, even the bomb-glove. The Jerk. Most of the weapons are the same or a variation on older ones. The best new one is the Sonic Erupter which is a creature that unleashes a shotgun like burp that can be weak or devastating depending on when you time the shot in-line with its breathing. It can be immensely powerful when timed correctly and provides plenty of tense moments when you get swarmed desperately waiting to fire off an optimal shot.

Past favourites return like the Groovitron that makes everyone stop and dance, giving you some time to regroup and the much improved Mr. Zurkon back-up robot that kicks more ass in one level than Clank ever did and is a bit of a psychopath to boot.

The weapons have five levels to level up simply by using them. They’ll do this alarmingly quickly which is definitely a good thing here, with each level boosting their stats. You no longer adjust your weapon perks and abilities with raritanium on a grid with multiple branches for rate of fire and ammo and so on. Instead you pick up optional upgrades hidden in levels or given as rewards. They can make a bomb glove blast upwards instead of across, change the blasters fire into lasers or charged shots, or change a shotgun to a wider shot or a more concentrated narrower one.

It doesn’t seem to offer as much freedom as the previous game’s upgrade system though as you are restricted to only adjusting that part of a weapon when you find it rather than buying it when you have enough raritanium. It only applies to a few weapons too.

You do need bolts to buy the weapons though and you should re-install the game data for Tools of Destruction as it’ll get you half-price discount on any old guns. Bolts are absolutely everywhere and it’s constantly addictive trying to hoover up every one of them. As well as crates and breakable objects they’re even in the grass, bushes, crystals and many other parts of the landscape, meaning you never really have to empty your pockets when the latest toys arrive at the store. There’re plenty erupting from defeated enemies too.

The bad-guys are a mix of buzz-saw wielding robots, walking gun turrets, and brutish orange aliens along and smaller swarming minions. If you’re struggling to take any of the larger ones down, they’re usually susceptible to a certain weapon so experimenting will pay off. Ratchet’s Omniwrench can be pretty destructive too if you just want to dive in or you get desperate when you run out of ammo. The varied (if a little overly familiar) guns and the controls are a gaming treasure and the sheer amount of action going on in some fights is a madness of the most enjoyable kind.

Alas, the bosses feel very generic which is disappointing. There’s the hydra-tank and a giant UFO amongst a few forgettable others. The UFO has a little variety as you use your magboots to traverse its sides to unscrew some panels, but generally bosses have to be shot with every last bit of ammo of all your weapons to gradually eat away at their health with little visual feedback on their impact. Instead you just run round in a circle them blasting them while jumping over floor-sweeping fire attacks, ad infinitum.

As well as the usual planet missions, Ratchet gets to do a bit of space exploration and investigate the planet’s nearby moons. These are similar to past games but in much greater numbers and rewards ranging from gold bolts, upgrades or extra Zoni (essential for upgrading your ship). These moons are deceptively large but should take no longer than ten minutes to finish the platforming ones and less for the ‘kill everything’ ones. Your galaxy map handily tells you when you’ve got everything from a planet or moon if you want to collect every last thing in the game. The moons are so damn addictive with cases of one-more-moon turning into another six. That pretty much sums up the whole game to be honest, there’s always a reason to keep playing. 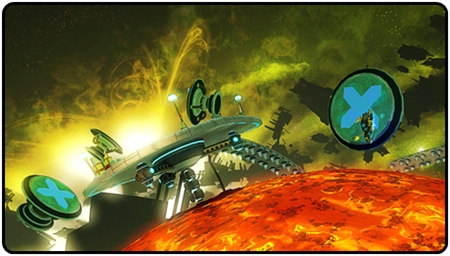 The space ship shooting levels are similar to before but with more directional control over your ship instead of forwards only travel. There are even a few radio channels to listen to including what I’m pretty sure is ITN’s music for the news updates. But you don’t spend much time flying so it hardly seemed worth the effort really.

Clank’s missions are a much more relaxed affair as he has to watch over the universe’s time control. They come up at intervals to Ratchet’s adventures, but not very often. Some much needed variety is thrown into the game here with a neat twist to button-panel operated doors. Clank has to record himself multiple times performing actions with hardlight holograms to open areas, stay on pressure pads and activate platforms. Initially a little baffling but it all clicks once you get the hang of re-recording over past runs to shave off a bit of time or gain access to a previously blocked path that one of your recordings has opened up for you. The optional puzzles are absolute monsters, but feel very rewarding once you master them. You’ll also use a laser on a giant globe representation of a planet to fix any time anomalies which is a fun, fast-paced shooting mini-game.

There’s only about six hours play if you rush through, but you’ll find yourself playing longer than that to collect the rest of the Zoni, gold bolts, parts of the holoplan to build the mighty Ryno V gun and pick up any stray Trophies and Skill Points. Once you do complete the game the bonus mode is unlocked which returning players will be familiar with. It’s a tougher version with a bolt multiplier thrown in depending on how many kills you can chain together, adding even more carnage to fights.

If there are any flaws in the game it revolves around Ratchet’s missions. They haven’t really changed since the PS2 days and some of the platforming can be annoying as he has developed a bad habit of not grabbing onto some platforms and just slipping off their edges like he’s hit an invisible barrier and he physically can’t perform a sideways strafe jump off a platform. There are fewer planets to explore, although this is offset by the extra moons. There’s no excuse for the smaller number of weapons and gadgets though and also multiplayer hasn’t been seen since the PS2 days.

It’s feels harsh to criticise a game I enjoyed so much for not really attempting to do anything new and having the same (admittedly good) graphics as 2007’s game. That’s because the chaotic gunplay and the desire to level everything up and discover every last collectable is utterly compelling. A Crack in Time is one of those games that as soon as you finish it, you’ll quickly shrug off any disappointment over the length and start a new game just to do it all over again. Just imagine how good a game Insomniac could make if there was actually some competition to make them really put the effort in.

20 thoughts on “Ratchet and Clank: A Crack in Time (Review)”