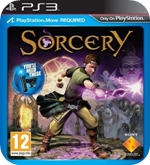 The magic the PS Move has been waiting for

Delayed for years and almost forgotten, Sorcery makes a late bid for attention on the criminally under-supported PlayStation Move. Considering most Move titles are based on sports, minigames and dancing, there’s no denying the potential excitement offered by a full-on adventure title that takes advantage of the motion controller and the often forgotten navigation controller.

Unlike the on-rails action of Medieval Moves, Sorcery allows complete control over your character’s movement. This can be done by holding a PS3 pad with just your left hand for the analogue stick. Or better yet, use the navigation controller (like a Wii nunchuk without the annoying cable) for the first time since Killzone 3.

END_OF_DOCUMENT_TOKEN_TO_BE_REPLACED

Summary of the News articles I’ve posted at Dealspwn.com in June 2011.

END_OF_DOCUMENT_TOKEN_TO_BE_REPLACED

There are no details on a release date as of yet, we imagine there’s still some time to go. The last sign of life we had from the developer, The Workshop, was a job listing at Game Guzzler for a UI (User Interface) Artist, posted back in May this year.

END_OF_DOCUMENT_TOKEN_TO_BE_REPLACED

The world’s biggest game show continues in LA with E3. It’s Sony’s turn to take to the stage and stake their claim for bragging rights for the next year of releases. 3D gaming is gets a real push and like Microsoft, motion control is going to be play a big part in the show. But will they be ignoring gamers in favour of the casual market too? We’ll tell you below while also looking at some proper games. END_OF_DOCUMENT_TOKEN_TO_BE_REPLACED