Looks like Ready at Dawn Studios have done it again. They’ve only gone and made the best action title on the PSP, again. God of War: Chains of Olympus provided a PSP prequel to the original PS2 game and now Ghost of Sparta looks to fill the gap between God of War 1 and 2.

The story follows Kratos as he searches for his younger brother, Deimos, who was taken from him when they were both young Spartan children. We finally get some answers about Kratos’ facial scar and his red tattoo. We also get to find out what really happened to the legendary city of Atlantis.

END_OF_DOCUMENT_TOKEN_TO_BE_REPLACED

To all PSP Minis developers: more simple games like this please. At £1.99 this is ideal for a quick blast. This shoot ‘em up title has you controlling an Apache helicopter for 99 levels of traditional side-scrolling shooting. It’s simple, fun, and it shares a similar art style to the Metal Slug games. What more could you ask for at £1.99?

The controls are responsive and the helicopter feels nippy but weighty as it tilts forwards and backwards with momentum allowing you to fire upwards or downwards sometimes without having to move up and down yourself, handy for staying in one piece under a torrent of missile fire. Enemies go down very easily and you can take quite a lot of damage as you have a health bar rather than having to cower under a one-hit-kill policy. It’s a balance we can all enjoy. END_OF_DOCUMENT_TOKEN_TO_BE_REPLACED

Sony hasn’t given us any real indication that a second PSP is on the way anytime soon. But that doesn’t mean the net hasn’t stopped trying to unearth any details via rumours, scrupulous checking of tech trademark registrations or the CVs of every tech developer on LinkedIn every two minutes. But what would we actually want from a PSP2? Here’s a list compiled from my own thoughts and general grumbles from fellow gamers. END_OF_DOCUMENT_TOKEN_TO_BE_REPLACED

Young Thor is a traditional side-scrolling platformer / beat ‘em up title. It follows the journey of Thor on his way to rescue four maidens from Hel, ruler of the Norse Underworld.

Combat is pleasingly simple and the lack of depth is hidden by the way you can attack enemies in different body parts for better effects. Numbers fly off enemies to indicate the damage done and when these numbers turn yellow, you know you’ve just discovered a weak spot. For example, the best way to deal with the tall trolls is to jump over them, turn around in mid-air and give them a crack to the back of the head. END_OF_DOCUMENT_TOKEN_TO_BE_REPLACED

The world’s biggest game show continues in LA with E3. It’s Sony’s turn to take to the stage and stake their claim for bragging rights for the next year of releases. 3D gaming is gets a real push and like Microsoft, motion control is going to be play a big part in the show. But will they be ignoring gamers in favour of the casual market too? We’ll tell you below while also looking at some proper games. END_OF_DOCUMENT_TOKEN_TO_BE_REPLACED

Rather than use missiles and the like to defend their city, these citizens have decided it’s easier to fly onto these giant approaching warships and saw parts off them until they crash out of the sky. Bizarre, but brilliant. It’s a bit like an inverted update of the retro game Qix.

The story doesn’t exactly grab you, but it’s charmingly animated and the mad gibberish language that everyone speaks may give gamers fond memories of Okami. It’s the gameplay that’s fantastically strong here though. It’s alarmingly simple, yet has that vital ‘one-more-level’ feel to it. END_OF_DOCUMENT_TOKEN_TO_BE_REPLACED

Deflector is a basically designed yet challenging puzzle game, similar to some mini-games you may have played in bigger titles before. The aim is to deflect a laser beam into a receiver on a complex grid with you looking at it from above.

This is done by placing mirrors on the grid and rotating them to bounce the laser off in a new direction. Before setting the mirror in place you must make sure -via a dotted line that indicates the resulting path of the laser- that it will not hit any environmental objects that will end the game. These objects include apartments, trees, bombs and explosive barrels. Take a quick look at this video for an example of the early levels. END_OF_DOCUMENT_TOKEN_TO_BE_REPLACED

Forget all thoughts of motorbikes and possible cheap Road Rash thrills right now. This is a game that has more in common with the Where’s Waldo books that everyone had in the 1990s, albeit considerably less congested. It’s actually pretty damn good too.

Instead of looking for people, you use a cursor to find eight objects cleverly hidden onscreen in a scene picture from one of the many locations along the eponymous Route 66. You scroll around the picture with the analogue stick and move a cursor with the d-pad, selecting items with X. The items can range from broccoli to Buddha’s, hazelnuts to harmonicas and pinecones to peace signs. They’re very specific too, so don’t go thinking boot means shoe or anything like that. END_OF_DOCUMENT_TOKEN_TO_BE_REPLACED

After becoming something of a cult classic on the PlayStation Network it was only a matter of time before somebody realised this would work even better on PSP. For those of you who haven’t played the PS3 version this is a tower defence game. You build defence towers out of trees, using a limited supply of money in order to defend your village’s twenty inhabitants from multiple waves of invaders.

The towers are designed to be effective for ground or air attacks with some of them spreading themselves thin to do both. There’s plenty to choose from if you can afford them. There are canons, freeze guns, Telsa (electricity spewing towers), mortars, flamethrowers, crossbows, anti-air guns, lasers and electric barriers. END_OF_DOCUMENT_TOKEN_TO_BE_REPLACED 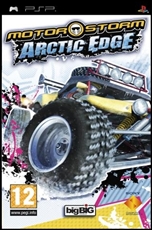 They’ve done the desert and the tropics so now the MotorStorm tour has decided to cool off and head to the Arctic. There are 100 events to rip through in such frostbitten locations like ice caves, mud bowls, gargantuan bobsleigh tracks (or should that be tubes?) and mountain passes.

The biggest problem facing the PS3 MotorStorm games is they don’t exactly ease you in gently. And if the general lack of interest for last years rock hard sequel has shown anything, it’s that the series needed to relax a little.

Apparently new developers Bigbig Studios may have agreed, as it’s obvious from the off that this time around you’ll be winning races early on and not constantly begging for a top half of the field finish. END_OF_DOCUMENT_TOKEN_TO_BE_REPLACED

A brand new Kingdom Hearts game is set to appear on the PSP in 2009 entitled Kingdom Hearts: Birth by Sleep. It is a prequel to the first game, taking place ten years earlier. END_OF_DOCUMENT_TOKEN_TO_BE_REPLACED