It’s time for Sony’s flagship shooter to really step up as the shooter genre swells with top titles like Black Ops, the Battlefield series, Bioshock, Halo and newcomer Bulletstorm, who are all fighting for gamers’ hearts and cash. Our wishlist: cinematic Campaign mode, multiplayer, local co-op Campaign, Move support and jaw-dropping graphics. Can Killzone 3 really pack all this in?

After a brief intro level the game picks up immediately after the events of Killzone 2 with you once again lacing up the boots of Tomas ‘Sev’ Sevchenko. Visari may be gone, but Earth’s ISA troops still need to get out of the decimated Helghan capital city of Pyrrhus if they want to stand a chance of escaping the planet. Soon enough there’s a six month leap forward (my money’s on a PSP2 game to fill the gap) resuming with you stranded out in the Helghan wilderness. 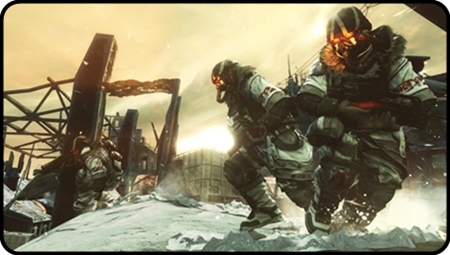 While the ISA have been hiding, the Helghast have been stuck in a power struggle between two men who want to step into Visari’s dead shoes. Jorhan Stahl, a weapons manufacturer, voiced by an incredibly on-form Malcolm McDowell, stands opposite Admiral Orlock, voiced by Ray Winstone. This pairing of British talent produces some fantastic scenes that really pull you into the story in ways that the last game never did. The way that McDowell’s Stahl looks like the world’s evilest Thunderbirds puppet just makes him even more sinister and a worthy successor to Brian Cox’s Visari.

The dialogue scenes with the ISA members are flat and clichéd in comparison. That’s easily forgiven though, thanks to the action and relentless flow of wow moments throughout the Campaign. One of the later boss fights will leave you stunned and gaping in awe at the sheer scale of it.Vanquish and Resistance suddenly look very small.

If you’re waiting for me to say how Killzone has finally discovered a wide range of colours then you must be drunk. That jungle level you’ve been waiting for? It’s just rocks with a few brightly coloured (and occasionally deadly) bushes. Rocks with extremely fine detail though.

You’ve got to feel bad for the guys at Guerrilla who’ve painted themselves into a corner a bit with Killzone’s concrete, metal and rust palette. But it is at least in keeping with the Helghan universe. They’ve stuck to their guns and have put a huge amount of effort into making these staid colours look absolutely incredible and beautiful in their own unique way. Hats off to them.

The missions follow a familiar format of working your way through areas full of Helghast, either through linear paths or defending an area from terrifying assaults that throw in new mech enemies that look like metallic versions of Dead Space nightmares. Another new enemy-type, the sprinting blade wielders, even look like Isaac Clarke.

There are numerous vehicle sections, most of which are on rails. The best one has to be the assault on the oil platform over a stormy winter sea in the middle of a blizzard. Not long after that section you’re given the jetpack to hop around and blast away with the attached machine gun. It’s great fun, but way too short. At least it’s available in multiplayer too.

The stealth mission is a throwback to the feel of the jungle/swamp level of the first game, but now with the addition of lots of caves and tall grass to use for stalking and preparing brutally bloody melee kills. Eye-gouging, eye-knifing and throat cutting are just a taste of how to dispatch the Helghast with a tap of R3. While great to look at, they’re time-consuming and leave you open to a back-full of bullets from other targets.

You’re going to die a lot, but at least your dumbass partner, Rico, has finally learned how to use the revive gun to bring you straight back into the fight. Occasionally he goes a bit Army of Two-style stupid though and runs around while you just lie there gasping at everyone’s feet like a defenestrated goldfish.

Some of the game’s finest achievements are in the little details that Guerrilla have fixed since K2. The cover-system has been fixed with a simple toggle feature, freeing up your finger to aim. The overly-heavy aiming has been loosened up to bring the game in line with the competition and the Helghast aren’t quite as tough to bring down anymore.

The grenade indicator has gone, now you have to rely on listening to the beeps and look out for its flashing light. Terrifying, but definitely cool. Almost as cool as now being able to slide into cover by pressing the crouch button when sprinting.

The weapons have been tweaked too. Guns like the LMG don’t recoil as wildly and the standard Helghast rifle now has a dotted sight like the ISA’s gun meaning it’s not such a second-rate weapon anymore. Although, thanks to the increased amount of ammo containers lying around, you can keep feeding any weapon you find.

There are plenty of bang-tidy shooters clamouring for your attention too. At any time you can hold one weapon in each of the three categories (side-arm, main and large) instead of just two like last time. The standard pistol’s ranks have been bolstered by a triple-barrelled shotgun pistol (just beautiful) and the triumphant return of the silenced pistol with single or automatic fire. All pistols come with infinite ammo too. Bless you, Guerrilla Games.

In the other categories the bolt gun now comes with exploding ammo and there’s a new variation on the Arc cannon that I’ll not spoil for you. The WASP launcher fires tank-shredding artillery rockets from above or a burst straight at groups of soldiers. If you decide you really like a mounted turret you’ve just cleared an area with, you can now snap it off and run around like a madman with it. All those extra ammo boxes mean you don’t have to play conservatively either. Just have fun.

F**king A! We finally have a game that’s managed to incorporate the PlayStation Move motion controllers into an existing franchise. This is easily the best use of the Move since Sports Champions. Instead of being an alternate setup you’ll use for five minutes before going back to the pad, Killzone 3 drags you into the fray by the wrist-strap and refuses to let go until you’re utterly stunned by it all.

So how does it work? The navigation controller acts like the left side of a pad with analogue movement and an aim button. Cross-hair aiming, camera rotation and shooting are handled with the motion controller. Use the settings menu to adjust your deadzone (how far you move the crosshairs around the screen before the camera moves) and turning speeds to your liking during the first level while you’re not getting shot at.

You can aim down the sights by tapping the aim button and there’s an auto-lock feature (hold the aim button) that will snap your sights onto an enemy with deadly precision. It really lets you hit the ground running once you get into your first proper fight. For tougher difficulty settings and multiplayer the auto-lock is disabled, so it’s best to start out on the easy settings until you get used to moving around.

You get into cover by pressing the Move button and reloads are handled by a press of Square or twisting the Move controller. Both are a little awkward, to reach and as a strain on the wrist respectively, but it’s workable. Moving around will take a while to get used to, but it’ll come to you quicker than you think. Focus on improving your footwork, as shooting will be second nature by the end of the first chapter.

Any other problems? None at all. You can play sat down without the camera getting angry and even left-handed folk (myself included) needn’t worry about the weirdness of aiming with your right hand thanks to the auto-aim, which will help you build up the confidence to go manual soon enough. You can fire from the hip too which gives you a wider view and surprising accuracy for the stance, which usually fires wildly.

You’ll have to check out our upcoming multiplayer review to see how the online modes and local co-op for the campaign shape up. Even if they turn out to be a bit meh (not likely if the betas have been anything to go by), I can safely say that Killzone 3 is still an essential purchase and arguably the finest shooter seen on the PS3, maybe on any format.

The Short Version: All the little things that stopped the last game becoming a classic have been smoothed out and fine-tuned. Planet Helghan might not be made up of rainbows, but it’s a fine setting for some of the best graphics ever seen in gaming. It’s not just technically brilliant either, the campaign’s incredibly good fun to play through too, thanks to some varied pacing and a healthy mix of assaults, stealth, vehicles, on-rails shooting and plenty of ‘holy shit’ moments.