Fast-Tracking to the Big Guns

Guerrilla Games know they’re up against it when competing for our time in the busy arena of FPS multiplayer games. How do you encourage gamers to give you a fair shot when Call of Duty and Battlefield are so dominant? How about unlocking all the core features from the start?

All weapons and class abilities will be available without the usual grinding; enabling you to try everything and discover what combination works best for you. This is a great idea and allows for a more even playing field for newcomers against players that have been living in the servers since launch day.

The XP system has been overhauled to reward skill rather than time committed to the game. This involves ticking off a series of over 1500 challenges like using specific weapons for kill milestones, headshot goals and so on. The rewards will come in the form of weapon attachments like extra scopes or secondary ammo, incendiary or buckshot for your shotgun for example. 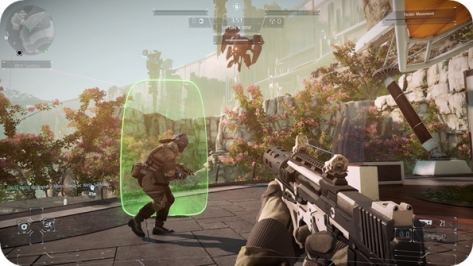 There’s a big focus on Warzone modes created by the community this time. These editable modes allow players to choose specific settings for matches. For example, you can limit the number of respawns, number of players, how long the spawn waves are, toggle friendly fire, allow or ban cloaking or even choose which weapons will be available. The way players are ranked on the scoreboard can be tweaked too. So if you’ve set up a sniper match you can make sure that headshot kills are given top billing.

You can save these settings and upload them to the servers, with the most popular ones displayed on the main multiplayer menu. With such a big push on these user-generated missions, we hope they at least remain ranked matches. Usually in FPS games, customisation of any modes makes matches unranked – well unless you’re the mighty Timesplitters: Future Perfect.

At launch, there will be ten maps available. That’s a solid number and we’re pleased to hear that future competitive DLC maps will be available free of charge, so the player-base won’t become fractured. Nice work guys.

So what’s the season pass for then? For the price of $19.99/£15.99/€19.99 it will include an expansion of three online co-op maps and a drop of new modes and options that we’ll be hearing about soon. The co-op is going to be arena based, so it might be worth waiting for some hands-on reports before forking out for the pass, but we’re stoked about normal MP maps being free.

There have been a few features cut since Killzone 3. Like Operations Mode, where MP matches were given cutscenes that brilliantly framed your actions. Although, when pressed at a Q&A at the Eurogamer Expo, Lead Designer Eric Boltjes hinted that we may see it return in the future. Splitscreen has also been ditched in order to keep the game looking as smooth as possible.

The battlefield where I got my first Shadow Fall experience was in an area that had already seen some heavy fighting. Forget cloud-high city centre utopias, this place clearly had the signature ruin of a Helghast invasion.

The graphical detail was hard to pick out in the dark nighttime map, but the lighting provided by the storm and the odd light was exceptional, giving off some excellent shadow effects amongst the lashing rain. Multiplayer is targeting 60 frames-per-second, with it only dipping in extreme circumstances, such as all 24 players throwing a grenade at the same time.

The map involved open ground bookended by the bases of the ISA troops and the Helghast forces. The middle ground had two layers, rough trenches for lots of close quarters combat or the open land above which provided targets for snipers, but also semi-demolished structures to dart inbetween for cover for anyone making a run for it. A balance well struck.

With a strongly varied landscape to engage the enemy in, we’d needed some strong class options to choose from. Shadow Fall may only have three classes, but their additional skills and the changes allowed within them should meet your needs.

The Assault class is your standard mid-range run and gunner. You can hide behind his deployable nano-shield, yet shoot through it from your side. This shield has a bright luminescent glow though, so it stands out a mile and potentially gives away your position, especially in darker maps. I was able to use that to my advantage though, drawing in players who thought I might have been crouched behind it while I flanked them from the sides. Other assault abilities to equip include stun blasts and a buddy drone to watch your back.

The Scout is your tactical long-ranger. The cloaking ability has been scaled down thanks to community feedback. A tactical echo lets you briefly see enemies through walls and a handy teleport feature lets you retreat when you get into trouble.

The Support class is all about helping your teammates. There’s a revive drone for healing downed allies, air support drones for laying down fire, turrets, supply drops and a support teleport to catch up to your friends in the heat of battle. The spawn grenade has been replaced with a spawn beacon to create new spawn points on the map, saving players from a lengthy run each time they bite the dust. The beacon must be manually placed, taking longer to deploy than the spawn grenade, enabling better balance. The beacon can now be destroyed too, which pinned down teams will be very grateful to hear.

Players will have multiple weapons to choose from within each class and will be limited to how many abilities they can equip at a time, so the three classes will actually provide a hell of a lot of depth. The options were locked down for my session, so I wasn’t able to try many different weapons, but having played all the games in the series, I’m sure I’m not going to be disappointed. I’m loving that secondary fire options are back in too, especially after being reminded why they were so damn important in last year’s Killzone HD.

It was a shame I couldn’t try some different weapons though as many of the default ones had an absurd amount of muzzle flash when aiming down the sights, so much so I’d lose track of my target. Looking at some other footage of the different weapons though, I can see this isn’t a widespread issue, so I won’t have to run around firing from the hip all the time.

Not much has changed with the way matches play out. We found ourselves completing a familiar mix of team-based objectives in that unique Killzone manner where the modes change on the fly. Team deathmatches, capture and hold, search and destroy and so on were thrown in one after another.

The heavy feel of the series is still there, but there are new opportunities to jump and pull yourself up ledges. It’s hardly Mirror’s Edge, but it’s nice to see a bit more verticality to Killzone’s game. Jumping across some gaps seemed odd though as I kept hitting an invisible wall just short of landing on the other side and repeatedly getting dumped into the trenches. A glitch or maybe an animation abruptly ending? Hopefully, it’s the former as I could do with making that jump when I return to the game in November.

The devs claim that they‘ve gone to great lengths to combat spawn camping by including multiple exit routes from the bases, bumping up the auto turret defences and increasing the entrance space before the battlefield. The multiple exits are indeed useful, as I found the opposition easily nailed down some exits during my playthrough. The longer entrance space isn’t particularly welcome though as the slog back to the action is by far the most annoying aspect of respawning in shooters and making this even longer is just not cool. Respawn loading time is a mere three seconds though, which definitely gets my approval, not that I had to respawn much, honest.

The State of Play: Killzone: Shadow Fall is making a strong case for your attention on release. While we would have liked to get our hands on the campaign (easily the strongest aspect of the series in my opinion), it’s good to see the multiplayer taking strides to improve.

Unlocking all the weapons and abilities from the start removes that barrier of having to grind to get the gear players want to avoid getting their ass handed to them by the rest of the community when they first join up. When a game is vying for attention in the most competitive genre in gaming, this sort of open accessibility and the promise of free DLC maps are fantastic incentives that could well pay off for Sony’s flagship launch title.