There have been many HD re-releases over the last few years and it’s always a tough ask when the game was pushing the original hardware to the limit. Exactly how much more can we expect from a HD remaster? Rest assured though, Killzone HD looks, and more importantly, still plays exceptionally well today.

I was worried that having been such a fan of the original game, I may have been remembering the visuals with rose-tinted glasses and the HD reworking would shatter those memories. Thankfully, the game looks fantastic today and pulses with graphical finesse. It’s fortunate that the original game featured a texture-friendly grainy filter and a lot of mist, which transfers well today, giving the game a distinguished look. 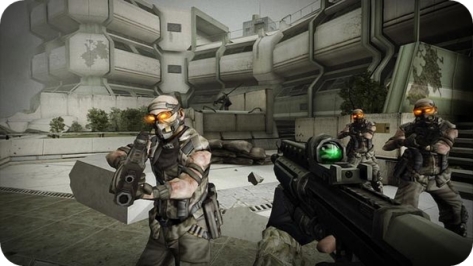 Sure, there are many unspectacular concrete buildings to look at, but the war torn atmosphere, backed with superb sound design of distant shelling and gunfire make taking ground on Vekta a tense experience. Killzone can dial it back though, as shown with the jungle and swamp missions that favour a stealthy approach.

The cutscenes are the only disappointing part of the game in terms of visuals. The acting and the script are still top-notch. But visually, the resolution seems to be very low and on a few occasions, I was made aware that the visuals might have been zoomed in to get the new widescreen effect. Talking head shots seemed to be missing too much chin and the like. Saying that, Visari’s opening speech, voiced by Brian Cox, is still one of the most spine-tingling introductions in gaming.

Killzone was a huge influence on many FPS features of today’s games. Lengthy and intricate reload animations? Right here. Seeing your hands on ladders or when vaulting over low walls? Killzonetoo. It was these little touches that elevated the game above the competition in 2004 on the PS2 and they help the game stand proud today.

The guns are fantastically varied and warrant trying them all. Take the two basic assault rifles. The ISA version is more powerful, but shakes when fired, while the Helghast weapon is more accurate but spits weaker bullets. The secondary fire of both weapons wary too, the ISA has an underslung grenade launcher, while the other has a single-shot shotgun round, perfect for finishing off an enemy when your main clip nears exhaustion. The only downside to these secondary functions is that they automatically reload afterwards which can be dangerous when you’re in the middle of a fight.

The other weapons take the form of chainguns, sniper rifles, rocket and grenade launchers, shotguns, knives and pistols. Most feature secondary modes, which fire multiple rounds at once or timed rounds for the grenade launcher. These extra functions feel very welcome, as today’s gaming has largely abandoned the feature. What may take a little getting used to is the lack of iron-sights aiming. Most weapons allow you to zoom in a little, which does up your accuracy somewhat.

A common criticism of the game when originally released still sits awkwardly with it today. The amount of fire needed to take down many of the Helghast soldiers is utterly ridiculous. This was fixed in the later games and we saw the introduction of some groundbreaking physics as every bullet had a notable impact. Here though, you can empty a full clip into an enemy’s chest without breaking his stride. Or you can shoot them twice with Luger’s silenced pistol secondary fire. Rather than let it ruin the game though, it forces you to take care when entering an area with multiple opponents.

You have a health bar that will regenerate small amounts. It’s essentially broken up into three areas that will cut off when so much damage has been taken. It’s similar to the health bar in Resistance: Fall of Man on PS3. Mid-level checkpoints are very sparse, leading to few jaw-dropping moments when you realise how far you have to backtrack. So try not to be too gung-ho – unless you have Rico’s chaingun.

As you progress through the game, more team-members join your side. There are no commands to issue and you’ll have to do most of the hard work yourself. But they do add a bit of team atmosphere to events. What is interesting is that you can choose to play as one of them at the start of a chapter.

Jan is your default everyman that you start with. Luger is the stealth-type with a silenced automatic pistol that has a neat secondary fire mode that fires single bullets that hit like sniper rounds. She can also climb ropes and squeeze through small spaces, giving her a few unique routes. Rico is the default loud-mouthed asshole that’s in all three games. He carries an epic chaingun though so we can forgive him. Hakha plays similarly to Jan, but with Helghan weaponry and the skill of being able to pass through laser trip wires unharmed. There’s enough variety in the team to tempt you back for multiple playthroughs.

The multiplayer side of the game is sadly lacking. You can play two-player split-screen arena matches but the online options have disappeared, which is a shame as I recall it being a decent game online even with the PS2’s online capabilities. There are plenty of modes if you do want to play with a friend or bots though.

With no collectables to find in the single player game, most of the replayability will come via Trophy hunting with many of them focussing on weapon based-milestones. Besting the game on Hard is going to be a tough one, especially seeing how many bullets enemies take on Easy and Normal settings. To be honest though, Killzone is so enjoyable you might want to restart for the fun of it.

The Short Version: Killzone’s fantastic weapons tear a meaty hole through modern competition and the multiple playable characters add enough variety to warrant multiple plays. The story puts the team together through impossible odds in one of the best wars seen on PS2 and now on PS3. The Helghast are a stylish and ruthlessly tough enemy that rightly deserve their place in PlayStation’s Hall of Fame. Put simply, one of the best HD-remasters or FPS titles money can buy.