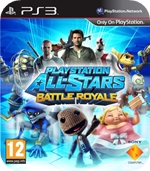 Requested and rumoured for years, we finally have a game putting together a rich collection of the finest PlayStation-exclusive characters along with some top names from third-party brands for a mighty punch-up. The comparisons to Nintendo’s Smash Brothers are obvious, as they always were going to be, but I’m here to review the game on its own merits.

Buying the PS3 game also gives you access to a free download of the Vita version and I’ll go into details about the portable options later on. Let’s get stuck into the game itself on PS3 first.

Fights take place in 2D arenas with multiple platforms to leap around on and traps to avoid or boot your foes into. The action is simple and shouldn’t take newbies or casuals long to pick up. X is jump and the remaining face buttons are all varied attacks. Press an attack button in conjunction with a direction on the d-pad/analogue stick and you’ll get a different move. Not every character has the same controls for certain moves though; launch moves for opponent juggling for example may be different between Kratos and Sackboy. There are blocking and taunt buttons, but in general, it’s a button basher through and through. Special weapon pick-ups like bombs and swords appear occasionally too.

Button bashing alone won’t make you a winner, as it’s all about the kills and you can only kill using a special move. Specials have to be earned by filling a metre with regular moves up to one of three levels. Each character has different specials, with varying ranges or areas of effect, which you’ll have to learn to avoid wasting them. The higher the level, the more effective the special. Save up for a level 3 special and you can expect to bag multiple kills as you gain one hit kill abilities with your opponent’s mobility also hampered in some way. For example, Raiden’s forces everyone into a cardboard box and Big Daddy puts everyone underwater.

There are a few rare weapons that will help you gain kills, such as a Gorgon’s head, but generally, you have to master the specials. This unbalances the game greatly as a player can play appallingly, then get lucky with a special and get the win. I’ve had more wins online from playing like crap, than when I have when kicking ass. Annoyingly, you can’t see the score until the end of the match, which removes any sense of fun or scope on how far behind/ahead you are.

Match types are horrifically thin on the ground too. The main match is a three-minute deathmatch or you can choose between limited lives or a kill target. The only other variation is 2 Vs 2. And that’s your lot. The campaign mode has a brief character-specific animatic bookending some very repetitive fights which will give you cramp up your arms by the time you finish it despite the short length.

There’s a separate challenge mode for single player too that involve responding to command prompts or reaching kill targets with infinite specials and so on. It’s quite handy for testing out each character’s moves though.

Every character can be levelled up to unlock icons and costumes, but you’ll probably stick to a select few, as they’re poorly balanced. Characters with swords rule the game by some distance. In the hands of a newb, Drake from Uncharted is utterly useless when going against the likes of Kratos.

In fairness, many of the characters do have a familiar collection of moves that you’ll enjoy if you’re a previous fan. Kratos, Nariko and Jak especially really look the part and handle just like they would in a 2D version of their own games. Characters like Sackboy have a surprisingly useful skillset (such as dropping an electrified panel as a trap), but ultimately they get destroyed online against blade-wielders.

Stage design is well realised and combine two different IPs to provide an ace nostalgic trip as you try not to get too distracted. The background will often lunge forwards with menace too. Hades will slam you, Carmelita Fox shoots at you and golfers raining down barrages of balls are just some examples of the PlayStation mash-ups you can expect to see.

The Cross-Play elements of the game with the PS Vita were something I was really looking forward too. Sadly, it’s hardly the slick experience I was expecting. First, you can’t use the Vita as an extra controller when playing local multiplayer. This is because the game won’t allow you to sign in on the same account on both machines, unlike the recent When Vikings Attack, which when playing on the PS3 would allow the Vita player to sign in as a plus one. JonhSmith(1), for example.

To use the Vita locally on your PS3 (say you’re short on PS3 pads), you must sign in on a different PSN account. The Vita can only have one, so you’ll need to sign in on a fresh account on your PS3, which is a bit backwards if you want to unlock XP targets.

Even after realising all this, I couldn’t get the cross-play to hook up because of a glitch, which has only just been patched a week ago. But now, I’ve been able to give it a shot and it does work, and being able to use the TV as a monitor for the Vita is much better than looking at the miniscule action on the Vita.

If you have enough controllers to go around, you should avoid all the fucking around with PSN accounts and ignore the Vita. Another issue with the multiplayer is that only player 1 levels up their character. This is ridiculous as there are no gameplay benefits to levelling up; it’s all cosmetic features like costumes and icons.

This also makes the split between ranked matches (get what your given) and unranked (choose modes, time/life limits) a pointless one also as it’s not like you’re gaining an unfair advantage by choosing easy games like you might be able to in an FPS with progressional upgrades. Being able to choose what match types to play would allow the game to stay marginally fresher, instead of waiting to see what you’ll get and being disappointed again and again.

How does the Vita game hold up against the PS3 version? Well, not bad, but when you’re at home you’re unlikely to go portable. It’s pretty much the same experience (well, a few jagged textures on the Vita) on both except for having to press the touchscreen to pick up weapons, which essentially gives your opponents free reign to juggle you into oblivion as soon as you take your hand off the d-pad or face buttons.

The smaller screen doesn’t do the game any favours once the four fighters are spread around and the camera pans out, leaving you squinting for the P1 marker amidst the angry heroes brawling around in a hazy cloud of rage.

For some reason, Trophy progress isn’t shared between the PS3 and Vita, but if you (auto)save your progress while signed into PSN, turn one machine off and sign-in to PSN on the other you’ll find that your unlocks, level ups and challenge checklist are fully synced, which is great for grinding your way through the game. The Trophy issue is a ball-ache for Platinum fans though as they’re forced to stick to one machine. There’s no chance any sane gamer will want to Platinum this twice.

When playing online the game supports a mix of online opponents and local multiplayer and it works better when playing in a party with people on your friends list as you’re booted back to the menus after every fight with strangers. Connecting to matches takes too long, making the trip back to the menus after every fight with random people an utter ball-ache. Many of these problems and others mentioned throughout my review are patchable, but if the developers thought this was good enough to release in the first place, then it’s unlikely they’ll bother.

The Short Version: As an overall package, the game is reasonable value for money, but the clumsy connection options between the PS3 and Vita are very off-putting. The actual fighting is best enjoyed with local multiplayer and can be quite fun before the cramp sets in. The stupid points system that only rewards you points via Specials breaks the game though and is a poor choice on the developer’s part. Patch in some regular health-bar options for an extra mode and we might be back for more.