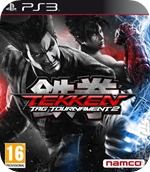 Accessibility and new fans. That’s what Namco would have you believe are the targets that Tekken Tag Tournament 2 is aiming for as one of the most respected names in the fighter genre returns. Getting new players used to the basics of the series has always been an obstacle many fighting games so anything that seeks to address this is going to be well worth a look.

The Fight Lab is Namco’s attempt to ease-in new players and get them used to Tekken’s basics. Basics that to outsiders make the game immensely difficult to pick up and play with the same level of success as the Street Fighter or Soul Calibur titles. Button bashing in Tekken games will generally get you nowhere, thus making it less enjoyable to crack out at parties for anyone that hasn’t played them before.

In the Fight Lab, you control the Combot -a vanilla-flavoured robot- to learn the basics over multiple stages and tests. Aerial combos, or juggling, are explained along with instructions on which moves initiate them. The bound move from Tekken 6 is also extensively detailed allowing players to bounce juggled opponents off the floor for further punishment. Combine these moves with tagging partners in and it requires a chain of fiddly button presses. 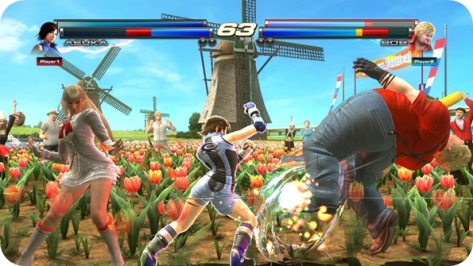 It’s strange to see this mode give you very little defensive help. Sure, there are sections dedicated to blocking. But essential tactics like getting up quickly, rolling away and rising attacks are ignored. The only help I could find for these were on scrolling text segments on the loading screens. Seeing as the AI and any online players will kick the hell out of you relentlessly while you’re on your back this is an alarming omission.

There’s a story element as a background to the training, but it’s determinedly awful. Awful and annoying. It’s like going on holiday with that terrible Tekken: Blood Vengeance CGI movie, but with hand-drawn animations and talking heads. The story is undeniably the least important part of any fighting game, but if you’re going to shoehorn one in, you could at least attempt to make it palatable for newcomers.

The Fight Lab would be more useful if it wasn’t doomed from the start. All it really does is tell you how to play Tekken with one character, the Combot. New players who dive into the Arcade mode afterwards and pick a few characters will be saddened to see that juggle starter moves and bound attacks are not mapped to the same controls for each character. As you progress, you earn points that you can buy other character’s moves for the Combot, which is a neat touch, but you’ll still need to learn an extra fighter’s move set because the whole game is based around a tag-team setup.

For the regular Tekken player though, there’s a lot to shout about. With over fifty characters on the roster, there’s no shortage of variety on offer. Stages are well designed and look considerably better than the fighters who seem to be lacking a final level of polish and are merely ‘quite nice.’ The levels feature balconies and destructible floors and walls, but as I made my way through the Arcade mode a few times I realised that not enough stages feature these destructible environments and they don’t really come into play as often as you’d wish.

As far as the fighting goes, not much has changed. Sure, the tagging is marginally faster than the first Tag title and the fighters have a few extra moves to add to their already bulging move set, but the combat feels overly familiar. Compared to other fighters, Tekken feels stiff and unresponsive. The addition of the Fight Lab is all well and good, but it you weren’t a fan of the original Tag game 12 years ago, you’ll find that you probably still aren’t. A shame really, especially given the upcoming release of Tekken X Street Fighter.

The Arcade mode feels very bare bones. Unfortunately, all your opponents seem to have raided the fancy dress shop and are all dressed fairly horrifically. Rather than face-off against classic looking opponents, you’ll be pummelling garishly dressed tourists. It feels like a series that has lost its visual identity a little, which makes the Arcade experience disappointing. Naturally, it all culminates in another cheaty final boss that hugely outbalances the difficulty of the matches leading up to the finale. It doesn’t help that there isn’t a quick rematch option either as you’re sent to the character select screen every time you’re defeated.

Other single player elements include ghost matches, exhibitions, survival and training. When you look at the extra content and challenges provided by series’ like Soul Calibur, Mortal Kombat and even Virtua Fighter, it feels very lacking. What’s the point of having fifty characters when there’s nothing to do with them? We don’t count being able to play dress-up as a long-term thing.

Multiplayer fans are better catered for though, and to be fair, fighting gaes are only really ever worth the investment if you’ve got a long friends list to go with them. Four players can get stuck into tag matches and you can even set up tournaments for large groups of players, handy if you’re getting mates round for a fight night. The game uses an online pass, just in case you were thinking of renting or picking it up second-hand. The new World Tekken Federation is the game’s answer toCOD’s Elite or Bungie.net. Instead of the usual win/loss stats that are readily available in other fighters, this free service actually givers you useful feedback such as how many time you get thrown per match or how much damage you take from being juggled.

You can pinpoint your areas of weakness and try to fix them. The cynical amongst you are probably already aware that juggle damage is a weakness and being told so will only enrage you even more. The matches are lag free though and the way that the new services encourage you to build teams could help to create a decent online community. It’s just a shame that it’ll be the same old crowd, as Tekken’s doors still seem to be closed to outsiders.

The Short Version: While Namco have made an effort to pull in new players with the Fight Lab, it lacks weight thanks to only preparing you to use one fighter. The lack of defensive coaching is annoying and the constant vulnerability to juggling is as off-putting as ever. The lack of extra modes in single-player means this is only really worth a purchase for existing fans, especially those keen for multiplayer scrapping.