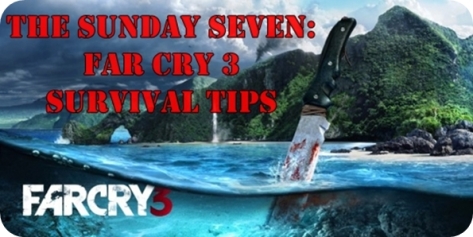 Far Cry 3 is a hot contender for Game of the Year and should be on any FPS fan’s Christmas list. The postcard-perfect tropical location is fraught with danger though so you’ll want to take note of our handy survival guide before you pack those grenades, assault rifles and sun cream. These seven tips will make your life much easier and allow you to enjoy the game to its maximum potential. Feel free to add in your own tips in the comments section or anything cool you may have come across in the game. 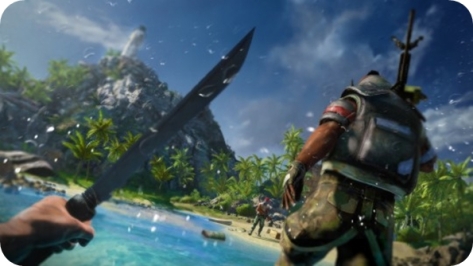 1: Upgrade Your Skills For Stealthy Kills

While Dishonored allows you to pawn much off the hard work onto possessing rats, piranhas and such, Far Cry 3 is all about making you a stealthy jungle-sneaking master of death. Upgrades eventually (but at an acceptable rate) allow you to move quicker when crouching and even chain together multiple takedowns as you clear out pirate bases with eerie militant and remorseless precision.

Pressing up on the d-pad brings up your scouting binoculars to tag any enemies or animals so you can keep sight of them, even when they move out of your field of view. The only issue is it’s not always clear when you’re lining up a shot if they’re out of cover or not thank to the always-translucent display.

Hunting animals for their hides is a vital part of surviving in Far Cry 3. At the start of the game, you can barely carry any money or ammo, making life very difficult as the two make the world go round. Check your crafting menu for lists of what hides you need for items like bigger wallets or extra ammo pouches. Animals can be found at marked locations on the map, but that doesn’t mean they’ll exclusively turn up there. Their behaviour and territory patterns often change dynamically, so be aware.

Don’t try and take down a tiger before you’ve got a few upgrades under your belt though as they’ll take more than a full clip to the face with your first assault rifle and they’ll eat you before you get chance to reload.

The game will auto-save after missions and challenges, but not after crafting gear, hunting for skins or collecting plants. So make sure you save the game manually from the pause menu. A quick task that saves you a lot of time. Don’t go through the trauma of killing a difficult tiger only to accidentally fall off a cliff or turn round and walk straight into an angry bear’s mouth and lose everything you picked up since your last mission.

For every tower you scale and reactivate you’re granted a free weapon at the store and the smog is removed from your map, meaning you can see the lay of the land for that area, giving you details for wildlife locations and all the roads.

Clearing out the pirates at the bases dotted around the islands not only gives you access to a shop at every one, it also unlocks extra hunting and assassination side-missions that give you XP, cash and special animal hides for top-end gear. The most useful feature of a base though is an additional fast-travel waypoint, meaning you won’t have to drive as much when a new mission pops up on the other side of the huge mag.

5: Level up in Co-op before Attacking Multiplayer

It’s always intimidating going into a competitive FPS match without any upgrades and the default weapon, so the fact that XP and upgrades co-exist between multiplayer and co-op is fantastic news.

Playing the dedicated co-op chapters online is great fun and the XP comes thick and fast as you take on the AI during lengthy stages. Rather than plonking you in an arena-like bowl and throwing endless waves at you, the game features A-B stages but with plenty of open spaces separating the corridors allowing you to spread out for maximum coverage. If you get taken out, you’re given a very generous time limit for your buds to come and revive you. If you’re pinned down by a heavily armoured gunner, get your med-pack wielding friend to lead him around a corner so they have time to revive you without being ripped to pieces.

Don’t just hammer your way through the story missions. Take some time to explore the huge world of Far Cry 3. Pick a direction and just go. Chances are you’ll find ancient tombs, hand-gliding spots, caves with treasure, letters from Japanese WWII soldiers, online leaderboard challenge events and more. The graphics are at such a high standard, it makes the world feel so vibrant and lived in that even getting around on foot feel ok.

Nature wants to eat your face, probably because it knows you want to make a wallet out of its ass. Make sure to use your binoculars to tag any nearby creatures when you’re scouting an enemy base or a specific animal to hunt. Don’t expect veg-munching animals to play nice either. After saving a bison from a tiger, I was surprised to find myself suddenly getting trampled by it while trying to skin the tiger. Nature is not grateful.

Don’t forget to rely on your ears when travelling through the jungle. Dangerous animals like tigers, bears and dogs will often growl aggressively when they’ve spotted you. You can hear most of them making softer noises when just wandering around too, so be careful not to spook them. However, nothing adds a bit of spice to base invasion like running in with a tiger chasing you. If you spot any lily leaves in the water, it’s pretty much guaranteed there’s a crocodile lurking in them, so do take care when swimming across a river.

It’s not just the animals that you need to be wary of. The island is full of cliffs and steep drops so care must be taken when climbing downwards as even relatively small drops can chop some serious real estate from your health bar. Players of Far Cry 2 will remember that fire can be utterly devastating too. Flames from grenades, explosive barrels and molotovs will spread alarmingly fast, especially through the grass meaning it can trap you if you’re not careful. Just for fun though, try crashing a jeep on a cliff and jump out at the last second to see it burn an entire side of a mountain.