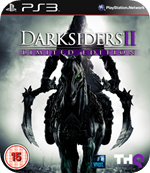 After the first game where War -one of the Four Horseman- jumped the gun a little and brought on the apocalypse and wiped out humanity, we get to step into another rider’s shoes. Running parallel to the events of the original game, we’re now playing as Death.

Death is eager to clear his brother’s name and if possible, restore humanity to Earth. For the most part of the game though, we won’t be going back to Earth. Instead we’re exploring several large open maps of typical fantasy fare – forests, canyons, ice worlds, hell and any other staple you could care to remember.

While it’s great not to be running around another grey variation on New York or some other American city, there’s no denying that the graphics in Darksiders II haven’t really moved on from the original. NPCs are stiff and combined with the lip-syncing it makes every character talk like a nutcracker doll. From a distance, environments look impressive thanks to the epic scale of some monuments, but when you get close to anything, textures are blurry and edges jagged and crude. It’s not the sign of this generation’s hardware running out of steam (as one review I read claimed) it’s just a lack of effort. 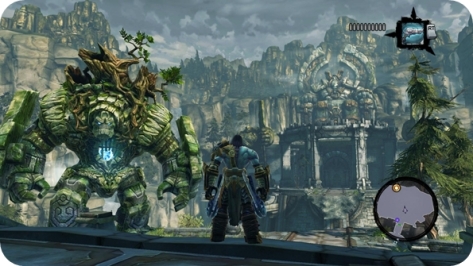 Smoother combat is one of the key areas that Darksiders II does improve over the first game though. Primary attacks use a pair of double scythes, while secondary beatings involve hammers and axes (slow but powerful) and wrist-mounted blades and gauntlets (fast, but weak).

There aren’t many combos available and extra ones cost a small fortune, which is somewhat off-putting. The combat’s depth lies in the weapons themselves though. Random items of loot are dropped by enemies or found in chests. Weapons and armour are stacked with stats indicating strength, defence, elemental damage, piercing, health attributes and more. Thanks to a neat design idea you don’t even have to go into the menus to check them when you first find them, as a pop-up window gives you the vitals with green/red numbers to help you out. Hold Select to equip or press Circle to bag it. Simple. 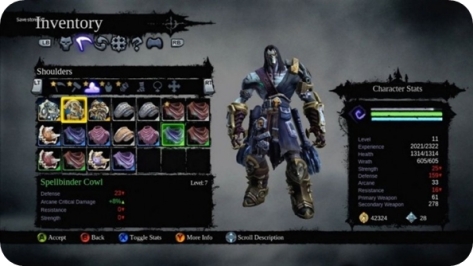 Storing unwanted items comes in handy when you pick up a rare Possessed Weapon. These blades can be fed any unwanted items to level them up and boost their numbers. Sometimes they’ll gain new properties too, although the specific attributes of items (fire damage for example) you feed them doesn’t seem to factor into it at all. I thought the Possessed weapons would play a much bigger part, but I found that even fully levelled-up ones were often not as good as regular ones found earlier. I was only given about five during the whole game and didn’t finish with any of them equipped. Maybe including Possessed armour items too would have a good idea?

Skill points are rewarded when you level up. These can be used to buy new abilities and skills to be mapped to the face buttons with L1 acting as a modifier. These skills sit on two skill trees, Harbinger and Necromancer with players free to stick Death’s toes in both. Go for strength boosts, Grim Reaper strikes, teleport slashes or call in a murder of crows to attack enemies or just swirl around you in badass fashion.

When you have a decent selection of moves unlocked, combat is generally a lot of high-paced fun. Juggling enemies into the air, leaping and slicing them up before smashing them downwards with a powerful axe strike and making your way to your next opponent like a whirlwind of knives can be a real rush when it all clicks. Fighting in corridors isn’t fun though, so the final stages can be frustrating even with the otherwise useful lock-on button. There’s quite a sudden difficulty spike too, with some enemies providing a tougher challenge than the boss fights. 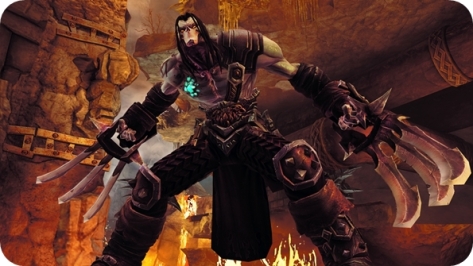 Some of the bosses in the original game were really annoying, for the most part here they’re simply too dull. Dodging slam moves and rushing back in is the go to strategy apart from a couple of fights. One fight has you taking down a colossus by (shock/horror) shooting glowing parts before running in to stab. Another made some decent use of portals to get an enemy to attack himself, which was much better than the rest. There are more bosses to find if you go on a side-mission binge, but you’ll have to explore around to find them in the world map. Note: don’t try taking on the fire-breathing giant bird at a lowly Level 9. It doesn’t end well.

Other items used in combat include a pistol that’s only handy for taking out tiny enemies or firing off at a boss in a strafing pattern while you grow the stones to get stuck in there with the serious weapons. More useful is the hook that lets you pull enemies towards you as well as helping you climb around certain areas.

One section of the game turns into a shooter as Death marches through ruins with a laser-like chaingun and a grenade launcher, fending off mobs of demons. Undeniably fun at first, but the section dragged on a little too long in the end. 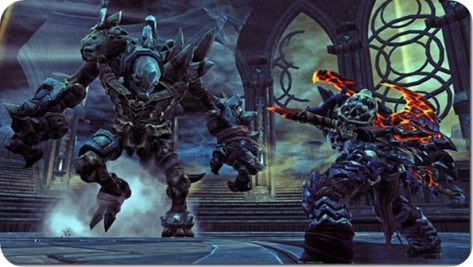 The platforming side of the game is like a lighter version of Prince of Persia. Death wall-runs and climbs ledges with great speed, but a few technical shortcomings gripe, such as a wall-run failing to activate or lazy level design putting impassable chest-high barriers in your way despite Death being more than capable of climbing over such obstacles.

It was a little disappointing to see the game go back to using Portal-esque puzzles towards the end as that knackered the pacing of the original. While not too difficult, combining them with Death’s Soul Splitter technique, where he splits into two forms to handle multiple levers and such seemed like a bit much after most of the game just has you on the attack having fun.

At around 20 hours for the main campaign Darksiders II is just about the right length. Dull final stages let the experience down though and anyone eager for some story progression in terms of the first game will leave sorely disappointed as the original’s existence is barely acknowledged. On the other hand, players new to the series won’t feel left out at all. 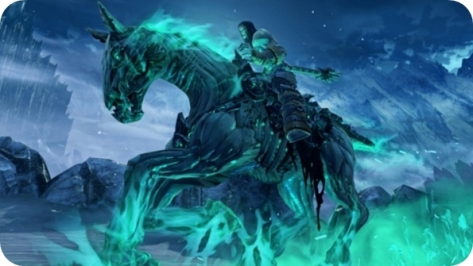 Darksiders II only slightly improves on the decent original. However, the combat is much more fun and the random loot does encourage you to raid every chest and smite every enemy. Sadly, there’s a lack of polish to the graphics and the story fails to engage throughout, which is a real shame given the hand-rubbingly good final scene of the first game. It’s unlikely we’ll see Darksiders III until the next-generation of consoles, maybe it’s time Vigil Games got the four horseman together in one game like we’ve always wanted, especially if we can play it in co-op.