Frogwares have been providing Sherlock Holmes titles for years now on the PC with only Sherlock Holmes Vs. Jack the Ripper making its way to a console. But keyboard-loathing point and click adventure fans will be pleased to hear that the latest case to crack will be tri-platform, coming to PS3, Xbox 360 and PC. The developers and publishers are keen to expand the Sherlock Holmes brand and bringing their games out on all three platforms, specifically the consoles, is key to that goal.

Influenced by the movies from the 60s rather than the ridiculous Guy Ritchie eyesores, the experience will be a traditional one, instead of something that’ll have Arthur Conan Doyle spinning in his grave. For the first time in the series, we’ll be seeing a very dark side of Sherlock Holmes. The trailer even goes as far as to make him look like a murderer so we’re intrigued to see how events will play out. During the course of the game, we’ll be playing as both Holmes and Watson. Our money’s on Holmes being a bit murdery on the side. Look at his evil face! He totally did it. 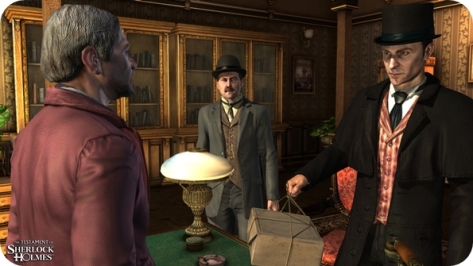 The control format will be the familiar point and click style on the PC, but the console experience has been specifically designed to allow full analogue movement control in both regular and first-person viewpoints. This will remove that stiff feeling that these games often provide on consoles. The camera will also be controllable, showing off the fully 3D environments.

Click here to read the rest of my preview at Dealspwn.com