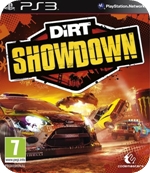 This is not a traditional rally game. It’s an important point to remember for fans of Codemaster’s epic Dirt series. What it is though, is fun. Car smashing, exhilaratingly arcadey fun.

While Dirt 3 seemed caught in two minds as to whether to carry on with the impeccable rallying from the near-perfect Dirt 2 or try and turn your car into a demented pole-dancing skateboard, Showdown feels much more focused, admittedly more towards a Mad Max meets X-games mashup.

Gone are A-B timed stages in favour of a full on festival of car on car violence and general, well, pissing about. Think back to games like Destruction Derby and Twisted Metal, but pretend they were never crap.

The handling model has been toned down rather than dumbed down. Cars still drift around corners with an almost obscenely pleasurable grace and only mild taps of the handbrake are needed for the tightest of hairpins. For many races you barely need the brakes at all, just taking your foot off the gas is enough to line up those corners. This would feel too light and simple for a regular Dirt game and serious A-B events, but for what lies ahead in Showdown, it’s just right. A turbo button has also made its way onto the pad and I’m loving the complete pad setup customisation too.

Diving straight into the Showdown Tour I found lots of various game modes to smash through. The racing events take place on regular circuits and insanely interwoven tracks. Regular racing, Eliminator and Domination modes return with Eliminator now leaving defeated cars on the track as neat dynamic obstacles. There are lots of barrels and tyre piles in the middle of the track that pleasingly erupt on impact without really slowing you down too. They’re asking for it really.

AI opponents act in a hive mind with one leader constantly on your tail and he’s quickly replaced if you shunt him into a wall. Yes, rubber-banding AI can be annoying, but it works both ways and ensures some seriously tense racing.

8-Ball events feature track section that cross over each other, sometimes at ground level and later in mid-air. An initially annoying mode that gets stronger as the track design gets more dangerous. The car’s health is limited which means you can only afford to get taken out with a sickening T-bone smash in mid air a couple of times. As you tear across junctions you’ll catch terrifying glimpses from the corner of your eye as you narrowly miss the chasing pack. One fantastic moment involved recovering from a spin-out with two corners to go. Just as I got going again and was about to be overtaken (aka properly fucked over) a lagging car flew across the intersection and ripped apart my opponent like a giant rusting redneck hawk, leaving me free to take the chequered flag. 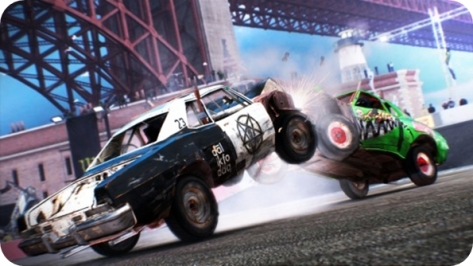 Other modes consist of performing stunts or violent carmageddon. Dirt 3 players will be familiar with the requests for tricks like donuts, drifting, smashing boxes and getting air. Thankfully, the vehicles are much more responsive this time around making these events fun rather than an irksome chore. Head 2 Head is a dual where you compete to get to the finish while performing specific stunts on the way, while Trick Rush asks you to ramp up as many points as possible in a set time.

Smash Hunter is an evolution of a mode from Dirt 2, placing you in a compound and getting you to smash a row of specifically coloured boxes before being told the next colour to aim for. It’s a lot of fun to play and once you start to know the route you can start to drive more bravely and experiment with boosting for a better time.

The more violent modes include Knock Out, where cars compete to push each other off a raised platform for points. Naturally it’s hard work not following them straight off, thankfully everyone can use ramps to get stuck back in. It’s a fun mode, but it doesn’t reward you for pushing out multiple cars at once which leaves you feeling a bit cheated.

Rampage will be familiar to fans of car combat games and I’m glad to say we can put this one in the very sparse ‘good’ category for the genre. No weapons or powerups are available, it’s all about hitting stuff hard and fast. All vehicles have a health bar so you can make a suicidal bee-line for those near-death ones you see limping around the edge of the arena. On many a cruel occasion you’ll just miss and smash into a wall, leaving you frantically trying to get out of the way before you get cornered like fresh meat in the prison showers. Major points are rewarded for ‘kills’ but you can rack them up for damage too. I had a few issues with some impacts not registering properly, as indicated by depleting tiny amounts of health for major impacts when other times they’d be more satisfying. That was nowhere near as annoying as the AI putting a finishing nudge to a car I’d been battering relentlessly. The kill-stealing shits. At least they make you work for a win though. The final mode is Hard Target which is a survival mode as you try and stay in one piece for as long as possible in an arena full of angry cars.

Most events take place in arenas or tightly packed circuits, meaning that aren’t as many lush visuals to take in as before when you’d tear through global picturesque countryside. However, there are some visual treats, such as the booming blossoms of fireworks over Baja, the heavy rain in night-time Michigan and the fierce snowstorms of Colorado.

You’d be right in thinking that some of those names sound familiar. Showdown reuses quite a few tracks from past games which feels very lazy considering the game isn’t locked into a license like the F1 titles.

Fans of licensed vehicles may feel a little short changed too as for the most part you’ll be driving around non-descript bangers. It would seem that manufacturers are happy for you to smash their digital cars into trees and over the sides of mountains, but the idea of them scrapping it out like rutting beasts in an arena just isn’t happening. Personally, I think if you’re going to let Ken Block whore your car around a pole you should get off your high horse.

You can finish the tour over a weekend with ease, leaving you the multiplayer side of the game and the irresponsibly named Joyride mode, better than Drink Driving Prick Mode I guess. Here you get to drive around Battersea Compound and Yokohama Docks, trying to find hidden icons amongst all the grey. Using a car to get some of icons is damn annoying though. Imagine if playing Saints Row or GTA and you were grabbing the hidden packages and you spot one down a narrow alley, but then you’re told you can’t get out of the car. Yeah, it’s not great. There’s also a checklist of area-specific stunts to perform which is much more fun, plus you won’t get a bollocking off the police like you would in your local supermarket car park. Well, not until the DLC maybe.

The presentation for the game carries on in the vein of Dirt’s recent festival and stickers atmosphere, which is becoming less grating as I just lean back and take it. The race commentator needs to be found and destroyed though. For some reason ‘you’ never get a victory as he always refers to you as ‘they’.

The Short Version: This is a hell of a lot more fun than I was expecting it to be, although I’ll be keen to ensure Codies keep their promise of going back to proper rallying next time around. There’s a healthy mix of racing, stunt driving and violent smash-fests to keep you entertained for a decent weekend. The lazy recycling of some of older games’ material lets it down though. In reality, if you’re going to pick this up for full price you’ll be someone eager to play it more for multiplayer fun.