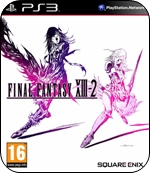 The beautiful and the damned

If you didn’t finish Final Fantasy XIII, you’ll have saved hours of your life from a torturous grind. However, the story was one of the best the series has ever done. The brooding star, Lightning, was a fantastic character that proved you can have a female lead that eschews the tiresome ‘big boobs, brassy attitude’ design and we were gifted an understated portrayal of conflicted charisma. A real boot up the backside of the series’ recent rosters if ever there was one.

After the closing scenes of the last game, Lightning disappeared almost as soon as she was reunited with her younger sister, Serah. This leaves the sequel without its leading lady. I wasn’t convinced that Serah had what it takes to take over the lead, but Square-Enix have done a great job at building her into a solid character. They must have been really confident in her as the old cast only really appear as cameos, admittedly perfectly timed ones. 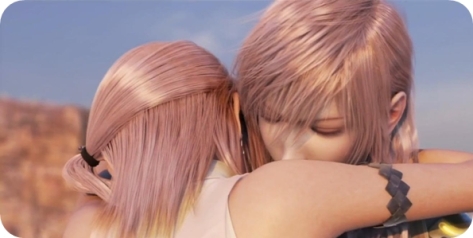 Beautiful character models help draw you in and will have you riveted to your TV. Far from just a bunch of pretty faces, the emotions running through them are touchingly real. Everything from Lightning’s subtle half-hidden smile, to Serah’s utter despair at having her sister snatched away from her all feel genuine, allowing you to really invest in the cast.

The story involves Serah and new guy time-traveller, Noel, using the Historia Crux to traverse the world of Pulse throughout various stages in time after the fall of Cocoon. What begins as a quest to find Lightning -who nobody but Serah remembers even being there at the end of the last game- turns into something much bigger. Don’t worry, the story’s so much better the last fumble of a sequel the series did, FFX-2.

The structure of the game is thankfully much more open than FFXIII’s A-B corridors and you often have a choice of which location to visit next. Revisiting locations at different points in time is the main feature of XIII-2. Yes, this does mean quite a lot of recycled scenery, as even 100 years often has little impact. On a few occasions though, I was genuinely surprised and awestruck at the differences. Adding snowfall to one stage looked great, as even the characters got a realistic dusting. Revisiting a previously night-only futuristic metropolis during the day had me gawping around for ages, just turning the camera round and taking it all in. 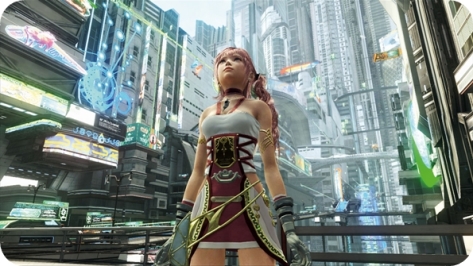 Stages are no longer strictly glass corridors and there are hidden areas to explore aplenty and side-missions make a welcome return. Fulfilling extra tasks usually reward you with fragments that have data logs in them. Many of them just describe an area, but there are some great ones, particularly the emotional messages from Fang and Vanille.

Gates that lead to different locations and times must be opened, either with Artefacts given to you during the course of events or with Wild Artefacts that you discover on your own. Herein lies a problem though; the Wild ones can be used to open gates that might not be relevant to pushing the story forward and they are bastard-hard to find, meaning you may find a gate that you have to open to get the plot going again, but no, you’ve spunked them all on irrelevant gates. Don’t expect the game to give you any decent hints about where the next gate is or where to find extra artefacts either. Better get ready for that shameful feeling of consulting the internet. Still, it’s a better experience than XIII.

So, let’s see if the monotonous combat has been improved too.  It is better than XIII, but sadly still not on a par with the old days. Rather than a much-needed overhaul, it’s been tweaked to be, well, less annoying. Better, yes. But still a long way from the heights of the PS1 games. 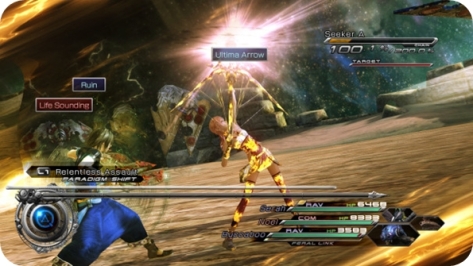 First up, it’s no longer a case of Game Over if your party leader dies. Opponents are easier to get into Stagger mode (newbie hint: a shield-like energy bar must be broken down first to inflict serious damage), making battles much shorter. Boss fights can still drag on (I may have cried during the last one), but smaller skirmishes on your travels or when grinding for XP sometimes only last a few seconds if your team is beefed up enough. For some stages you can’t go more than 10 feet without getting sucked into a fight which will really tick you off if you don’t need the XP.

Sadly, the issue of just hitting X for hours on end is still a massive problem for the system. Boss battles aside, the combat could not be duller. Press X for the auto-commands and the best choices from the currently selected Paradigm (character classes can still be changed on the fly) will be dished out. Yes, you can enter commands manually, but this is much slower and because the battles are ‘active’, opponents won’t wait their turn and will attack at will. With the action being so meticulously mechanical the game could at least let the battles play out completely automatically as I’ve spent hours just tapping X waiting for the ATB gauge. Nothing happens until it’s full, but I couldn’t help but impatiently tap away just for some feeling of being involved. 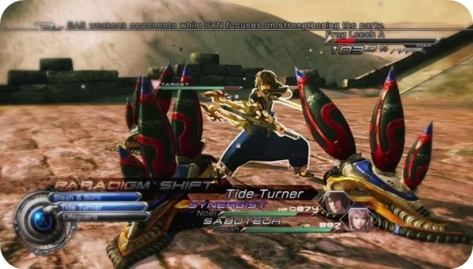 Quick Time Events or ‘Cinematic Actions’ have been added for the first time and from the demo I thought these would be used often in boss fights to chew through the Stagger metre. While they look flashy and add some ace cinematic sequences to fights, they really don’t turn up often enough. Another new feature to the combat is being able to use some of the monsters you’ve defeated as party members alongside Noel and Serah. They come in all classes and can be levelled up, although they feel weedy compared to the main cast and there’s always the feeling of something better might be around the corner, putting you off spending on any of them.

Like the combat, levelling up is also very linear. You can choose which class to focus on, but skills must be unlocked in a set order, giving you crap you don’t want to get to the skills you do. It would be useful if the game would at least level up your health/strength/magic automatically as it’s a slow process dipping back into the menus. 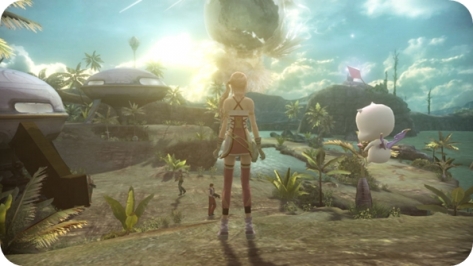 Shops and item crates now feature proper weapons rather than XIII’s ridiculously vague modding system.  Hidden items can be found using your Moogle character too. Yes, the Moogles are something of a Final Fantasy icon and many fans blasted their absence in the last game, but with me not being an eight year old girl, I can’t say I missed the little freaks. Ending every sentence with ‘Kupo’, is not cute or endearing, it’s annoying. The Moogle can be thrown to pick up far away items, but unfortunately there’s no option to rip its wings off before booting it into the nearest abyss.

It’s telling how good the story is that I couldn’t put the game down for 30+ hours. Multiple endings are a surprising feature and perhaps inappropriate considering the exasperating experience of actually playing the game. Which is a real shame as the environments are the sort of next-gen visions that I’ve always wanted from the series and are what the Final Fantasy brand should be smashing the competition with. And look at Noel, how the hell have they managed to make that generic Japanese RPG clone-a-tron interesting? Well, they’ve done it. Stupid name though. 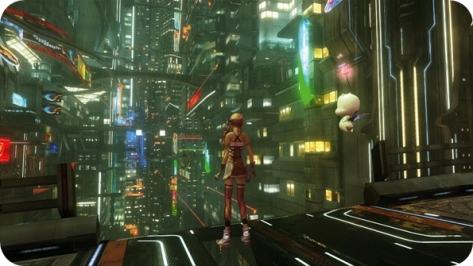 Sadly, despite being at the mercy of the games visuals and plot, there’s no denying the game plays poorly. Yes, improvements have been made over the linear predecessor, but the lifeless combat and skill levelling make the game feel like a great film with the same terrible adverts breaking in every few minutes. If Square-Enix can rejuvenate the action next time, they clearly have the skills elsewhere to create an absolute classic. Sadly this generation’s hardware is still waiting.

Presentation: 95% One of the best-looking titles you’ll see on this generation’s consoles. Beautiful characters and enchanting landscapes are abundant.

Gameplay: 39% Better than FFXIII, but still a real bore on the battlefield thanks to never letting the player get properly involved.

Single Player: 67% Being able to freely explore the game feels like a great improvement, although the stipulations for unlocking some areas of the timeline are woefully vague. The story will reward those dedicated enough to see it through though.

Performance: 85% Never drops a frame throughout and the cutscenes are so intense they should make your console roar with effort. Slightly long loading screens from the Historia Crux let it down a little.

The game leaves me in a strange place. I was constantly engaged with the characters and story and found the visuals for Pulse’s world and its inhabitants to be amongst the very finest gaming has to offer. Sadly, playing the game quickly became boring with uninvolving combat, repetitive missions, a vague sense of direction and a platforming section towards the end that seemed created solely to punish anyone wanting to see the end. It’s a game you’ll want to love, but it just won’t let you.

*I originally wrote and published this review for NewGameNetwork.com