Well that didn’t take long. On the same day PlayStation Move arrives and impresses with a mighty 9/10 score for Sports Champions, we get our first stinker for the motion control device.

The concept is sound for a game idea, if not a little barmy. You slide down busy Hong Kong-esque streets on an office chair, baby seat or some other inappropriate device, aiming to get to the escape van at the bottom of the hill, while collecting cash and points along the way by kicking Yakuza thugs and performing tricks. If you can remember Tony Hawk’s Downhill Jam, you’re in the right ball park.

The game is controlled with one motion controller for everything. Sports Champions showed that there is nothing wrong with the device, but it’s been poorly utilised here. Tilting steers, forward shaking accelerates, a sharp forward stab gives you a turbo boost and a vertical lift will make you jump. It’s a shame that for the most part these controls are really unresponsive resulting in crashes into scenery, vehicles or the Yakuza. 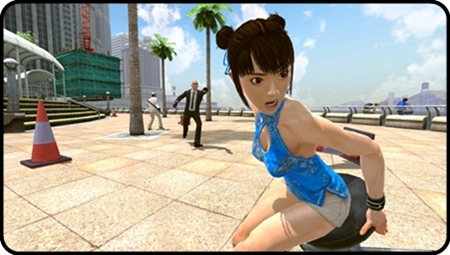 There are some other controls to help you take on the Yakuza and other obstacles, but they suffer from similar sleepy response times. The trigger allows you to lean backwards, the Move button produces a spinning kick, Square or Triangle combined with a sideways swipe kicks in a specific direction, while X and Circle are used for sidestepping. When you jump you can grind on railings to keep a chain of moves going, but there’s not really much incentive to take the risk. Fall off five times while tricking or taking another beating from the Yakuza pricks with sticks and you’ll have to restart the level. The levels aren’t particularly long but you won’t want to play any again.

Kung Fu Rider is not only short, it shamelessly recycles sections of other levels meaning you’ll be repeating the same sections over and over again. You need a D rating to progress, which isn’t too difficult, but you won’t feel the compulsive desire to retry every level to get a clean sweep of S ranks.

The worst levels are the free roaming ones where you have to collect 20 Medals with no time limit and infinite health. You have to get all 20 to finish and the game doesn’t even tell you what to do when you do (quit to the mission select screen by the way), it’s almost like the developers thought, this part of the game would be the final straw for anyone playing it, so why bother finishing it properly. The game’s awful steering and almost impossible movement at slow-speeds make this part of the game a nightmare, especially when you need to turn around. The game was clearly designed for you to only go downhill, which really grates when you have to do these free roaming levels where you need to backtrack uphill at a snail’s pace.

There’s got to be something good right? Well the graphics are fairly decent, even if the environments are a bit samey. I’d be telling a lie if I didn’t say the way your rider’s body wraps around a lamp post or slides along the tarmac on their face after a big collision didn’t raise a few sly smiles around the house.

If the game had supported DualShock play then this may have fared better. Even the new navigation controller would have been a welcome addition to take over steering duties and I don’t see any reason it can’t be patched in at some point.

Well, that’s the positives out of the way. The multiplayer is a bit of a con, as a second controller allows an extra player to move a hand around the screen grabbing money for you. They can also grab objects like cones to throw at the Yakuza, but more often than not, it’ll take you out as well. Not even having a turn-based match setup for the best scores is just lazy really.

All that really changes throughout the course of the game is the amount of Yakuza and traffic thrown at you, it gets ridiculous by the end. Not only that, the game seems to start falling apart as the physics rulebook seems to constantly change as usually safe bumps turn into nasty crashes. The different chairs you unlock all have various stats for speed, acceleration and steering but they all feel the same. By the end of the game the wheels seemed to come off all of them as simple acceleration requests were generally ignored by the PS3, meaning the game really limped over the final finish line a few short hours later.

This never really feels like a proper release, more like a PSN title that I’d probably still have given a good kicking at £7.99. The controls are too broken and the gameplay is too repetitive and boring to make this worth a look. Still curious? Check out the demo on the PSN Store.