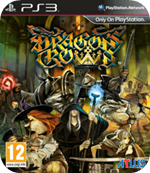 Dragon’s Crown is a fond throwback to classic side-scrolling beat ‘em ups like Streets of Rage, or more specifically, Golden Axe (you can totally ride dragons!). Stages involve going from left to right with a four-strong group consisting of knights, amazons, dwarves, elves, wizards or sorceresses. There’s a boss with a health bar as wide as your TV at the end of each one too, with one of them being a clever nod to a certain Monty Python film. Sold yet?

You’re spoilt for choice, with six different character types to choose from. They’re ranked from beginner to expert, but to be honest you’ll be fine going with whichever takes your fancy from the start and you’re allowed to have a few on the go at once.

There’s been quite a bit of mild outcry (let’s face it, it hasn’t really been an uproar) over the female character design. And we can see why, those boobs are ridiculous and every time we see a female character in a story scene, they seem to be either borderline naked or lying in a ridiculously suggestive position. 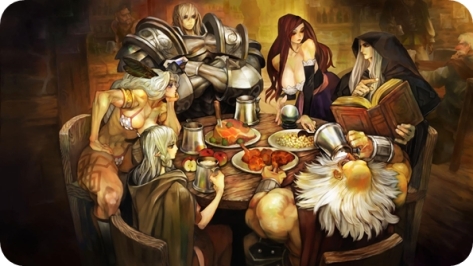 Call it homage to classic art styles, call it immature character artists or call it pandering to a predominantly male audience. It’s blatantly a case of all of the above. But does it deter from the gameplay? No. It’s frequently so over the top it becomes quite amusing in a ‘what were they thinking’ or ‘why does that mermaid have a bum?’ sort of way. You’ll have seen worse in most pop music videos to be honest too. If anything, the muscular dwarve’s shorts concern us the most anyway.

Speaking of the characters, let’s have a look at how they handle on the battlefield. Most attacks use the square button for melee fighters or the circle button for magic types, with everyone able to jump around and dodge attacks too. Different directional inputs with attacks often provide unique results too. It’s a simple system to grasp for core and casual alike, with new features added at a steady pace.

The warrior, amazon and dwarf all have a melee-focused style. The main differences being the Warrior can block with his shield, the dwarf can throw small enemies or large rocks and the amazon has a more acrobatic style. These characters can have their weapons knocked from their hands when they take a big hit though, and are unable to pick them up for about 10 seconds. So unnecessary.

Elsewhere there’s the wizard and the sorceress, both heavily magic-based. They can equip staffs with fire, lightning or ice abilities. The mana meter powers the spells and must be recharged by holding square or using light melee attacks. The wizard can overcharge his attacks while the sorceress has great manoeuvrability in the air thanks to her broomstick. And somewhere in the middle, we have the female elf who has kick-focused melee moves, a bow for ranged attacks and she can even unlock a few spells later on.

The unique skills each character can unlock keep things feeling fresh and I found myself playing for ages with all of them. The battlefield can appear to a bit chaotic at times though, as the camera is quite close and the screen can become awash with enemies getting juggled through the air by upwards sword swings, a hail of arrows and a hurricane followed by a fiery landing,  with only the coloured damage numbers indicating who’s doing what. A mess, but a glorious one.

There’s a tasty RPG flavour to the game too, meaning you won’t be racing through the whole thing in an hour. For me, it’s all about the compelling prospect of new, shinier loot. Lots of new armour and weapons can be collected at the end of each stage, although there’s a twist. You must pay to get it appraised before you can see its full stats. You can see the level rating (what level you need to be to use it) and letter ranking (S-E) but the other information (weapon damage, armour rating, stat boosts etc) are hidden.

So there’s a bit of gamble as to whether an item will be any good, but the game’s eager to throw money at you. The gamble actually makes acquiring loot much more interesting, especially when played in local co-op. By the way, buying your girlfriend new boots and a pendant in this totally counts. Right?

On the downside, there’s quite a lot of menu hopping and multiple shop visits required between missions, which could have been simplified by letting you do more from the pause menu, but you’ll get quicker once you get to know your character more, and you most certainly will.

Playing as part of a team is a core focus of the game and there are multiple ways to enjoy it. You can recruit AI companions by finding their bones out on the battlefield and have them resurrected at the village (the game’s hub). You’ll often find ones at a higher level than you, which is useful for tackling tougher stages.

The game supports local and online co-op, although you’ll have to play at least eight hours (seriously though, they will fly by) to unlock the online options. The game is awesome fun when played with friends locally though. You can have multiple pickable characters saved to one profile, but each character must start the game from the beginning if you ever want to use them on their own, although they can still gather XP and equipment when joining the campaign of a character further on in the story. AI players can be swapped for online ones once you unlock that side of the game. You can opt to join someone else’s game, which could take you anywhere, or you could just allow people to enter yours.

The game’s structure initially involves completing stages as they unlock, while occasionally replaying some of them to beef up for tougher stages ahead. Afterwards, you’re tasked with playing them again, but with the option of a harder B-route, taking you on a slightly different path with a brand new boss encounter.

It’s around here the game gets a bit tough as even older stages see enemies given a level boost, but not in an unfair way. There’s no sudden spike and you’ll earn more XP than your initial visits too, even if you stick with the A-route. This stage of the game’s long quest also gives you the option to go back to the hub after each level, or try another random one with increasing multipliers for treasure, XP and loot quality the longer you stay out in the wild. You’ll need to keep an eye on how damaged your equipment is getting though. That said, those rewards can be tempting.

I’ve put a fair few hours into the Vita version of the game in addition to my time on the PS3. There’s a nifty cross-save feature, where you quickly upload your save to the cloud from the main menu and you’ll find it waiting for you on the other machine, allowing you to resume where you left off. There’s no cross-buy incentive though, so you’ll have to splash out on both separately, which could be pricey, so maybe wait a while for the other to come down.

The Vita version is almost identical. The touchscreen trumps the PS3’s right stick for discovering treasure or unlocking doors too. The graphics are just as good, but there’s the mildest hint of slowdown. Another minor nitpick is the missing durability meter underneath equippable items in the menus, making checking the remaining lifespan for your or AI companions’ weapons or armour a bit of a hassle. With any luck, this could be patched in. Hey, it could happen. Atlus have just announced an update is on the way to allow cross-play functionality between the two versions so PS3 and Vita players can team up online.

Those tiny differences mentioned above (and my preference for a pad over the Vita) give the console version the nod over the handheld. But if you’re big on handheld gaming, it may suit your needs better. Both are playable online anyway, but if you’re able to get people round to play it with you on the TV, then a PS3 copy is a must.

The Short Version: Dragon’s Crown is the sort of game I’ve been waiting for since the Mega Drive. A compelling side-scrolling fantasy beat em’ up, that works in multiplayer or solo and can be played for hours on end thanks to the RPG components and never-ending loot.