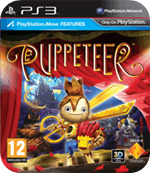 Proof that running with scissors is fun after all

Typical, just like waiting for a bus. We’ve been waiting for a decent platformer for ages, then two come along at once in the shape of Rayman Origins and now Sony’s Puppeteer. So, rather than stress yourself into an early grave trying to beat all the timed challenges in Rayman once you’ve made an initial playthrough, pick up a copy of Puppeteer as it’s been released cheaper than most new games.

This is classic 2D side-scrolling territory, the purist’s choice of dimension for platforming. As you can see by the visuals, this is going for something a bit unusual with its handcrafted puppets and theatrical stage design. While knee-jerk reactions may compare the visuals to LittleBigPlanet, the fact of the matter is that this is a considerably better-looking and better-constructed platformer. I love how so much of the scenery is interactive and not just painted on. With every scene transition, you see everything bounce as if the stage has literally just been dropped into place, giving everything a touchable physicality on your TV.

A few hammy accents aside, the sound design is excellent throughout too. Play it through some loudspeakers if you can. The voices boom out from the stage and there’s a crowd that applaud smooth platforming sections and victories against bosses and bathe the stage in a warm laughter during funnier moments. 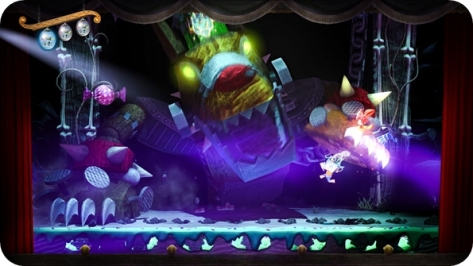 The stages take a visit through classic video game locations like haunted houses, colourful towns, the Wild West and more, all given a beautiful design that perfectly recreates that theatre feel. If feels like running through all your favourite platformers of years ago with the likes of Castle of Illusion and QuackShot particularly coming to mind for me.

Click here to read the rest of my review at NewGameNetwork.com.