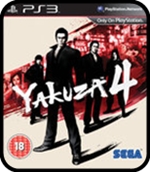 It can be a bit of a tough sell trying to get pumped up for Yakuza 4, seeing as it’s been out in Japan for a year and they’re getting close to the release of the zombie-packed sequel Yakuza of the End. But hell, Yakuza 3 was a pretty damn awesome beat em’ up adventure game and we won’t be seeing the Kamurocho walking dead anytime soon so let’s just try and enjoy it.

Unlike the past games you’ll be playing as four different characters, each of whom has their own storylines although their paths occasionally cross. Each of them also has a different fighting style and access to some exclusive character-specific minigames and side-quests.

The first part of the game puts you in the shoes of Akiyama, a money-lender who tasks his clients with passing strange tests before he’ll lend them the cash. He’s an unusual type, a golden-hearted loan-shark without the predatory bite. He also runs a hostess club.

Series fans were bitter to see the hostess aspects cut from the UK version of Y3, but they’re back in full now. Not only can you be a client, but you can train up the girls to perform better and earn more money. A bit creepy? Yes. Will you waste hours of your life doing it? Probably.

Saejima is an ex-con out for revenge. He’s not particularly interesting himself but his assassin hit of ‘85 is shown with a stylish cutscene that is easily one of the coolest of the entire series. Tanimura is a young cop who likes to gamble (hello Casino minigames) and has a multi-cultured background that makes him able to speak most Asian languages, which opens a few extra areas of the city for him. His story is based on looking for the truth about his father, a murdered cop. Series star, Kazuma is the final character and will crop up throughout the game. Going into details would lead to spoilers so *zip*. Don’t worry he’s sent the orphans on holiday at least.

The characters all have different fighting styles. When Akiyama’s not giving out money or training up  hostesses he’s generally kicking ass. No punch moves for him, as his style is all about wrapping his polished shoes into the faces of any thugs or Yakuza foolish enough to think he’s as soft as his business. Saejima is a brawler who likes to charge up powerful strikes, while Tanimura prefers to parry attacks and punch people in the back of the head. Kazuma is an all-round bad-ass and the sharpest dresser, as you’ll know from the previous games.

Aside from the different styles, the fighting is familiar, with random encounters in the streets and boss fights against foes with multiple health bars. Heat actions are bone-smashing power-moves that are built up by standard attacks and taunting. Weapons like knives, bottles and street signs all return too. Somehow though, it’s worse than before though thanks to the lock-on feature having become a broken mess. It releases too easily and without warning, often turning you around and kicking thin air while your opponent lays a powerful five-hit combo into the back of your head. It’s incredibly frustrating to say the least, especially when the last game seemed to nail the combat so well.

Having four different characters does keep the game feeling fresh, but it’s disappointing that once their story is finished you’re immediately thrust into the next one, leaving behind the substories and exclusive minigames. Thankfully a mode is unlocked after finishing the game that allows you to play on as any character at your leisure.

There’s so much to do once again. The minigames alone can swallow up days. Pachinko, Mahjong, baseball, bowling and arcades are a small number of what’s available. Other modes can take up even more of your time. As well as the aforementioned hostess training there’s a fighter training mode, or you can enter the arenas yourself.

The pastimes also serve another purpose other than to distract you; like unlocking extra combat moves by helping an old man with his mine digging, or finding ‘inspiration’ moments by studying Kamurocho’s stranger citizens. It’s just a shame that there are very few opportunities to engage in freeplay activities as there’s usually some emergency you have to deal with straight away. On the other hand, the game gets off to a much better start than the painfully slow orphanage opening inY3.

The main criticism is that the main meat of the game is too familiar. Kamurocho has barely changed since Yakuza 3. There’s an underground mall, sewers and a car park, but otherwise, new locations are disappointingly few. It’s very much Yakuza 3.5. Not the worst thing in the world for fans, but a lazy effort overall. I’m the first to blast GTA for releasing the same game all the time, but at least they make an effort with the city.

Cutscene quality varies throughout. There are voiced ones using the in-game engine, where faces look a bit bland. But separate FMV ones have much more facial animation and finer skin detail, making for some of the best scenes on PS3. There’s no dodgy English dub as the audio remains faithfully Japanese which is a much better choice.

The story varies between and mega-cliché and excellent with alarming regularity. Take the prison escape level, the amount of times the escapees stop and talk about friendship and trust is just insane, it’s like time slows down just for their bro time. The story of Saejima’s sister since his incarceration is touching and even brat-cop Tanimura’s journey for the truth is suitably gripping. As for Kazuma, well everything about him screams movie star-style charisma.

If you’re having problems following the story there are plenty of tools to help you out. A compilation of cutscenes can be viewed for each of the previous games to bring you up to speed, although this story doesn’t rely on the series’ history much. A character grid will explain who everyone is and it will also update itself with recent developments about them. It’s a flawless system and it works especially well if there are gaps between your playing sessions.

This isn’t the sort of game you can play for half an hour at a time, as some cutscenes will last 20 minutes and some save points are far apart. If you’ll sit back and let it, Yakuza 4 will swallow days whole. We’re talking 15 hours = 12.3% completion.

On the one hand this game doesn’t make a great effort to do anything different to Yakuza 3, but give it half a day and you’ll be hooked in for weeks as you rediscover Kamurocho with Kiryu Kazuma’s new friends.

The Short Version: Not the classic it could have been thanks to recycling too much from Yakuza 3 and damaging the combat on the way. Fans won’t be able to stay mad for long though thanks to the high points of the story and the wealth of extra distractions Kamurocho has to offer.