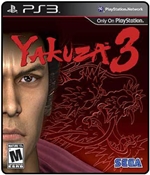 How to describe Yakuza 3? Well it’s an RPG beat ‘em up stuffed with a huge variety of mini-games to distract you from the games story that involve multiple Yakuza gangs and government conspiracies in Tokyo and Okinawa. Oh and you look after an orphanage too.

Players new to the series are welcomed by detailed compilations of cutscenes from the first two games that make a decent effort of bringing you up to speed. Long story short, Kazuma (that’s you) climbed the ranks to become the 4th Chairman of the Tojo Clan of the Yakuza, didn’t fancy it and went to start an orphanage on the Japanese island of Okinawa.

You’ll need a lot of patience if you just want to crack heads as Yakuza 3 doesn’t really get going for around eight hours. For the first five hours you’re pretty much doing errands for the orphanage and helping the kids out. To be fair there are some decent stories here that make you feel quite bad for these kids. It probably goes on a bit too long though. The orphanage comes under threat and Kazuma is slowly (so very slowly) drawn back into the Yakuza’s world.

The two open cities aren’t huge, but this isn’t a problem as you don’t drive cars anywhere so having a full sized city wouldn’t work. What you do get though is one of the most unique visual experiences on PS3. The explosion of luminous colours that line the streets and the shelves of the many stores are just dazzling, western cities are just so god-damn dull in comparison. The sunlit locations make all the difference too; everything’s so bright and well-lit. For night scenes the sun is replaced by the neon-soaked metropolis of shop signs and advertising boards. The world of Yakuza 3 is just such a nice place to spend time in. Well, apart from thugs trying to mug you every two minutes.

Fights kick off when you’re running around the city, usually by random thugs trying to mug you in teams of three or more. When they do, a crowd gathers around and the music rocks up a notch. It’s the fights that take place in the main game and the Substories that work best though thanks to the way they’re built up with dialogue. Sega have created a cast of utter bastards that you just can’t wait to slap the shit out of as soon as the music says it’s go time.

Once the pace does pick up you’ll start getting into fights more. Fighting starts off basic but satisfyingly brutal. Using standard and strong kicks and punches with throws, Kazuma builds up his Heat meter, once powered you can activate an awesome move. Environmental ones will see him slam heads into walls, swing people into lamp-posts or suplex them onto a railing. New Heat moves are unlocked as you progress, but there are barely any more normal moves to unlock. Normal scrapping moves sometimes feel like filler until you can unleash another Heat one. Not so bad for fighting random goons, but boss fights can drag out a little when they block most regular combos. Also the lack of a lock-on button can be a bit annoying.

There’s some variety when some idiot attacks you with a weapon though as you can take it off him and really show him how to use it, the Heat moves here are just nasty. I was thinking why’s this game an 18, then Kazuma did something with some pliers and I stopped wondering.

You can pick up objects on the street to wrap around thug’s faces too. Anything from traffic cones to bicycles. During one odd boss fight we were swatting each other with giant two-seater couches. Love it.

Yakuza 3 has more in common with Fallout 3 than it does GTA4 thanks to the enormous amount of ‘Substories’ that’ll drag your attention away from the main story, even mid-mission if you let them. Some of them only last a few minutes or you may be away for over an hour. There’s a list in your menu of the ones you’ve found but the rest are blanked out with ???? There are over 100 of them for you to find.

Main story missions seem to be more of a vehicle for dialogue than they do fighting. This is where you’ll find the boss fights and introductions to some of the game’s side quests, like the fighting arena.

Some missions require you to chase people and keep barging into them to tackle them. These sections are great with you judging your speed to avoid bumping into pedestrians and having to jump over obstacles.

There are murder mysteries to solve, missing people to find, tattoos to be finished, buried treasure to find, martial arts movies to star in and don’t forget the shopping on your way home. You’d think that after 17 hours you’d be more than 14% through a game, not this time!

Then there are the mini-games. Some of which are introduced to you during the story, like golf. There’s actually a half-decent golf game here, putting’s a little off though. Darts will take longer to master than it did in GTA4, as will pool.

Karaoke rooms activate a Benami rhythm action game (think of it like SingStar or Rock Band with button presses only). These scenes are hilarious and chilling in equal measure. Just look at Kazuma’s cold eyes of hatred as he claps along to the chirpy J-Pop tunes. The arcade has a glossy HD shooter and a prize grabbing claw machine that just like real life, screws you other 95% of the time. And no, there’s no option to smash it up.

Revelations are bizarre tasks where you track down strange citizens, take pictures of some randomly crazy action that goes on, and then pick the correct phrase (or try again later) to unlock a new fighting move. It’s probably one of the more important mini-games to get on with thanks to the rewards.

There are gambling games too and even more, enough to fill a whole review on their own. What a nightmare of a game to review with constant distractions from the main game. Oh well, who needs sleep!

Production values are high throughout the game. As well as the aforementioned cities, the graphics for character animation is superb. The facial work is up there with the best this generation. There’s no crappy lip-syncing either as the game thankfully opts for subtitles, keeping the Japanese dialogue in place to really add to the atmosphere.

There’s just so much game here, it’ll plug the gap nicely if you’ve conquered the likes of Fallout 3,Borderlands and GTA4 already. The pace may drag for the orphanage sections, but the way the game constantly tries to grab your attention with side stories and mini-games will just swallow your days and you won’t mind one bit.

The Short Version: Yakuza 3 offers excellent value for money and a long, long experience rich with variety if you have the time. The main story’s not great but the little ones are and the combat is suitably meaty making every fight bone-crunchingly spectacular.

One thought on “Yakuza 3 (Review)”