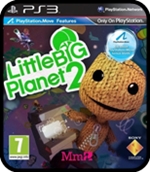 After the success of the original, which spawned millions of levels, the guys at Media Molecule have decided to see what we can do when they throw a bigger tool-kit at us to create any type of game we can think of. The short answer? Absolutely kick their ass at their own game.

First things first though. The new story mode makes up the meat of the offline single-player game, although up to three mates can also play along online and offline. The plot is simple, the evil Negativitron is hoovering up all the world’s best creators and destroying the planet’s creative buzz. The action of the cutscenes is well done but the characters are a nightmare of awful dialogue that makes The Mighty Boosh seem about as zany as an episode of The Antiques Roadshow.

The hype boasts 50 levels, but quite a few of them are brief, albeit fun minigames including bouncing challenges, air hockey, pool, rat racing and more. Some of the story missions arelonger than before and even come in two parts, which makes collecting the Ace award (complete the level without dying) even more difficult.

For the first third of the story it’s an overly-familiar plod though some platforming stages. For a game so reliant on platforming, it’s shocking how much Sackboy can’t jump for shit. Yes, Sackboy’s still rocking his lead boots for the sequel resulting in woefully weedy jumps. He still hasn’t learned how to deal with jumping from anything other than a completely flat surface either. When jumping from an angled surface he’ll jump at a useless 45 degree angle, usually into a platform head first. The transitions from background, middle and foreground are still a little unreliable too.

At least he has a few new toys to spice up the platforming. Some stages provide a glove to pick up and throw heavy objects, or a hat that fires cakes to make extra platforms or maybe water to put out fires. The new grappling hook is a good idea, but it’s too tricky to gather momentum without reeling yourself in thanks to the analogue stick taking on too much responsibility. It does get easier with practice, a few violent curse words and the ability to abandon pride and stupidly perched prize bubbles.

There’s plenty of new additions to distract your seething resentment though. The new Sackbots are delightfully cheery scamps that follow you around and make themselves useful to throw at hard-to-reach switches or to swing off when they chain together. There’s no command-issuing though, which would have been a natural step, maybe something similar to the Ratchet & Clank games. Expect to see them on keychains and t-shirts very soon though.

The vehicles have been greatly improved since last time out, where you’d basically have a ‘go fast’ lever and your own body weight to try and stop it flipping over at the first slope. Cars have been replaced with robotic animals to travel around on. Robo Bunnies are used to hop around at great heights and then stomp downwards, the pubs move sideways and have a sonic yelp to attack enemies, but the best animech by far is the spinning hamster of death. The insane creation zooms along floors, walls and ceilings and can jump high too. You’ll love it.

Playing the game with multiple players can be a rewarding experience, especially when you team up to get hidden items. You’re all still stuck sharing the same screen though (even online). Trying to keep four players together through a tough jumping section is always difficult as players reach opposite ends of the screen and bounce off the edge of it and into a fiery death again and again. Also, when other players join, the game is often interrupted for a second with a loading screen. Not great when you’re mid-jump. The arena based minigames are the best place for multiplayer, you’ll keep your sanity longer doing the platforming solo.

The story levels are a mere taste of what we can look forward to online in the coming months though to be honest and that’s where you’ll be heading as soon as you finish.

Hidden away in the Extras section selectable from the PS3’s XMB rather than in-game you’ll findSackboy’s Prehistoric Moves, the PlayStation Move part of the game. This separate story sees Sackboy avoiding dinosaurs and volcanoes and even running around inside a T-Rex. In many ways it’s a lot more fun both visually and to play than the main game’s story mode.

You’ll need two players for this, one to control Sackboy, the other on the motion controller. The Move is used to grab anything pink, mainly platforms and moveable steps to help Sackboy make his way though a level. Or you can pick up torches to ‘frighten’ monster platforms to do your bidding, or move a rain-cloud to put out fires. The best use I found was to hold a semi-circle shaped rock above Sackboy as he crossed an area being pummelled by flaming rocks from above. It can be a bit basic at times, but the tougher parts make this an excellent co-op adventure. Fingers crossed some Move options will be patched into the create modes.

As you already know, the Create mode has been expanded to allow you to make more than just platforming levels. You can now make an attempt at any genre you fancy. So it seems like a strange omission that when you dive into the create mode you can’t begin by choosing a rough genre to start with, such as side-scrolling shooter, arena shooter, rhythm action, top-down racer and so on. Instead it’s almost like you have to trick the game into creating one of those from what it thinks is going to be another platforming scene. This is done by manipulating camera angles, adding vehicles and rewatching lots of the many tutorials, nicely voiced once again by Stephen Fry.

Some features in your tool-bag are only unlocked after watching specific tutorials which can be annoying if you just want to dive into an online guide to fix up a quick racing game. On the plus side these tutorials are helpful as you can repeat the video’s actions simultaneously to get the hang of it.

Creating simple platforming stages is the best place to start or maybe even just making some crazy enemies, bots or vehicles. You’re free to publish any of your creations online and there are already millions of them out there. You’ll have to hammer the story mode to unlock items, by finding them in the levels and achieving the goals. The essentials aren’t too tough to find though and all your stickers and creations from the first game will be ported over if you still have the save files.

The Create mode is seriously daunting but there are plenty of guides online already and the wealth of amazing content out there will inspire you to give it a go. It could have been made a lot simpler though while still maintaining the depth for the experts.

Amazing. That’s going to be your main buzzword through your first few hours looking through the picks of the new levels. At first I was enjoying simple games of Peggle, Tetris, a Vietnam FPS shooting gallery and an old-school arcade shooter.

But people have made even more ambitious projects, such as a basic version of Street Fighter or a recreation of the light-cycle races from the recent Tron movie. Or there’s the new material crafted from the cutscene movie-maker where artists can make miniature movies as a part of a level, or just as a standalone feature. The most enjoyable of these so far include a LBP-Sweded version of the finale to Back to the Future and a first chapter of a homage to Heavy Rain called The Lost, complete with music, cutscenes and bleakness.

Inevitably some creations are going to be removed because of copyright infringements, but they’re getting a great reception while they last. The star voting system has been replaced with a good/bad vote which is a little harsh to be honest, but will at least get you off the fence. Dedicated players can now leave full reviews of a level and even point out bugs so the creator can continue to perfect it.

Another cool addition is the ability to queue up levels to play later on from the game’s website. Visitlbp.me to browse through the best rated levels, as voted by the community and Media Molecule, and add them to your list after you’ve signed into your PSN account on the site. Next time you play the game they’ll be waiting for you without you having to search again.

We’re going to have to keep our eye on what appears on the servers as it’s still early days, just imagine what people are going to be creating after six months of getting used to the new features. It’s going to be even more incredible than it is now. The flaws of the Story mode and the semi-closed nature of the Create mode stop this scoring higher, but don’t let that put you off this unique experience.

The Short Version: There’s never been anything quite like this before, including the first game. LBP2 is so much more now that gamers aren’t limited to the platforming genre. The single player game is just a warm up that hopes to inspire you to create something amazing of your own. The user-generated game creations are where the real gold is to be found. It’s not Media Molecule’s game anymore, it’s ours.