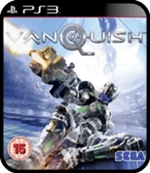 Vanquish is the latest effort from Platinum Games, the minds behind Bayonetta. This time they’re looking to put a boot up the backside of the third-person cover-shooter genre. How? By combining rocket boosting, bullet-time and cover-shootouts that’s how.

The story is nothing more than a vague excuse for the fantastic setting on an orbital colony built on a looping surface with lots of bots and giant mechs to blast apart. It’s the future and a Russian rebel group are trying to take over the world (but in space). Just go with it.

You play as Sam, the DARPA agent trying out the new Augmented Reaction Suit or, um, ARS. This robotic suit allows you to slide around on your knees while blasting away with the guns. A slow-motion effect can be turned on to line up the best shots while you’re sliding around on your knees like a jet-powered man-child on a wedding dance floor. The boost sliding is handy for getting to cover quickly and out-manoeuvring the enemy too. It never gets old and provides more than its fair share of classic moments. Like sliding on Sam’s knees underneath a ten foot tall Romanov robot shooting it’s ‘undercarriage’ all the way. 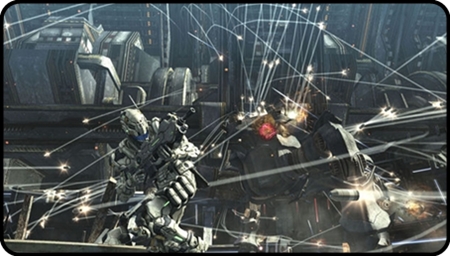 The cover-based side of the game feels pleasingly familiar and fantastic fun from start to finish. As the weapons feel extremely accurate with very little recoil getting in the way and moving between cover is a breeze with simple transfers and cool boosting. You can even light a cigarette while taking cover and then throw it to distract the enemies.

Sam can hold three different weapons along with frag and EMP stun grenades, all selectable with a tap of the d-pad. There are assault rifles, heavy machine guns, shotguns, lock-on laser missiles, rockets, low frequency energy spheres, snipers and a spinning disc launcher to choose from.

If you have maximum ammo and then pick up the same weapon again, it will gain a rank, military-style. Every few ranks will reward you an upgrade like a bigger ammo capacity, or faster lock-ons for the rockets or extra targets for the laser designator. It’s a great system that will have you hunting around to top up your favourites. Also, the rank will remain if you dump a weapon, when you pick it up next time. You do lose a rank each time you die on normal and hard difficulties though.

There are plenty of ‘wow’ moments where the scale of the action seriously impresses. An early level has a huge ship crashing nearby (seriously it’s massive) and it all happens in real time without the game’s frame-rate dropping at all. Other moments worth taking in the view for would be the train level where the opposite train starts to travel upside down along the vertically circular track that surrounds the colony. Or maybe the boss fights that launch hundreds of missiles at you making for a great scene where you can slide away in slow-motion and pick them off mid-air with your assault rifle.

The design of the levels with a more open view often offer spectacular visuals and there aren’t as many corridor section as we’ve come to expect in the genre. One consistent problem though is the lack of colour variety. Vanquish’s environments are predominately grey or silver. Its like Sega’s colour budget has been wiped out by Sonic & Sega All-Stars Racing and Sonic 4. At least the explosions and red enemies add a bit of variance. It’s not as big a problem as I originally thought it would be to be honest. The action’s so good, I got over it pretty quick.

The scoring system could have done with a bit more work as it’s a little vague. Chaining together kills for a points multiplier seems like an obvious omission, especially considering the frenzy of some scenes. You should just enjoy the game first time around though and not concern yourself with the score leaderboards.

Platinum’s last title, Bayonetta was a class game, but the difficulty was a bit uneven, with it being too easy or too hard. Vanquish’s levels are much more balanced though. There’s a auto casual level that auto-aims for you, but you won’t get any fun from the game so just go for the standard casual or normal setting. The aiming in the game is so well-designed you’ll want it all to yourself anyway.

There are 30 levels spread over five acts. Each varies in length with a list of stats for kills, time and points given. A lot of levels then, but ultimately Vanquish is a very short game with my first playthrough taking just over four and a half hours and I wasn’t exactly rushing either. Did I have fun though? I had an awesome time kiddo. God-damn awesome.

There’s a challenge mode when you complete the game on Normal and there’s always God Hard mode to tackle if you’re feeling strong. The game may be short but you’ll probably start a new game as soon as the end credits roll.

The Short Version: Vanquish is a fantastically cool action game that is an absolute blast from start to finish that does what the great games do: make you feel like an absolute badass. I can forgive the grey/silver visuals, but marks have to be deducted for the short length. You should play this game as soon as possible though and hope for a sequel.