You’ll be glad to hear Sonic 4 features no story, no talking, no towns, no RPG elements and most definitely no Werehogs. This is very much traditional 2D Sonic from the glory days of the Mega-Drive that saw the best titles for Sega’s blue spiky mascot in Sonic 1-3 and Sonic & Knuckles.

There are four main stages with four acts each, the seven special stages and then the final boss. You can access the four main stages and first three acts in any order. All the stages are basically remixes of old ones with the main differences being HD shine, some new textures and the layout being put through the randomizer. Episode 1 features, a Green Hill Zone-style outdoor location to begin with followed by a labyrinth with underwater sections, a night-time casino and an industrial factory. They look nice, but there’s no avoiding the disappointment of getting nothing genuinely new.There isn’t really much else that is different to the original games. Everything you see here is a variation on what Sonic has done in the past. There is a level where Sonic has to use a flame torch to get around the level, lighting up other torches as he goes, but this level only lasts a few minutes. 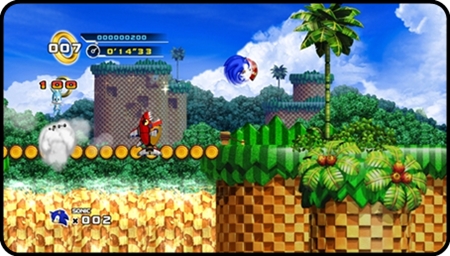 Bonus stages return if you can collect 50 rings and hold onto them by the end of an act and leap through the bonus ring. The stages are almost identical to those found in the original Sonic game. This time you rotate the level rather than control the jumping. There’s a harsh time limit in place with a few icons scattered around to give you more time, some stages even have barrier that you can’t get through until you’ve collected enough rings. They can get very tough by the fourth one, but the reward is worth working towards, the mighty golden Super Sonic, given to those that obtain all the Chaos Emeralds.

Sonic has retained his homing-attack from recent titles and it produces mixed results here. It works best for quickly going through a chain of enemies or pulling yourself towards springboards which can also be targeted.

The problem is that you have to only use it when the target icon appears. If you do it too early Sonic will perform a sort of sideways double-jump. Rather than stay in his standard protective ball stance, he will unfurl and stick his feet out making him vulnerable to the enemy he’s trying to jump on. This is where you’re going to lose most of your rings. Losing your rings is just as annoying as it was all those years ago, but at least you’re now equipped with some utterly horrible swear words to shout at the *****.

We can handle the narrow window for the homing attack, but why does sonic have to jump in such a vulnerable way? It gets worse, every time Sonic comes out of a high speed ramp he flies up into the air with arms and legs spread wide, meaning he’s going to get battered if he lands on any botniks below. Why Team Sonic have decided this is better than his traditional ball shape for every jump is beyond comprehension. Sonic’s old age seems to be getting to him too as he definitely accelerates slower than he used to.

As far as I could tell, all the botnik enemies are replicated from the original games. Even the bosses are the same. They might vary their tactics a little after a few hits, but essentially they’re the same. I couldn’t believe it when this extended right through to the final boss, one of my childhood nemeses. While it was nice to see the old gang (apart from that green bastard mantis with the throwing claws) in redesigned HD, it’s disappointing to see that in sixteen years nobody could be arsed coming up with anything new. It’s not a fan homage, it’s lazy, let’s be clear.

It was surprising to see what had gone missing from the series. The power-ups have been thinned down to the speed, shield and invincibility ones. The fire, electric and bubble ones have been sadly axed. You can forget about any sort of multiplayer too as Tails is nowhere in sight. The split-screen races of the Mega-Drive titles were great fun, so fingers crossed it’ll make it back for Episode 2.

At £9.99 it’s a little over-priced for a title you’ll race through in less than three hours the first time, but you may be drawn back in to climb the score and time-attack leaderboards. Or more likely, get all the Chaos Emeralds.

If you’ve not played the Mega-Drive classics, then you can probably add an extra mark to the score as it won’t seem like such as re-hash, but for the rest of us, it feels like Team Sonic have relied on nostalgia way too much.

The Short Version: It’s good to see Sonic in 2D again after over a decade of shoddy titles. It’s a little too familiar though with old levels and enemies getting a bit of polish and not much of anything else. Some might say this is the Sonic game Team Sonic should have made sixteen years ago. I’d say it pretty much is the game they made sixteen years ago.

One thought on “Sonic the Hedgehog 4: Episode 1 (Review)”