It cheers me up every time I explain this game to anyone. It’s a 32 player, medieval era game of capture the flag, except the flag is a Princess. And to make it extra difficult to get away with her, the other team stuff her with cake making her a Fat Princess meaning it takes much longer to carry her back to your castle. If you don’t laugh every time you hear her scream “CAKE!” you probably never will.

The maps are symmetrically designed so no team has an obvious upper hand. As you can see by the pictures, the game’s gone for a cartoonish, cell-shaded style that belies all the blood and gore plastered all over the battlefield. It’s a treat to look at and is razor sharp on a HD set. The locations include forests, volcanoes, tropical islands and mountains. 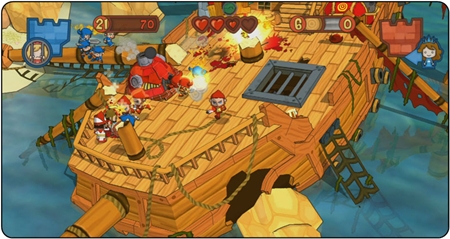 The single-player campaign (under the childishly amusingly named ‘Play With Yourself’ option) is merely a training device to show you the game modes. There are capture the flag (Princess) options, varying from do it once and make sure you still have theirs in captivity, the other is to do steal their princess three times. Invasion mode is like conquest mode in the Battlefield games where you capture towers (also used to drop off wood and metal) instead of cake addled rich kids. Team Deathmatch; kill the other team, simple as. All the above are online games too. There is also the Gladiate mode where you pick a class and try and stay alive through twelve waves of enemy soldiers on your own.

There are five classes that have their own unique advantages and they can all be upgraded once for extra weapons and abilities. You choose your class by picking up a hat from a machine at your base, or by picking up a blood soaked one off the battlefield from either team.

The Warrior has the most health and carries a sword with a shield to deflect arrows. His upgraded weapon is a halberd which has a devastating but inaccurate charged attack. The Ranger rapidly fires arrows from a bow and can upgrade to a painfully slow musket-style shotgun. The Mage fires fire balls and can upgrade to ice shots that temporarily freeze opponents, which comes in handy when making an escape with the choddy one, the charged attack produces an area attack of one of these elements. The Priest can heal individual troops or produce an area healing blast, or when he nabs an upgrade he can do the opposite to the enemy as the Dark Priest.

The most important class though is the Worker. This fella is the one that’s the backbone of the team. He collects wood or metal for upgrading the hat machines to level up the classes, or make human catapults to fling yourself deep into enemy territory, sometimes right into their castle. He can also build siege ladders and smash wooden manholes over underwater tunnels or break giant boulders blocking paths, and build bridges. So yeah, he’s the man. And the best thing is that you still rack up the points for all these things, so you can still be top of the table at the end of the match just by helping out. Christ, I almost forgot the little sod can hold his own in a fight too using his axe, or once he’s upgraded, throwing bombs that detonate on impact.

There could have been one extra class though. A physical trainer for when you find the Princess in the enemy castle and they’ve pumped her to the max with cake. Make her do star jumps before you roll her out. Hey, rolling her should have been an option! 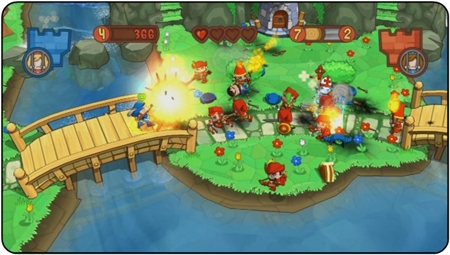 To succeed in stealing the Fat Princess you have to learn to work as a team instead of everyone from both sides just meeting in the middle and ripping the shit out of each other for half an hour for a total stalecake, sorry stalemate. Often all it takes is no more than three going in together, usually with a Priest to heal you, to escape with Her Royal Podgness. Just loiter around the catapult until you build up a little squad, or get a headset to shout out a request for some co-ordinated tactics, remember the more of you carrying, the quicker you can move her.

It is possible to escape with her on your own if she’s not been fed, but there’s not much more gutting than finally getting into the castle to see her bulging out of the cage shouting “CAKE!” at you. Actually it’s still funny even then.

There is a lock on feature for targeting enemies but it’s very loose and never wants to target the Ranger shooting you, just the flat-footed Warriors.

But only thing that’s really stopping the game scoring higher is the poor online set-up. Once you’re in a match it’s fine with no lag or anything. It’s just getting there is a nightmare. You don’t pick from a list of open games you can pick a specific map or mode to search but I never got one result. Not one. Instead I’ve had to just go for the ‘Jump In’ option which is just get what you’re given.

Because of this the game only just scrapes a 7, but a few game patches could sort this out. It could just be a case of the game being busier than originally expected and extra servers needing to be added. When it works this is an impressive title with 32 players going at it, even if the matches do drag a bit sometimes when nobody’s working together. Put the effort in though and you’ll love a slice or ten.

One thought on “Fat Princess (Review)”