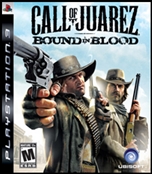 The Western genre in recent years has been criminally underused both in the cinemas and gaming. The only games that spring to mind in the last five years are Red Dead Revolver, Gun, the vampire flavoured Darkwatch and the first Call of Juarez title (PC and 360 only).

Hopefully we’ll start to see a few more, as Bound in Blood marks a series and genre really starting to demand (and be worthy of) attention as an alternative first person shooter contender to the sci-fi of Halo and Killzone or the near-future of games like COD: Modern Warfare and the Tom Clancy titles.

Like any decent shooter this game knows it’s all about the weapons and atmosphere. As such it borrows from a wide range of western cinema including classic John Wayne style to Clint Eastwood cool.

The setting has you playing as one of two playable brothers, Thomas and Ray, who bicker and fight like a pair of western cliché (in a good way) gunslinger versions of Kane and Lynch, with the added inconvenience of being related to each other. After deciding they no longer fancied taking orders as soldiers for the South in the Civil War they desert to go save their family and home.

Naturally they’re too late, but they do manage to save their younger preacher brother. And within ten minutes you’ll wish they hadn’t. Young William acts as narrator to the story and constantly tries to act as the brothers’ moral compass, trying to get them to find the Lord. By half way through the game I wanted to tie him to a rock in the desert and leave him. 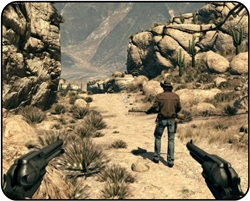 The awkward trio set off to find hidden gold in Mexico. Cue lots of sleazy, cliché spitting Mexicans and more women for the brothers to argue over. All while being hunted down by their old army buddies who want revenge as they blame the brothers for them losing the war. Rather than all the incest.

Missions generally involve fending off Southerners (still US, not Laaandon you slaaag), hunting down gang-leaders, horseback chases, and escaping on stagecoaches or in canoes.

The graphics hold up well with lots of detail and varied settings that don’t repeat themselves too often. There are mines, small towns, deserts, and mountain woodlands (one of the best ones). The long distance vistas are the most breathtaking though adding immense scale to some of the locations usually with an epic mountain in the distance that dwarves everything.

The music is classic horns and acoustic guitars with a slightly lonely feel that reminded me a little of Fallout 3 in some of the more open, desolate areas. It’s got pretty much everything from any decent western film except for bar room brawls (fail), but on the plus side you can use a chair as a weapon at points.

The weapons were always going to be an essential element here. Apart from a few gatling gun scenes the weapons have a slow rate of fire and reload speeds which makes you make sure that every shot counts and a steady hand is key.

There are various revolvers, shotguns, snipers, throwing knives, arrows, dynamite and the mighty rifle which is devastating at all ranges and should rapidly become you’re favourite.

Ray and Thomas have unique abilities. Thomas is more comfortable with rifles and uses a lasso to climb in places. Whereas Ray can dual wield pistols, has dynamite and can pick up a dropped portable gatling gun. Thomas is great to play with but it was massively disappointing not to be able to pick that up. For the most part the brothers fight alongside each other but occasionally they’ll split up, which is where you’ll notice differences if you replay a chapter as the other sibling.

Each brother has a unique game pausing ‘Concentration mode’ built up by stringing a few kills together. Ray’s let’s you target 12 people or body parts then unleash a swarm of bullets (yes, just like Red Dead Revolver). Thomas’s auto-targets up to six people with you needing to flick the right stick back and forth like the hammer on a revolver. Both are fun and work like a get out of jail free card when you get in the shit.

High noon draws are how bosses are dealt with. After shooting them in the face a few times (sigh), they decide this is how you’ll settle up. Using the left stick to pace around each other and the right to keep your hand hovering over you holster, you wait for the bell. Then slam the right stick to your gun, aim and take your shot. Sometimes tricky, but still rewarding every time you gun them down like the dogs they most probably are. 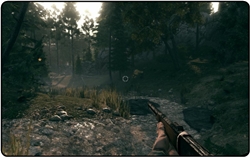 Anything annoying then, apart from preacher boy? A few bits, but no deal-breakers. The cover system is borked, it doesn’t ‘snap-to’ and it inverts the controls and well, goes a bit mad, so you’re better off just ducking and moving out normally. The game needs to load quite frequently which pauses the games for a few seconds, sometimes robbing it of atmosphere, especially at a duel where an opponent announces “three, two, one…” and then you get a loading screen. Also the frame rate judders occasionally. Oh and there’s no co-op which is strange looking at the games set-up.

But hey, the other online multiplayer modes make up for it. With the usual deathmatch options given a decent twist by having kills rewarded by money based on how well the victims are doing in that match. So the person at the bottom can climb up very quickly if they keep killing the top players. Cash can be used to buy temporary upgrades for that match or saved up to buy new characters with different stats.

Other modes include hunting down or protecting a wanted man or stealing money and blowing up banks etc (see below video). The locations are similar to the single player games with town shootouts providing some classic movie style moments. The only bugbear here is that dodgy cover system that keeps trying to make you duck down at every window like you’re proposing to it.

Overall this is a surprisingly high quality first person shooter, with a rich atmosphere with two varied playable characters and terrific weapons that are more rewarding than the automatic spray and pray weapons we might have become overly reliable on. At seven hours for one characters playthrough it manages to consistently surprise and please with its gameplay and locations. So slide developers Techland a few down the bar and hopefully they’ll be convinced to saddle up and find some more gaming gold.

2 thoughts on “Call of Juarez: Bound in Blood (Review)”