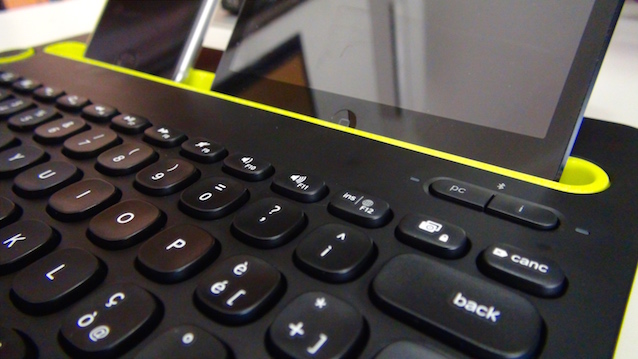 The multi-device keyboard you’ve been asking for

Miss the world of buttons and keys? Anyone using a smartphone or a tablet will know the pain of pressing the wrong letter when tapping in an email or text message thanks to the tiny on-screen keyboard.

As a long-standing Blackberry user, I recently made the reluctant jump to a proper smartphone and said goodbye to the precious keyboard (and hello to decent internet, admittedly) but as someone used to writing drafts for articles on my phone, I really needed a sound keyboard instead, especially when working away from my desk.

So when the Logitech K480 was unveiled, with the promise of multi-device connectivity, I knew I had to track one down. This neat keyboard works with the vast majority of devices running on Android, iOS or Windows, meaning it would be a perfect match for anyone wanting to use their tablet instead of hauling a laptop around with them.

You can connect the Logitech K480 keyboard to multiple devices with ease thanks to a quick pairing process. A handy diagram sticker on the keyboard walks you through the steps, so you needn’t dive into any manuals to get going.

The neat rubberised slot on the keyboard holds tablets and phones with no risk of scratching their surface. You can easily fit a tablet and a phone in at the same time too, which is where the unique feature of the Logitech K480 comes in. Using the round switch, you can sync the keyboard up with three devices at once. After the initial setup you simply turn the switch and within a couple of seconds, you’re able to type away on the alternate device.

The keyboard itself feels very robust and while the loudish clacking of the keys is initially very present, I found the sound quite reassuring and I managed to hit the well laid out keys with ease. I thought the large spaces between each key would have thrown my typing off a little, but you’ll be hammering through that word count like you’ve been using it for years.

Rather than a rechargeable battery, the Logitech K480 uses two AAA batteries. There’s no need to pull a face though, they’ll last you for two years apparently with average use. I’ve used the keyboard for a few months and haven’t had to replace them. There’s a solid power-off switch underneath to avoid wasting power when not in use too.

Let’s talk size. 299mm long, 195mm wide and 20mm thick means it will take up a fair bit of room in a backpack or messenger bag and I’d advise wrapping it up in a shirt or towel to keep it dry and protect from knocks. At 820g, it’s a bit heavier than most bluetooth keyboards, but the solid build quality makes it feel more reliable. You’re not going to want to carry it around with you all day, but if you have it waiting at your desk at work, or when working away from home you’ll be glad you have it.

The Logitech K480 brings that sense of immediacy we’ve gotten used to with the advent of tablets of having the internet available right there and then. This same ‘I want it now ‘approach is really handy if you need to quickly write something down on your tablet or you desperately need to do some work without powering up the laptop or desktop PC. There are plenty of free Word Processor apps available for tablets and this is the keyboard you should be using with them.

Even if you have one of the larger tablets, you have to admit the onscreen keyboard is a bit annoying when you want to go back through larger sections of text. With the Logitech K480 you’ll get to enjoy the full lushness of the screen as the on-screen keyboard is removed.

The K480 is packed with shortcut keys too for heading straight to your phone’s messages, searching and playing media files. These are really handy, although sometimes you may be better off just reaching over and tapping the screen. You know, for old time’s sake.

Some sort of trackpad would have been handy, especially if it could have worked with an app to provide an on-screen cursor for your tablet as having to select some of the tiny options in your average word processor is always a tad annoying. Some of the shift command subkeys like the ones we take for granted on the number keys are oddly implemented too, with some not giving you the ones you’re supposed to be getting. I still can’t get the “ key to function. I think this has come from Logitech trying to have different shift key methods across the android and iOS platforms. To be fair though, I usually just worked on drafts on the Logitech K480 as I’d still need to turn the laptop on to edit pictures and use content management systems to publish articles.

At around $49 in the States and £49 in the UK (that’s a dodgy currency rate!), the Logitech K480 is more expensive than your average bluetooth keyboard. But, to be fair, you’ll rarely find one that works so well. I bought a specialised cheap and tiny keyboard the same size as my Nexus 7 for about £17, which despite being ergonomically sound when snapped shut on the tablet, was a nightmare to type on with its tiny keys.

The added size of the Logitech K480 is a bonus rather than a negative as your fingers don’t need to adjust or compensate to an alien layout – you can get going straight away. The large grove will comfortably fit your phone in too and switching between devices if effortlessly smooth. Having lived with the K480 for a while now, using it with the likes of the Nexus 7, Samsung Galaxy S3 Mini, Motorola G and even the brand new Hudl 2 from Tesco has become second nature and I’ve saved so much time and escaped from many unwanted trips to the laptop. The only question you should be asking is do you want the traditional white one or the black one with a yellow device slot?