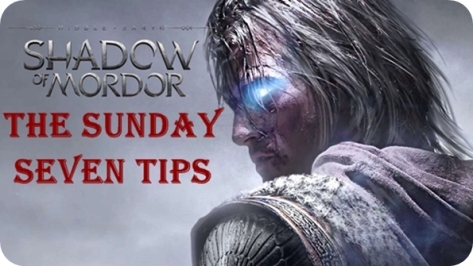 We’ve been playing a lot of Middle Earth: Shadow of Mordor here at tower Dealspwn and have frankly been loving it. As keen Tolkien geeks, the Mordor setting provides an intriguing look at an area of Middle Earth for so long trapped behind those daunting Black Gates. Taking place between The Hobbit and The Lord of the Rings is a great idea and rich with potential. Monolith tells how the one ring was forged and how a solitary ranger can play an important part when paired with an elven wraith. I’ve put together a few tips to get you started. As ever readers, be sure to share any you might have too.

Talion is a bit rubbish with a sword and takes ages to finish off enemies in a straight fight. So, be as sneaky as possible by using dagger strikes from behind, above or while hanging from ledges to thin out a crowd before attacking a Captain or Warchief. Don’t worry if you’re seen, you usually have a second or two to rush forwards and silence any Uruk before they get into a battle stance. The bow is also a neat weapon for silenced headshots which can get rid of those pesky archers.

Look out for enemies bathed in a green glow with your Wraith vision and single them out for a spot of interrogation for information on both the location and details of any Captain in Sauron’s army. You can then use this information to look at a future target’s strengths and weaknesses which can be immensely helpful in taking them out quickly. Later in the game you’ll be able to ‘brand’ targets and make them fight for you. If you’re planning on doing so, be wary of their weaknesses when you initially soften them up for the branding as you might accidentally kill them.

Get branded Uruks to kill Warchiefs

Beating the Warchiefs in the second half of the game can be much easier than the first thanks to the branding system. Brand Captains into your service on the sly and command them to infiltrate a Warchief’s staff by completing missions and taking out rivals and before you know it, the entire bodyguard team are in your pocket. So when you finally meet the Warchief, just activate them and watch as they butcher their master. You can even skip the pre-requisite challenge for drawing out the Warchief by having one of the bodyguards issue a challenge to him. This is exactly the sort of thing that makes Shadow of Mordor surpass our expectations.

Finishing off enemies is a bit of a pain in Shadow of Mordor. Basic attacks are weak and can’t be relied upon and finishers are usually interrupted even if you buy the skill to speed them up. So, chances are, using the special executions by holding Triangle and Circle (on PS4) to finish them off without fear of interruption is going to be your best tactic. These rapid firing daggers are an essential tool in getting your hit counter up to activate a special. You never run out and you can almost constantly chain specials later on in the game.

There are no difficulty settings for Shadow of Mordor, and Monolith has opted for a rather tough flavour to the action with it not taking much for your health bar to bottom out. Talion doesn’t carry any health potions or other such nonsense. Instead, he eats flowers – minus ten man points, naturally.  Keep an eye on your map for telltale signs of any plants and don’t be afraid to retreat from the action for a bit of battlefield botany. Aside from the stronghold areas, you’re never far from plant life. Uruks are a little slow, so you don’t have to run far in order to get far enough away to not worry about being attacked while you heal.

This currency is awarded for completing tasks and side missions. It can be spent on extra Rune slots for your weapons (adding stat boosts or perks), but for the most part, they’re really not worth the effort as decent ones rarely drop – it’s the Destiny fashion. However, spending Miriam on health expansions and extra arrows is immediately helpful and makes a real difference. Especially as Talion can’t take much damage and arrows help to keep you out of the fight for that little bit longer. Spend a bit on additional focus too, as extra slow-motion aiming is always a good thing.

Ok, you should treat yourself a little with those hard-earned Mirian points. Underneath the skilltree you’ll find three powers available for 2500 each. While it’ll take some effort to save up for one of them, you can buy them as soon as you have the currency without having to buy any prerequisite ones. I’d go for the Storm of Urfael which charges up with kills and can then be turned on by clicking both analogue sticks to give you infinite executions for a while, which is great against mobs or tougher Captains. The other two are for your dagger and bow (unlimited stealth attacks and infinite special arrows respectively), but I think the melee one will be more useful first.