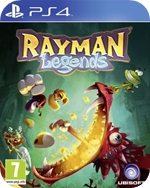 After being utterly smitten with the next-gen re-release of Tomb Raider last month, I was keen to see how last year’s rather tasty Rayman Legends fared on the next-gen machines too. Well, there’s good news and bad news.

There’s a strong argument that that Rayman Legends looks exactly the same on the new consoles as it does on the older ones and there’s no truly relevant new material. But on the other hand, shop around and you can currently buy it for only £7 more than the last-gen version, meaning you don’t have to spend much to finally play a decent platformer on your PS4 or Xbox One.

You’re probably wondering what else you’re getting with the new version? The most-welcome addition is the removal of loading screens, creating a seamless experience between levels. You can probably expect cramp a bit sooner too. Each platform has unique unlockable characters influenced by Ubisoft’s other franchises. The PS4 gets Assassin Ray while the Xbone has Splinter Ray, Ray Vaas, Globox Vaas and some exclusive challenge stages. PS4 gamers can use the DualShock 4’s trackpad to take screenshots or scratch the Lucky Ticket scratchcards and they can play the game on their Vita’s via remote access. If you’re trying to save hard-drive space, the install size from a disc for the PS4 version is 9GB compared to the Xbox One’s 4.3GB.

I was really disappointed to see that the Vita can’t be used in the same manner as the gamepad on the Wii U, where a second player would tap the screen to remove obstacles, move platforms or cut ropes for player one. Instead, we’re still stuck pressing the circle button while trying to keep our crazed speedrun going. For all we know, Ubisoft may have considered using the Vita for this. Maybe there was a latency issue that was too tough to get around. It’s disappointing nevertheless.

I suppose I had better tackle that earlier statement about the visuals now. I was always a bit confused at exactly how much better the UbiArt engine could be made to look given its unique illustrated style. The game ran at a crystal smooth 60 FPS on last-gen machines, so there wasn’t even an improved frame-rate to look forward too. The inclusion of ‘uncompressed textures’ doesn’t seem to be noticeable either. The enhanced visuals of the Definitive Edition of Tomb Raider was one of the key improvements to the title and for graphics whores like myself, a justifiable reason to re-release the game (don’t worry, there were other reasons too), but Rayman Legends on PS4 and Xbox One just doesn’t scratch that itch.

Well, that’s quite enough negativity for today, let’s not forget, Rayman Legends is one of the finest platformers on the market right now. It’s certainly the best available on your new console. Ubisoft’s inspired decision to return the series to its 2D side-scrolling roots worked wonders with Rayman Origins and the sequel blew the critics and fans away again.

Legends doesn’t stray from Origins’ winning formula, but it is a touch harder throughout for those of you wanting to rack up decent score of Lums. These flying collectible creatures provide the main scoring incentive for winning a Bronze, Silver or Gold cup at the end of a stage. The chance to score double points is now ever-present though with each Lum chain being worth double if you collect them in order starting with the purple one. Until you master a stage though, this frequently breaks up your momentum as you cancel a jump or realign your fall to make sure you get the purple one first as touching another will cancel the double-points opportunity. If you want those rewards at the end of a stage, you’re going to have get used to nabbing the Lums in order.

Lums aren’t particularly essential for progression though, so it’s only your desire to collect everything that will gnaw away at you. Freeing the captured Teensies is much more important though. Exploring the hidden nooks of a stage is essential to finding and freeing them. Thankfully,Rayman Legend’s stages are a joy to explore as you attempt to climb oddly placed platforms in the hope they’ll lead to some hidden goodies.

Some stages actively encourage speedruns though and they’ve never been more fun. Special stages feature an instrumental audio track (could be rock or classical) which gets extra instruments added to the mix in time with your jumps or attacks, so a jump may be a drum beat, or sliding down a chain will be a killer bit of fret-fiddling on a guitar.

There’s a hell of a lot of stages to get through in the main campaign, there are loads of extra ones and remixes to unlock and the daily online challenges will have you competing for top scores in a loop of competitive bliss. So, that’s Rayman Legends, excellent fun and challenging throughout. The format choice doesn’t matter though; you’re onto a winner regardless.

The Short Version: No discernible graphical improvements between last-gen Rayman Legends and this new version on PS4 and Xbox One make it an odd choice for a re-release. That said, there’s not much difference in price and the game itself is still a fantastic platforming experience that should be a part of any gamer’s collection.