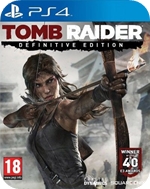 That said we were blown away by what our old machines were capable of with the likes of Beyond: Two Souls (visually at least), Bioshock infinite, The Last of Us, and of course Tomb Raider. So how much do we really need a re-release of a game that’s not even a year old? I admit I was sceptical, but as a fan of the game and a visuals enthusiast (my new name for ‘graphics whore’), there was no denying I’d struggle to pretend a PS4 version wasn’t of interest.

At the RRP of £50, this is a hard sell, but we’ve seen prices as low as £35, making this very tempting, especially for any of you yet to play the original game. And if you’ve not played the game yet, you’re in for an absolute blast from start to finish. I’ll get onto the new features of this Definitive Edition later on. But first, a refresher about the game itself.

Acting as a reboot for the long-running series, Crystal Dynamics’ game sees Lara shipwrecked on the much sought after island of Yamatai on her first real expedition. Separated from her crew, she has to learn how to fend for herself and scavenge for tools, parts and weapons.

Yamatai is inhabited by a murderous cult, providing the incentive to craft stronger weapons throughout. As was all the rage in 2013, Lara has a bow and arrow, and it’s absolutely fantastic. Most encounters allow for a stealthy approach, enabling Lara to stalk her prey and thin out their numbers before being spotted and forced to go loud. When the alarm is raised, Lara has a gradually increasing arsenal to handle it. Pistols, rifles and shotguns can be upgraded with salvage found throughout the island. Animals can also be hunted for salvage -let’s not worry too much about how you can upgrade an assault rifle with rabbit parts- but, wolves aside, most of them won’t attack you on sight.

The story aims to show how Lara became the adventurer we’ve always known her to be. Crystal Dynamics attempt at a character arc in parts does a great job. But over the course of a few days we see her kill a man for the first time in self-defence and being utterly distraught. She then goes on to regularly shoot people, smash them in the face with rocks, attack them with a climbing axe, strangle them with a bow and other grisly finishers without so much as wiping the blood from her face. She doesn’t even flinch when dropped in a pit full of hacked off limbs and giblets. It’s not so much a character arc, as a sinisterly poised psychotic break. But when ultimately, it is us the player driving these actions, it would be more odd to see her lament all the death after each firefight, especially when we’re having such a good time of it ourselves.

The pace of the set-pieces never fails to be spectacular and really keep the game’s momentum driving forwards with such an amazing pace. After years of Naughty Dog raiding and building upon Lara’s past exploits, Lara has returned the favour and taken inspiration from the Uncharted games. Now, with these two action-adventure giants running at peak fitness, their next games promise some staggering scenes.

Tomb Raider’s shootouts are always well-timed and don’t outstay their welcome or have invisible lines to cross to stop the surge like a Call of Duty game. If Uncharted’s use of the crumbling platform bit was wearing thin for you, then you may want to look away for some of Tomb Raider’s most exciting parts as Lara’s mere presence seems to send building tumbling off mountains in a cloud of dust and flames (see my video at the end of this review). And if you enjoy fun, you’ll have the biggest of grins on your face while they do.

When originally playing the PS3 version, I took my time and spent ages exploring every corner of the island for the collectibles, but this time -knowing that it’d be easier later with a full toolset- I went through without giving into diversions as much as possible. And boy, did I have fun.

I enjoyed my original slow playthrough, but playing again at full speed gave me an appreciation for the game’s excellent pacing. There’s no need to grind for XP at all, you can unlock most of the extra abilities and a healthy amount of weapon upgrades by sticking to the central path. I finished the game in three lengthy sessions and found myself struggling to put it down each time.

So, does the game look much better than the original console releases? Yes. Enough to buy again? Hmmm. Well, all of the images used for this review were captured with my PS4’s share button and I felt compelled to take many more snaps as there are so many frame-worthy moments to preserve.

The TressFX technology gifted to Lara’s (but not Sam’s) hair shows strands of hair rather than larger moving chunks and it dynamically reacts to the wind. More noticeable is how the weather or Lara’s collisions affect tree branches or bushes, which do help add some realism to the environments.

The best enhancement is the removal of the grey sheen that was ever-present last time. Now, everything is much clearer and the colours have a new vibrancy to them. Compared to the PS3 version you can really see the difference. Textures are also more detailed on everything from the forest floor to the walls of a WWII bunker.

Lara herself has been given a makeover and displays a better range of emotions and even her skin tone has been given a healthy redo. Movement animations are also improved, in particular the diagonal climbing, which no longer appears jerky.

So aside from the improved graphics, what else can you expect from the PS4 version? Well, Crystal Dynamics have been keen to explore the new DualShock 4 controller. Like Assassin’s Creed IV, the trackpad is used to bring up the map and you can use it to adjust the zoom (or use the analogue). During play, you can sweep your finger up the trackpad to light a torch (or hold circle). The light on the controller flashes orange and red when holding a torch to imitate the flickering of a flame. The DualShock 4’s speaker is used to play audio from diaries, radios or Lara’s bullets entering a weapons chamber. These sounds also play through your TV, giving an unnecessary echo at times; perhaps the vocal audio would have been better coming through just one of them. You can turn the controller’s speaker off though, which will save on battery life as it’s constantly squawking away.

So far so gimmicky? Well, I’m pleased to say one of the new features really add to the experience – voice commands. You don’t need the over-priced PS4 camera, that little mono headset bundled with the PS4 works just fine. Say the name of the weapon to have Lara quickly select it. You can also pause the game, bring up the map and perform other commands. Annoyingly there’s no list, instead, I learnt most of them from suggestions during loading screens.

The voice commands for changing weapons proved to be very handy for me during busier gunfights where my left thumb was busy getting into cover rather than swapping weapons on the d-pad. It also gets around choosing the wrong one if you can’t remember which weapon is assigned to each button. While I’ve not tested the Xbox One version, apparently it also features voice commands thanks to the Kinect.

Other ‘Definitive’ inclusions are extras like making of videos, a digital art book and a comic. And of course the multiplayer DLC. I never bother with the MP of the original, but I was pleasantly surprised to find it was quite fun on the PS4. Along with standard deathmatches, there’s a team mode called Rescue, which is like Capture the Flag, but with the difference of one team has to be killed with a melee finisher after being shot down and they can defend themselves with a pistol until killed or saved. It’s a neat twist on a familiar format that I may come back too.

The servers were a little quiet and prone to disconnects, but this was in the few days before the game’s official release. Less forgivable is the insistence of reaching a Prestige level (a few solid days of play) to bag an otherwise very doable Platinum Trophy. But Tomb Raider is, and always will be, all about the single-player. Just look at that view.

The Short Version: 11 months on and Tomb Raider has lost none of its initial magic. In fact, it’s just walked in and took the crown for the best action game on the PS4 or Xbox One. The new experience-enhancing controller features and voice-commands on the PS4 and the often startlingly-gorgeous visuals do indeed make this the Definitive Edition of one of the all-time greats.