With the Christmas release schedule being so packed, some games slips through the cracks. But here at Dealspwn it’s never too late to give you a verdict on a game. After all, in these modern times developers are able to add patches to their games to fix issues that may have been around at launch. The next-gen launch versions of Battlefield 4 on PS4 and Xbox One had a few teething issues, so maybe time (and a few patches) have proved to be a great healer. I’m about to find out as I dive into Battlefield 4 on the PS4.

Let’s get straight to it. Battlefield 4’s single player campaign is better than Battlefield 3’s, but still way behind the Bad Company games. For those of you kind enough not to have scrolled down to the multiplayer part of the review already, I’ll tell you why.

The story is your usual military shooter fluff. A group of US soldiers must prevent World War III, with the Chinese and Russians playing the villains. Your AI partners largely come across as dicks, but that wouldn’t be so bad if they could hit a barn door with their weapons. Enemies can be tagged with some fancy goggles, allowing you to track their position even when behind walls. Teammates can be ordered to focus fire on these targets and eventually they bag a few. But make no mistake; this is one-man-army territory. 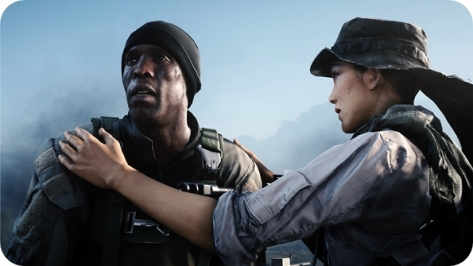 On the plus side, some of the more infuriating missions from the last campaign are gone, such as escorting wounded soldiers. There are less instant failures and cheap deaths too. Generally, it’s just not as goddamned annoying as the last game.

Oddly, there are less vehicle sections. There’s a bit of fun with tanks and armoured personnel carriers -and they are fun- but there are no stages with choppers or planes, making for some disastrous scenes when you try to work out how to use them online.

Points are rewarded throughout missions for kills, headshots and so on and you get to compare scores with folk on your friends list. I enjoyed this aspect, especially when I felt a stage was drawing to a close and I knew I’d need to make every (head)shot count if I was going to climb to the top.

Dice’s games have always been lookers, regardless of format, but with the PS3/360 versions last year being noticeably behind the PC, console gamers have been looking forwards to rubbing shoulders with their rig-sporting cousins with the arrival of the PS4 and Xbone. The first level of the campaign is a showcase for your new machine with some excellent detail and atmospheric lighting effects pouring in through shuttered windows. You’ll spend a few minutes just scoping in on all the fine detail and cooing at the particle effects in the air.

Later stages seem to ease off on the wow factor though, probably because they’re only slightly better than what we’re used to and the locations are as generic as they come with corridors, bases, aircraft carriers and such.

Stages are mainly linear affairs, but every now and then, the battlefields open up, giving you greater freedom on how to approach them. As you’re able to change your loadout frequently mid-mission, you’re encouraged to engage with different weapons. Most shootouts seem to take place over large distances, with enemies rarely running right at you. Oddly, enemies rarely react to hits when they’re running sideways from cover to cover. It’s insanely annoying when you know damn well you’ve hit them.

There’s a potential ticking timebomb out there for the SP side of the game in the form of a glitch that wipes your single player progress. I managed to finish the game and it was only when I went  back to replay a level to knock a friend off the top of the leaderboard that I discovered my file had been wiped at some point since while I was playing online. This has been an issue on all formats since launch and has only received a patch to reduce the chances of it happening. Not good enough, Dice, this should have been permanently fixed by now. Fingers crossed this multiplayer lark plays well then.

Couldn’t be bothered reading the single-player bit hey? Rude. To be honest, until Dice bring theBad Company lads back to the campaign, Battlefield’s main reason for purchase will always be the multiplayer. Back in November at launch, the game was beset with problems, but after a few patches and server fixes, I’m happy to say that today’s Battlefield 4 on PS4 is vastly improved. Ok, it’s fantastic.

Battlefield 4 is all about huge scenes and this is best shown in Conquest mode where up to 64 players can engage in open warfare across massive maps. With most maps in this mode supporting a full range of vehicles like gunboats, jets, choppers, tanks, jetskis, ATVs and more, you’re spoilt for choice and after a few hours, you’ll begin to see why people are playing this and not looking back atCall of Duty. I’ll admit, the controls for the jets and choppers are awful, and borderline unusable when compared to the ones in Bad Company 2, but there is a training ground to try them out. Or, you could decide life’s too short and just sit on one of the chopper’s minigun seats and get flown into battle with a huge grin and no regrets for the imminent demise of your accuracy rating.

Battlefield 4 is just so much fun. If you can forget about Kill/Death ratios and just run with it, you’ll not find a better online game on PS4. Conquest mode is also where you’ll see the game’s larger set pieces come into play, such as toppling a skyscraper in Shanghai or witnessing a sudden storm around a pacific island or a huge satellite dish collapsing. The Frostbite 3 engine is excellent throughout too as you use weapons to blast holes in walls or reduce cover to rubble.

Amongst the usual modes like team deathmatch, capture the flag, domination and such there’s an excellent addition in the form of Squads Deathmatch, where four teams race to 50 kills with fast respawns and bitesize maps keeping the action at a constant thrill-ride pace. The lack of COD-style killstreaks evens the playing field too.

Weapons and attachments take slightly too long to unlock, but at least guns can be used across different classes allowing for some -eventual- creativity with your loadouts. Also, it’s a little baffling that you can only edit loadouts from the spawn/deploy screen. Why can’t we do it in the menus? Tablet/smartphone users can download a free companion app to edit with loadouts at any time, but I’d prefer a menu-based option to be honest.

Overall though, Battlefield 4’s multiplayer is a fantastic experience that finally brings full-sized warzones to console gamers and without the bothersome issues that plagued the game at launch. Today’s game frankly embarrasses the ‘competition’ offered from the likes of Killzone: Shadow Fallor Call of Duty: Ghosts.

The Short Version: The single player campaign is an improvement over B3, but the continued presence of a save wiping bug shows poor work from Dice. But yes, multiplayer is why we’re all here for Battlefield 4 and it’s incredible. Be it in small Squad Deathmatches or huge landscape-shattering vehicle-enhanced open warfare in Conquest, there’s no better multiplayer experience on PS4.