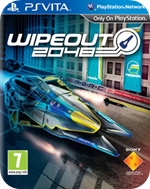 As the next generation of portable gaming steps forward, the WipEout series returns to its roots. 2048 is the first official season of WipEout’s familiar antigravity racing league, with a compelling intro video showing the Feisar team’s growth from traditional racing in the 1960s and through the generations and more advanced vehicles all the way up to the vicious arrowhead-shaped beasts we know and love.

Just because the game predates the others in the timeline doesn’t mean it’s particularly different. A few tracks start at street level, complete with road markings and tarmac, but it isn’t long before you’re racing up the sides of skyscrapers. The developers have featured wider sections of track in some areas to encourage combat, but in reality most of the tracks are still tight, especially when you’re coming into a corner at top speed amongst a pack of rivals. There’s a larger emphasis on skillcuts, difficult shortcuts that will give you an advantage as long as you don’t bounce wall to wall all the way through them. All the AI opponents seems to know about them and don’t blunder their way through like you will for you first dozen attempts. With no difficulty sliders available, there’s no getting around that this is one of the tougher WipEout games. 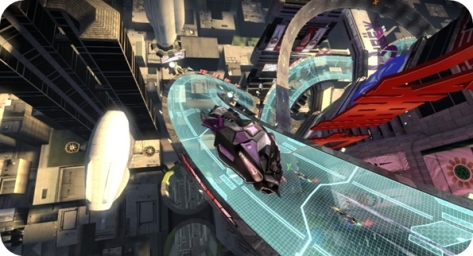 2048 might not be that far away, but in terms of what you’re looking at here, it might as well be thousands of years in the future. Scaling skyscrapers and looking through a transparent track suspended thousands of feet above a city keeps the setting fantastically distant. Couple this with the fantastic neon visuals offered in Zone events and you’ll realise the best chances of such sights happening in real-life would involve the architects of Dubai and Vegas and a whole lot of LSD. There are ten brand new tracks on offer, which may not sound like many, but the campaign shuffles them very effectively so apathy doesn’t settle in.

Single-player campaign events consist of races, three lap time-trials, sprints, zones and combat events. Event selection is handled with a grid and the Vita’s touchscreen. It’s clean and slick looking, but some events are tucked away to the side too much for their own good.

Zone events follow the visual scripts from the WipEout HD Fury pack and look even better with their solid neon colours pushing a super HD retro dream into your skull. These lush visuals are still sadly reserved for this solitary mode where your ship speeds up over time and you have to survive for as long as possible before you blow up from shunting into walls once too often. I just wish they’d include these visuals in regular races too as this mode is tinged with disappointment as you always lose eventually.

Combat events can be a lot of fun as it’s all about causing damage rather than racing. If you’re given decent weapons you’ll have a blast just hanging around the back of the pack where you have the most backsides to aim for.

To favour the various modes on offer, there’s a greater emphasis on vehicle choice. They have been split into multiple categories including speed, combat and agility. Combat vehicles potentially pick up stronger weapons, three rockets instead of one for example, and are still generally quite quick. The agility ships are annoyingly slow though, meaning competing against the others is a miserable affair.

The later prototype ships take a while to unlock, which is a good thing as track familiarity is key to succeeding with them. These new ships need their engine capacity boosted by constantly nailing the blue speed boost arrows. You begin weaker than your competitors, but towards the end of a lap you’ll be going way faster if you’ve hit enough arrows. You need to do it each lap too, keeping the pressure on throughout.

New ships are unlocked by completing side events and levelling up. The stat difference between some ships are negligible though and often not enough to give you the advantage in a tough event. Chances are you’re just going to have to get better.

The time setting acts as something of an unofficial excuse for a lack of any new innovations. There are no new weapons to be found and the modes are all strikingly familiar to regular fans. Weapon pickups are still acquired by flying over yellow (offensive) or green (defensive) stars. Homing rockets and the ever-awesome quake weapons rule the track, while the misleadingly named canon (weak-ass machine gun) and wayward plasma weapons are disappointing. Some races restrict what weapons are provided. When a combat event only gives you canons and mines you know you’re in for a snooze fest.

You’ll have a lot of time to contemplate any faults you find, as each event takes at least forty seconds to load from the selection menu. Even restarts take about twenty seconds. Considering the digital format of the game this feels odd. The races themselves are problem free, with only the faintest signs of the frame-rate dropping during the busier pile ups in combat events.

The optional motion controls don’t stand up well to the game’s stern challenge. For long, sweeping corners, tilting the Vita feels pretty good. But for anything else? No thanks. Sharp turns require responsiveness that just isn’t there and it becomes difficult to centre your vehicle on the track after a collision or messing up a turn. Shaking the Vita right, left, right to perform a barrel roll is just madness too. Tilting the whole screen during these frantic motions is just too disorientating.

It’s best to stick with the traditional controls, using the shoulder buttons for individual left/right airbrakes and X to accelerate. This works well and my initial fear that the right stick is rather close to the X button never became a problem in terms of holding the Vita. One problem I did discover was that you have to press the right stick downwards to look behind you, requiring an awkward slide while still holding X, or releasing it just in time to watch the competition fly past because you took your foot off the gas. It’s best to just assume that the other racers are up your ass all day long.

Artists like Orbital and Deadmau5 provide a familiar soundtrack of beats that may split fans. There’s nothing aggressive or fast enough to get your adrenaline pumping during a race. It’s all a bit too chilled. But seeing as you can play your own tunes that you upload to the Vita and still have all the game’s sound effects playing on top it’s not something that caused me much grief once I’d added my own playlists.

The overall sound design for effects is great though, especially if you play through some decent headphones. The drone of the ships is intoxicating and the boom unleashed every time you hit a speed arrow is tellingly addictive. Good thing too seeing as some events will demand a mastery of them to match the pace of the AI. There’s one track that has a series of five on every turn in a twisty tunnel and nailing them all is extremely difficult but amazingly rewarding. I could have done without one of the item pickups making a noise exactly like the message notification on my mobile phone though.

The multiplayer modes were not fully operational at the time of writing as the games EU servers are awaiting the official launch. We’ll be back for a full report once they’re online as we’re eager to test the cross-play functions that allow Vita players to race PS3 gamers on WipEout HD’s tracks. The Vita has its own online multiplayer campaign and ad-hoc events too.

The Short Version: WipEout 2048 replicates the console experience very well, but doesn’t show many signs of evolving. It’s one for regular players as it gets very tough half way through the campaign. The various online options could potentially create much more interest though.