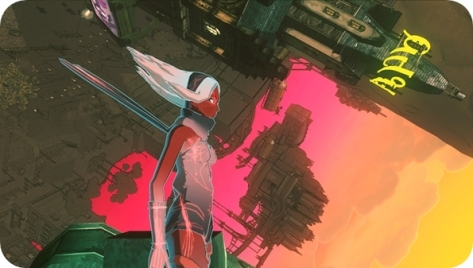 This is one the first action beat em’ up titles we’ve seen on the PS Vita and from this hands-on demo it’s fair to say that it’s one of the most visually appealing Vita games yet. Despite the demo being in English, there’s not much we can gleam about the story. There’s a mystical cat in a quaint town square, then monsters attack.

The aesthetic style is a hybrid of comic-book visuals and anime cell-shading. Storyboards illustrate some plot elements and you can move the Vita around to peak around the frames, providing a rather pleasing semi-3D effect. The gameplay seems to have been influenced by a wide range of sources as gamers will be able to spot elements of Bayonetta in the combat and the Spider-Man games in the way you utilise walls as traversable surfaces.

Pressing R displaces the world’s gravity and allows you to float upwards. People, enemies and objects that aren’t nailed down will also float. While you’re floating you move a cursor around and pick a surface to zoom towards and land on feet first. The world will then be orientated to make that surface into the new floor, be it on the side of a building or upside-down in an archway.

The Vita itself can be tilted to aim where you want to land too. Usually optional motion controls are a distant second best. Not this time though, I actually found myself favouring gentle twists of the handheld over the analogue stick. For larger camera movements the analogue stick is fine as you don’t want to turn the Vita too far away from yourself, but for minor adjustments, the motion controls are excellent.

It’s a neat system that quickly feels solid, and the camera is more than up to the job. Players of some of the Spider-Man games will remember how the camera would often lose it when you transition from floor to wall, that doesn’t seem to be happening here.

Not a lot of combat was on show for the demo, kicking seemed to be the primary mode of attack though as you give a good shoeing to glowing blob enemies. You can attack from close by, but for some serious damage you’ll want to take advantage of the floating mechanic, which is also the best way to reach flying enemies. The flying Gravity Kick uses a similar system to aiming for a place to land, but with a severe heels-first prejudice. Also, the greater distance you’re travelling to boot your opponent, the more damage you’ll inflict.

The boss fight involved using the Gravity Kick towards glowing parts on a creature that seemed to be part Octopus part Heartless (from Kingdom Hearts). Each tentacle was tipped with armour which it used as weapons by spinning around. The armour was breakable, but this was optional as after a few attacks on the glowing orbs on its head it would open up to allow you to attack its glowing centre. Once its health was depleted a tap of its heart with a touch screen tap finished it off, bringing the demo to a close.

The demo was too short to get any deep impressions, but I’d say the game certainly has promise. The visuals and platform transitions are the strongest features so far. There are a few potential weaknesses though. During the boss fight you can overshoot your mark and fly over the edge of a platform and it was a little unclear on how to dash back before you floated out too far beyond the point of no return. To be fair, this could be a problem with getting used to the controls rather than a genuine flaw in the game. It’s not like I had to restart the boss when this happened, I’d just be reset back on safe ground.

More of a concern is the depth of the combat itself, as I hope it will eventually involve more than one button attacks, especially if they’re all kicking. The enemy types were a bit uninspiring too. Early grunts seem to be black squid-like blobs with a glowing pink bit and the octopus boss was hardly a visual treat.

This is just one stage though, hopefully, as we see more over the coming weeks we’ll get to see the variety on offer. The decent motion controls and imagination shown in other parts of the game surely indicate we’ve got a lot to look forward too.