Strange one this. Zero gravity pinball with a grappling hook is the best way to think of it. It may look like another arcade shooter set in space, but there’s no shooting and you can’t freely control your movement.

After pushing off with one initial boost you then navigate by using your analogue stick to select a beacon to anchor your grappling hook on. Once you’re hooked up your ship will fly around the beacon until you release the tether. The momentum will carry you forwards until you bounce off a wall or until you grab another nearby beacon. 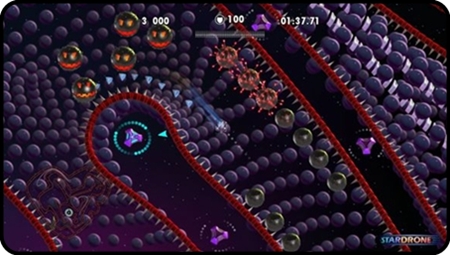 There’s so much travelling during the zero-gravity free fall, it initially feels like you don’t have much control over anything, a bit like Peggle. So unless you just want to float around like a broken Starbug you’ll need to learn how to use your ship’s momentum to perfectly exit your beacon spins. If you played the recent PixelJunk Shooter 2, it’s similar to the grappling points through the purple gas bubbles.

Releasing from a beacon is something that feels pretty easy to get to grips with after a bit of practice. It’s getting the initial grab that can be a pain though. Which direction you’re going to spin around the beacon can often be unpredictable, messing up your planned route as you float back the way you came, kissing that gold medal level rating goodbye.

The PlayStation Move controller can be used to play the game too. There’s not much going on though, you just aim a cursor at the nearest beacon. The feels slower than using a pad, but on the plus side, it can be more accurate, as using a pad’s analogue stick can sometimes be a bit vague when there are two beacons close to each other and you select the wrong one.

Levels are completed by reaching a set goal. This might be collecting all the stars or maybe defeating all the enemies. Finding all the stars can be tricky on the larger levels. But at least the map, tiny as it is, shows their locations. Later levels will include locked zones where you need to find a colour-coded key, or you’ll need to find all the fragmented pieces of an Equilbrix (a large star). Keep a careful eye out for the dangers of these space mazes. Insta-kill spiked walls, mines and creeper drones are all eager to destroy you.

If you enter comet rush mode by collecting lots of stars, you’ll be able to take out flying enemies by swinging into them. Kill a few in a row for a score multiplier bonus.

There are 53 levels to the game with bronze, silver or gold awards to be won if you can rack up some decent combos and make good time. The online leaderboards may bring out your competitive streak too if you actually have fun playing the game.

The Short Version: While it’s certainly different from anything else on PSN it’s questionable as to how much fun it actually is. The swinging mechanic is interesting, but not really strong enough to base a whole game around. One for the challenge hungry compulsives really.