Not long to go now before we touch down on Helghan again to get stuck into Sony’s PS3 exclusive first-person-shooter, Killzone 3. It’s the only series Guerrilla Games have been working on for years now, so we’re really expecting great things from them, especially considering how much they squeezed out of the PS3 last time. Here are three reasons it’s shaping up to be one of the finest shooters of 2011.

Things were wrapping up nicely towards the end of Killzone 2, until [SPOLIER] idiot ISA meat-head, Rico, martyred Scolar Visari, which would prove to enrage the Helghast and give them more reason to fight than ever. But before Helghan can truly unite as one to repel the earth forces of the ISA, a new leader must take the throne.

There are two new characters vying for the vacant seat. The CEO of Stahl Arms, Jorhan Stahl voiced by the always brilliantly evil sounding Malcolm McDowell and his his opponent, Admiral Orlock, voiced by Ray Winstone. Expect a plot that focuses on the Helghast more this time around, delving into their history and what’s left of their humanity. We’re not expecting a Flags of Our Fathers / Letters From Iwo Jima mutually sympathetic balance, but it’s looking more interesting than the plot from Killzone 2 already.

Gameplay has been tweaked subtly to improve on Killzone 2’s impressive combat. Aiming is less sluggish now and even the Helghast seem to have finally realised that headshots arelethal and they should just die already. New melee moves are considerably more violent with eye-stabbing and throat-slitting showing a gruesome level of detail. The cover-system was still a mess when I played the game a while back, but fingers crossed it’ll work better by release day. Or better yet, just scrap it and bring back secondary fire to the weapons again. That single shotgun round on the Helghast rifle in the original was just unbeatable. 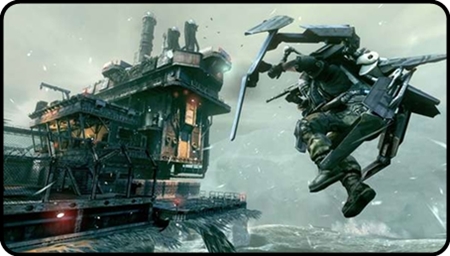 Everything’s better with jetpacks too. Ok, they’re more jump-packs here as you can only use them to hop around, but seeing as there’s a machine gun attached to it, we’re not complaining. The inclusion of a few on-rails shooting sections are a welcome addition to the team too and with any luck we might get a go in a tank again like at the start of Killzone 2.

Click here to read the rest of my article at Dealspwn.com