Guitar Hero and Rock Band have made the traditional button-controlled rhythm-action game obsolete thanks to their Fisher Price-style range of plastic instruments. However, those of you who’d like to see the return of games like PaRappa the Rapper and Frequency might want to take a look at Vibes.

Vibes is a PSP Mini released last year that passed most of us by with barely a whisper. However, I recently gave it a go and decided it was well worth a mention as it’s one of the finest Minis I’ve played in ages.

Notes represented by the four PlayStation symbols, fly towards the centre of the screen where you control a pointer in a circular zone, to aim at them and hit the corresponding face button as the icon gets to your circle. Hit it bang on halfway for perfect points and the circle flashes green. Too early but still touching your zone will net you less points, while hitting a note too late will result in a saddening red glow. If you really want to enjoy Vibes, then play it on your PS3. The analogue stick is much-better suited to the gameplay compared with the PSP’s stiff and inaccurate nub. If you ever have to look down at your pad when a game prompts you press a specific button, then you might want to avoid this for a while as it’ll eat you alive. 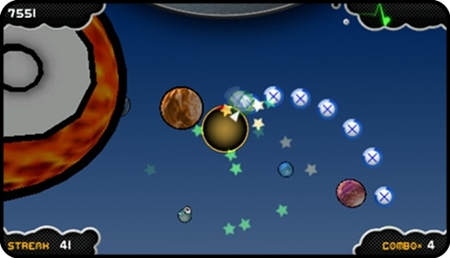 You’ll be attacked from all sides by the invading notes, that aren’t restricted to coming in from their sides of your control pad, X from below, O from the right and so on. They will some times though just to lure you into a false sense of security, before cheekily swapping the O and Square ones around. Get ready for different speeds and angles later on too, meaning you’ll need to make quick decisions about which ones are going to arrive first.

Most notes require a tap, but there are a few that require you to hold a button down and guide the analogue stick through a long bending line. And yes, just like Guitar Hero, it’s devastating when you miss one of them and have to look at it for ages before the next note arrives.

Close groups of notes are a test of discipline which when done correctly, really make you feel like you’re ‘playing’ the song. The analogue swings to fend off notes from opposite sides of your zone have a nice pace to them too. When every note type is storming towards you from all angles it starts to feel like a retro arcade shooter, which works in its favour as it ramps up the excitement even further.

Songs can be ‘failed’ if you mess up too much. There’s a health metre in the corner, but you’re not going to have time to check it if you don’t want to mess up even more. You’re only likely to fail the medium or hard versions of the tracks really though.

There are 13 tracks available, but many of them need to be unlocked by playing through the others first. It’s not clear if you have to build up points or just pass certain songs, but they seem to unlock at a fair rate.

The music is from bands most of us have never heard of, but the genre list is wide ranging including: pop, hip-hop, house, emo, classical, J-pop, psychobilly, rock, trip hop, latin, punk, electro and indie. Despite the talent being relatively unheard of, most tracks are well-suited to the gameplay. I even enjoyed a few from genres I’m not usually a fan of.

Getting onto the pre-set leaderboards for each song is ridiculously tough. Even scoring a 98% hit-rate isn’t always a guarantee of getting in. Keeping the pointer central during long notes and chaining perfect notes together is something that will take time to master. The game can still be enjoyed and songs unlocked, without seeing your name in lights so it’s not something you’ll be overly concerned with.

There are a few areas for improvement in this otherwise excellent game. The way the song name flashes up at the start of a track, often obscures the first few notes. The backgrounds aren’t particularly impressive, but you have to wonder if there’s any point making an effort here as players can’t afford to let their eyes wander.

What I’d really like to see next time is a move to a proper PS3 version either at retail or via PSN. If Laughing Jackal are able to get some music that’s more widely known than this slightly Myspace playlist (no offence, it’s still pretty good) then this might grow into quite a hit.

The Short Version: A little gem that needs to be played on the PS3 to be really enjoyed. Vibes is an incredibly good rhythm-action game combining button-matching and analogue stick flicks to really suck you into the music, in ways that the big guns with the plastic instruments often fail to do.