All good things come to those that wait. Not just an adage for the long wait that’s preceded this much delayed game, but a piece of advice for getting through a rough start with Polyphony Digital’s driving simulator.

There have been a few patches already to fix the online issues, such as packed servers infecting the single-player game. So now after the storms have settled following GT5’s release, we can provide a proper verdict of the game as it stands today.

Gran Turismo 5 is a great game when you hit the track and for those players who will enjoy tinkering with a cars settings to optimise performance. In many other areas though, GT5 is seriously average. Let’s have a look through the rough stuff and see if the good can overcome it though.

The menus are sluggish and poorly laid out, making navigating the career mode a real chore. Even the car showrooms are problematic as comparing a list of different cars stats is too slow as each tech sheet loads after the car, making it a slow process looking for the most powerful ones. There’s still no option to test drive a car from the showroom, instead you have to try and hunt it down in the long, uncategorised list in the Arcade mode.

Most annoying though is the lack of shortcuts. Many of the career tournaments are very specific as to what car you can use, so it would be good if you could go directly from the ‘allowed cars’ list straight to that section of the showroom if they’re available to buy. At least the loading times have sharpened up a bit since the v1.02 patch.

They’re just menus though right? Well a few of the races have crumbled beneath the weight of expectation too. The Rally events are really poor, the cars feel under-powered and handle like milk-floats in treacle. For some bizarre reason, the map is moved to the middle of the screen for these races, which is really distracting. It’s so badly placed, I thought it was a glitch at first. 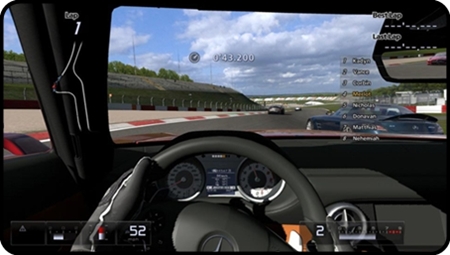 If you’ve been looking forward to taking on The Stig’s and other celebrity lap times on the famous Top Gear test track then brace yourself for disappointment. The track isn’t unlocked from the start and you’re forced into a Volkswagen Bus (think Little Miss Sunshine) race around the track. It couldn’t be duller. Once you do unlock the track, you can’t gauge a comparable lap time because you can only perform a rolling start, the TV show times a lap from standing. Polyphony Digital have completely missed the point of including the track. If they’re going to patch anything else, let it be this. That’s PATCH, not paid DLC.

We’ve finally got vehicle damage in Gran Turismo. But guess what? It’s awful. Not every car can be damaged and the most I’ve managed to do so far is get a dishevelled radiator grill and a melted wax look on a bonnet. They really shouldn’t have bothered.

But as I said earlier, GT5 really tries to get back to the top of the podium once it gets going on the track. A word of warning though, you really should use either the in-car view or the low-riding road camera as the game seems to handle completely differently from these perspectives. For every racing game I use the trailing camera viewpoint, but in this game that view was almost impossible to use as the cars feel like the steering is broken as they seemingly refuse to turn. Change camera though and the cars fire into life and you can really attack those corners. Sounds crazy, but give it a go.

These closer views also add a sense of speed that is otherwise missing from the cars. You’ll get a better view for over-taking during the crowded starts too. Using your mirrors is essential if you’re using an under-powered car, but have managed to wrestle your way to the front of the pack. The other cars will often be quicker on long straights, meaning you’ll have to block them off. I know, excitement and Gran Turismo, at last!

The on-screen racing line feature that Prologue introduced is back and is more helpful than ever for mastering the corners thanks to the braking hints it provides. Sometimes you might find a better line for yourself and you’ll certainly have to deviate from it for overtaking, but it makes the more daunting tracks a bit more approachable. Well, except for that downwards slope on Laguna Seca which most of us just sort of, well… fall off.

Slowly earning money to buy cars for each tournament can be a real grind, and to make matters worse you’re often given useless cars as prizes. What sort of mean game gives you a god-damn Prius as a prize? Many events must be repeated more than once as they reward you with cash and experience. Events are locked off until a certain level is gained and early on you’ll need a new car for each tournament.

Choosing the best available car is crucial when looking to enter an event. Not only that, but most races require you to spend money on boosting the power. Sometimes you’ll still be a little slow, just enough to never overtake that last guy, despite a few upgrades. One turbo purchase later and you’re winning the same race six seconds ahead of him. It’s often less about racing skill and more about upgrading to have a better car. For large parts of the game you have to buy the cars you need, rather than the cars you want.

If you want to keep sane during the first few hours I’d advise dipping into the Arcade mode every now and then and having a blast on one of the expensive cars you’re miles away from obtaining in the Career mode. It’s a great reminder that good things are most certainly on the way even if you do feel like a janitor at a car show room who borrows the keys for a joyride every now and then before mopping floors for three hours in between.

The overall car handling is on top of it’s game, I’m relieved to say. There are a range of optional driving aids you can tweak to see much work you need to put in to tame these super-charged beasts, but don’t expect to be power-sliding around every corner. We’ve all got used to arcade-style racers in recent years and Gran Turismo 5 offers a real alternative and improvement to the likes ofRace Driver: Grid, Forza 3 and NFS: Shift, who all did a good job during The King’s absence. Despite the aforementioned glaring faults in GT5, it’s a successful return to the top of the podium as far as the racing goes.

The graphics on the high-end cars are often stunning, even if the gap between GT and other racing games isn’t as big as it used to be. The reliance on the in-car camera means that you’ll have to use the replay and photo modes to get a proper look at your shiny new ride. They look better than ever and you’ll watch in pride thinking ‘was that really me’ When you see some of your moves. It’s a shame there’s no fast forward option though, especially if you want to see that crafty pass you made on the final bend of a five lap race.

The real-world tracks will be familiar to most racing game enthusiasts and there are a few new city based ones to try too with the Rome track being a highlight. The Nürburgring Nordschleife is still an absolute monster of a track that can be tackled in smaller chunks or all at once. Weather-wise, races are generally dry and brightly lit. Night, snow and rainy races are all greatly out weighed by pristine day-time events. I think we were all expecting at least rain as an option on most tracks.

Go-karts make their GT debut and they prove to be great fun with ultra-responsive handling. There’s a bit of an arcade vibe to them (comparatively), but you can spin them out if you accelerate out of corners too harshly. These might become multiplayer classics.

There’s a new mode called B-Spec which is where you manage racers by giving them instructions throughout a race, keeping a close eye on his stamina. Stamina? What’s he driving a Flintstones dasher? Also new to the series is the track creator which is more of a random generator to be honest. The new TV channel is packed full of car-show clips to download and will expand over time. There’s just too much to go through here, but look out for our follow-up feature that will have a deeper look at these additions.

Online races are thankfully much smoother than Prologue, but are prone to the odd twitch depending on your connection. If you’re setting up a race event you can choose the track, limit the driving aids, penalties and what sort of power range of vehicles can be selected. You can use your own cars or one from a generous list.

If you’re hopping into a race, you can’t see what power range it will feature from the lobby list and you can’t search specifically for a range either which can be annoying if you want to have a race with say, just muscle cars. While you do wait in a lobby though you can perform practice laps on the chosen circuit, which is a neat way to try out a few cars you don’t own.

An ongoing effort -that we’ll be keeping a close eye on- is being made to make a community for like-minded players where you can message each other and send each other cars as gifts. See, there’s something you can do with the Prius after all.

The Short Version: Admittedly, it does sound like there’s more wrong with GT5, than there is right. Many of the negative points are based around the menus and the lack of progression in the game’s format when we’ve seen the competition flourish in recent years. Once you get on the track though and brave the in-car viewpoint, the game fires into life and demands respect. The car models are fantastically realised visually and in their handling, and the variety of vehicles on offer is unmatchable. You’re going to need a lot of patience to get GT5’s stubborn motor going, but it’s worth the effort once you do.

One thought on “Gran Turismo 5 (Review)”