Enter your bid to become the next TV Superstar by making your way from a Z list nobody to the ultimate star. Hard work? Graft? Autobiographies? Sleeping with Katie Price? Pfft, just wave your arms around in time to the lines like a mirror-licking basement obsessive.

Mini-games are how you’re going to attain stardom via a variety of TV channels and commercials. You start by creating your character by getting the PS Eye to take a few mugshots of yourself before gasping in horror at the sex offender it seems to have replaced your face with. Got a full beard? It’s only going to pick up the moustache, not a great look.

You can add your autograph too, but it’s a bit of a mess trying to write anything that doesn’t look like child-scribble with the Move controller. More entertaining is the way you can record your own catchphrase which is played back to you whenever you step on the stage. It’s strange how amusing it is hearing yourself say bad words on the telly. 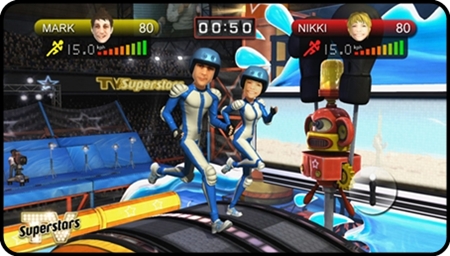 DIY Raw: This take on home-improvment programming is a mixed bag made up of a fair few mini-games. First of all you must remove the wall-paper and plaster with a sledgehammer (subtle), making sure not to smash any windows, hit any water pipes or wiring. The hammer swings are patchy and unpredictable, making this more hard work than it should be. You then go on to saw planks and spray-paint shapes through templates, both of these are done well. You must remember the final spray-paint image too as it’s then split into nine tiles for a puzzle which would be fine if the controls were a bit more responsive. A wall-painting game turns the controller into a roller which is well-represented on-screen as you try and maintain the simple two-colour pattern required. It’d be more fun if the time-limit wasn’t so short. The final game has a conveyor belt of items specific to the client’s tastes (new age, rock, old folks), that you can grab to cover up mistakes.

Big Beat Kitchen: This is a bit mental as you have to combine an epic list of ingredients to make meals like pancakes, fajitas, curry and spag bol. Onions must be chopped, eggs whisked, beef hammered, pans heated, garlic pressed, cheese grated and more besides. There’s usually a rap or two thrown into the process too where the cooking briefly stops as you have to point the controller to match the arrow prompts. It’s pretty exhausting and often annoying when controls go awol on you when trying to desperately add pepper to something by shaking your hand or the heating controls on your cooker seem to break.

FrockStar: Males of all ages will despise this, there’s a good chance the girls will too. Using camp swings of your arms you rack up points by strutting your stuff down the catwalk, but not before you strip your avatar and replace his/her clothes with the wrongness set by the host. Then you get the joy of adding your own make-up to try and match the picture you’re shown for all of two seconds. Naturally your face comes out of it looking like a drag-queen after a child drew on their face with biro and a paintbrush. I so made the right decision waiting until my house was empty before playing this episode. Shame I forgot about the Trophies on Facebook.

Let’s Get Physical: One of the better episodes to play as the activities are fun, compared to cooking and mincing down a catwalk. The first game has you running on a rotating wheel by pumping the controller in a running-arm fashion and occasionally pressing the Move button to jump over a spinning fist that tries to trip you. Keep going until you inevitably get taken out. Your running speed varies according to the game’s will, despite a consistent speed on your end. The jumping can be a bit slow too. The other game fires your wannabe through the air and gets you to rotate them into the corresponding shape on the target before they fly through it, with more points awarded for accuracy. Once you understand what movements and rotations perform which shapes, it’s really enjoyable.

Let’s Get Physical – Reloaded: Same annoying host, but at least you get to shoot him and the rest of the game’s creepy faced hosts in one of these blaster games. Both games here use a paintball machine gun turret. The first features a few rounds of nailing pop-up character heads with you needing to aim ahead of the moving ones. You aim to reach a set number of targets, but the round finishes instantly if you hit any friendlies (pics of you). The second game is a colouring-in scenario where you’re tasked with shooting certain areas of a picture with a specific colour. It’s messy, but you’re not expected to keep within the lines too much.

Commercials: These should have been the ideal place for quickfire games. Instead they’re overly-difficult, slow loading messes without restart options. You start off advertising toilet cleaner and hope to reach the dizzy heights of sports car ads. The shtick is the same for all ads, move the controller in-time with the prompt in fast, medium and slow movements. The timing is what breaks these games as all too often it says ‘too slow’ or ‘too fast’ at random. It’s a waste of time, made even more unforgivable by the lack of a restart option.

The deluge of loading screens and intermittent scenes such as the Hollywood boulevard-esque movie every time you finish a game will have you grinding your teeth in bored frustration. It might take the edge off if you’re playing with friends at least.

Multiplayer matches can be played competitively and can accommodate up to four players, usually on a turn-based basis. There are a few chances for co-op matches though, with the shooting games working the best. There are much better party games out there for the Move though.

The Short Version: More fun in multiplayer, but the unresponsive controls for some of the games can be a big problem. Could be a great present for the kids, especially if you don’t like them very much. If you don’t mind the little nippers, buy them Start the Party instead.