The aim of this point and click-style game is to safely land as many planes and helicopters as possible. You select an aircraft and draw a line for it to follow to the runway or helipad that matches its colour. The Move controller could do this sort of thing in its sleep as it proves easy to learn and will cause an immediate addiction to anyone you pass it to.It starts of very slow and relaxed, but as more and more aircraft start to fill the screen it gets brilliantly mental. If any of them touch and crash, it’s game over. It can all go wrong so quickly if you’re not paying attention. Your first reaction will often be along the lines of “no way” or “it screwed me,” but deep down you know you got cocky or lazy. There’s also a fast-forward button to speed up the first few planes that are widely spaced apart, it’s fun to see how long you can leave it on…‘oops too long.’ 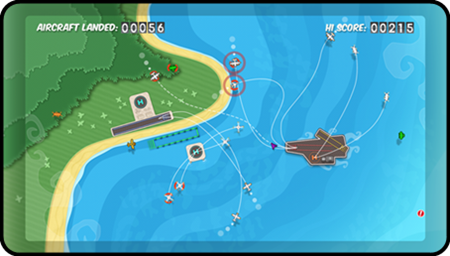 To keep you on your toes there are different sizes and shapes of plane and most of them have their own travelling speed. Helicopters are painfully slow and will probably cause most of your crashes on their way to the helipads. There are some priority planes that can’t be moved and you have to clear everything else out of the way.  You can re-adjust the flight path of any other aircraft at any time though, you don’t even have to point it towards a landing zone, just get it out of the way. You’ll get used to sending groups to the same runway with various curved flight paths so they all come in just behind each other. There are no extra points for efficiency or close calls, just a point for every landing.

Once you have selected a landing zone for a plane/chopper it will turn white, so you can focus on the others, that doesn’t mean it’s safe though as it can still crash into any other craft. When two of them get close an alarm will ring and the two potential crashers will be circled red. The problem with this is that the alarm goes off every time they get close, even if they’re not actually going to crash, which can be an annoying distraction from potential crashes happening elsewhere. But that is my only negative point about the whole game.

There are nine maps to play on, each different enough to warrant playing on all of them. Some have extra runways or even change the landing zone positions when the bad weather affects the wind direction. They take place over fields, deserts, beaches, oceans and a night-time city. The city map is even higher, so the planes appear to be much smaller.

Some levels are really tough, with four colours of plane and two colours of helicopters meaning the screen becomes a chaotic frenzy of white lines and red circles, but it’s brilliantly addictive as every crash will be met with a short vicious burst of swearing and frantic bashing of the retry button. Good luck getting the Trophy for scoring 200 points in one game, it’s going to be tough.

Maybe that’s where you should check out the multiplayer to give yourself some breathing room. Up to four players can play with anytime drop-in /drop-out multiplayer support. A great bit of common sense on Firemints part is how you are allowed to use a mix of motion controllers or standard PS3 pads to play the game. Your lines will be potentially smoother using an analogue stick and you can ‘snap-to’ targets, but you can draw the line quicker with the Move motion controller. Both are great fun, but I’d opt for the Move for the extra speed, plus it’s nice to be able to using it sitting down for a change.

The graphics are a simple affair, but are at least bright and sharp. There’s no need for extra detail in the graphics as the simplicity is key to helping you keep track of the swarming aircraft. If any of you have a stereoscopic TV and glasses the game also supports 3D. Nice if you’ve got it, anyone? The music often runs out after a short amount of time, but you can play your own music which is always a welcome inclusion to any flight.

The Short Version: Another win for the PlayStation Move. The simple point-and-click game is a perfect match for the controller and I’m loving the multiplayer support for Move and traditional pads together. Hell, I’d recommend buying this even if you don’t have PlayStation Move.