How annoying are flies? The dumb bastards come in from outside and spend the rest of your hangover bouncing off the window despite you closing the curtain and opening a window. Well next time you roll up a magazine, just beware, he might know Fly Fu.

This is a simple side-scrolling beat ‘em up. How simple? Well, all the backgrounds are basic grey pencil drawings on white paper and the cutscenes are basically doodles. But this only helps add to the game’s charm. The game has no pretensions as instead of saying ‘loading’ it will say ‘doodling.’

You are a fly on a mission to rescue your bride to be (Kate Moth) who is stolen on your wedding day by some bigger insects. It’s like a really simple plot from Dragon Age. No? Ok then. Each stage takes around ten minutes to complete by strutting from the left side of the level to the right and slapping every insect in sight. The insects vary for each level and every level has a boss too. The insects are in colour and are possibly animated photos. It’s all a bit cheap and cheesy like South Park. 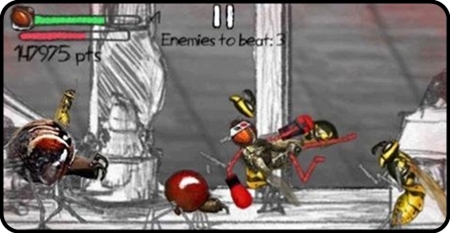 Fighting is really basic with X and O being used for melee strikes. Pressing them in conjunction with forward or double tap combinations will result in various amusing Fly Fu martial arts. The fly can also pick up weapons like matchsticks and pins. The most fun is when you activate ‘Berserk’ mode after using standard fight moves to fill the bar -it fills up nice and quick too- letting you unleash your true Fly Fu skills as you don some red boxing gloves and a kamikaze bandana and take out enemies with one satisfying hit that will smash them into pieces. If you nail a group with a flashy move (forwards and O is a good place to start) you’re treated to a cool slow motion finisher.

The Berserk bar doesn’t have to be full to activate it, obviously if you do activate if when it’s full, it’ll last longer. You can turn it off before it empties between enemies; this allows for a slither of strategy to the fighting that keeps the repetition at bay. The animation style is great, just watch his little fists go and tell me you don’t love it.

Each of the five levels has more enemies to dispatch than the last; with the final one having 200! The only time I started to get annoyed with the game was for the last boss. I still couldn’t help but be amused though. It was against a big spider with a machete in each hand.

The Short Version: A survivor mode adds to the replay value, but it’s not a game that you’re going to pick up again and again. While it does last though, the charmingly crude animations will raise a smile at the absurdity of it all for this fun beat ‘em up. At only £1.99 you really should give it a go.