It’s been years since the last F1 game and it’s a little surprising to see Codemasters test their newly acquired license on the Wii first, but probably a wise decision seeing as Dirt 2 and Forza 3 are keeping the non-Wii crowd busy for now. While Codemasters’ modern classics of Dirt 2 and Grid were developed in-house, Sumo Digital are in the driving seat for this one. Sumo do have a history of racing titles, but admittedly nothing that comes close to Codemasters’ recent output.

All the 2009 tracks are here along with the season’s original 20 starting drivers and their teams. Players can opt for single races, time trials, Championship, a three season career, split-screen (2 players only) race or career and challenges.

The whole race weekend experience is here if you want. Multiple practice and qualifying laps are all present along with a massive amount of tuning options. The only issue here is if you decide to go through all the qualifying there’s a good chance you’ll be sick of the sight of that track by the time you get to the actual race. Thankfully you can skip it all, at the cost of a low starting grid position.

The racing itself is supported by a decent range of handling options to make the game as easy or challenging as you want. Wheel spin control, braking aids and steering aids are amongst the options to tweak. The racing line option is a handy inclusion for helping you learn the best line for the track and also as an indication of when to slow down. It also helps show you where the track it going as the low angle of the camera can stop you seeing what’s ahead, even on the ‘behind’ camera angle. The line might even tempt you to try out the behind-the-wheel camera, which makes the racing feel even faster.

The racing rules can be altered to decide how much punishment you’ll incur for hitting other drivers and racing conditions such as tire wear, refuelling, random component failure, damage, weather and flagging are all optional too.

So how does the game handle? Well it does support a wide variety of setups, but unfortunately none of the buttons are customisable. The Wiimote on its own or slotted into a wheel (an F1 style wheel is included with some editions) uses similar controls to Mario Kart. It’s just too sensitive to be honest, with only long gentle corners providing any cool moments and most problems arising when you’re trying to straighten out after a quick manoeuvre and instead fish-tailing across the track trying to find your centre again. This makes the game much less accessible to casual players who may have enjoyed Mario Kart. It would have worked better with a sensitivity slider to calm it down a little.

You can opt for the Wiimote and nunchuk option, steering with the analogue stick and accelerating with the awkwardly placed underside B button (hint: flip the wiimote over and use your thumb on it). Gamecube pads aren’t an option (boo!), but you can use your Virtual Console controller if you don’t mind having to use the shoulder buttons to accelerate and break. For those hardcore Wii racer fans out there you’ll be happy to know the game supports the Logitech wheel too (really, you bought a proper wheel for the Wii?). 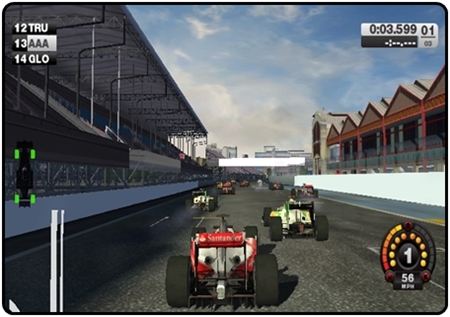 The short Challenges rise above any control issues though and make for some great pass-the-controller multiplayer or solo play. Along with your standard races, burning laps and elimination events there are checkpoint or gate races, overtaking and slipstream events. Cornering events help sharpen up your line skills while Touge lays down a racing dual where contact is forbidden. There are over 75 Challenges to try and earn an A grade for which will more than likely take up more of your time than the Championship modes, unless you’re doing full practice, qualifying and a 60+ lap race that is.

The best track on offer by far is the chaos of Monte Carlo with its walled-in narrow circuit, turning overtaking into an art form. The Singapore night race is included too but isn’t much of a looker really.

This Wii game’s graphics were never going to stand-up to its next-gen rivals, but the game is lacking overall polish in other areas too. There’s no race commentary, just the odd update from your pit team and the race day glitz and glamour is nowhere to be seen. And on the track, all the cars and drivers handle exactly the same. There’s some obvious scripting to the races too as early on you’ll watch the first group of six racers suddenly warp to light-speed in front of you, giving you something to do for the rest of the race at least.

Ultimately F1 2009 is an entertaining racer if you take the time adapt to the controls and wean yourself off the driving aids. It serves as a nice warm-up for the main event of the next Formula 1 game on the PS3 and 360 but maybe not something for the Wii’s usual casual-gamer market.