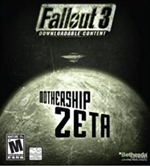 After being foolish enough to investigate yet another troubling radio signal he’s beamed up to an alien spaceship poised above the planet. He wakes up on a table surrounded by little green men with imminent laser probes getting too close to comfort.

Now one of two things will happen here. You pass out and wake up in an alien cell or the game will crash, but with the game still able to open the pause menu. It’s a different type of crash than we’re used to with Fallout DLC, but nevertheless another absolute piss take from Bethesda’s quality assurance department. If you get this problem you have to go through the ballache of turning off your machine and starting the game again and holding down L2+R2 as soon as you press circle before the ‘loading trophies’ screen, until you finish loading your save, clearing the cache memory.

Where were we again, oh yes…you’re not the only one to have been abducted and you learn through picking up audio logs that they’ve been nabbing people from around earth for hundreds of years often cryogenically freezing them afterwards. After escaping from your cell you team up with your fellow probed humans to find a way off the alien ship. Cue a lot of corridors (sigh) and even more little green men. They might be tiny but they take a lot of alien fire power to vaporise. You’ll get your kit back pretty soon, but there are plenty of alien health-packs available as well as an alien handgun, rifle and canon. The rifle-type laser is the best of the bunch and is more effective than your puny earth weapons. 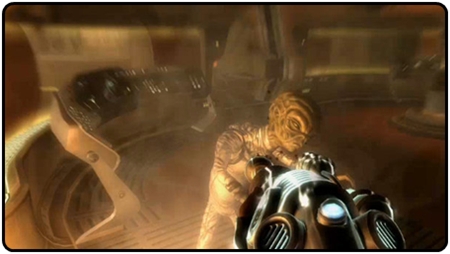 The aliens you take on are all the same save for the amount of armour they have on, sometimes they’re assisted by a sentry-bot. No problem on their own but the swarms of them you’ll encounter in the hanger will chop down your health bar in no time. You can ask one of the humans to join you, but is that a wise decision considering the narrow corridors and their constant desire to stand in front of you?

There aren’t many missions for this chapter, most of them revolve around blowing up a few generators that look and sound a little similar to the self-destruct nodes from the first Alien film, which might bring a smile to your inner sci-fi nerd. There’s even a possible Invasion of the Body Snatchers (‘78 version) reference later on too. The setting never truly grabs the 50s B-movie vibe that it could have though given the retro atmosphere of other parts of the game.

Saying that though, the audio logs that you’ll find on your travels are amusing, as you hear a wide range of people being forced to introduce themselves while the Mars Attacks-style alien voices get more irritated in the background.

The whole thing can be beaten in a few hours and is another very linear offering, with limited enemy variance and done-it-all-before missions, particularly compared to the excellently varied Point Lookout. If this is the last part of Fallout 3 you take on, the ending is a nice way to round things off though. 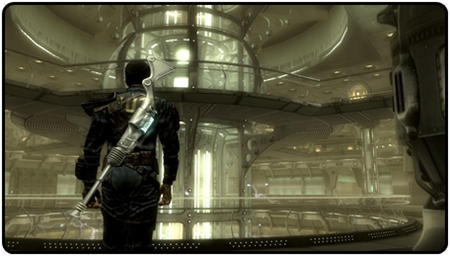 If you don’t own Fallout 3 yet, you really should pick up the complete DLC packaged Game of the Year Edition as there’s no other game out there that will provide you with such a long, rich adventure and it’s cheaper to buy than the combined DLC packs. The main game of Fallout 3 is a title where the attention to narrative and (their world’s) history is astoundingly deep and the feeling of exploring a massive environment is a constant pleasure, whether it be taking on super mutants, hunting down that final ingredient to build a new weapon or deciding to help or damn other characters and living with the consequences. The DLC is a mix of average to very good episodes with the main issue being the large amount of game crashes that really should have been eliminated before release as they outweigh the main game’s now comparatively rare technical issues.