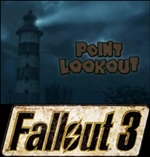 It’s about time you got to go on holiday in Fallout 3 after all you’ve been through. The new setting of Point Lookout feels like a lost Silent Hill waterside boardwalk, complete with deserted buildings and an eerie fog smothering everything. Sure, it’s no Hawaii, but choice is quite limited in a post-apocalyptic world.

The majority of this substantial map is made up of swamps populated with rednecks, mirelurks, tribesmen, ghouls, toxic bogs and enough radiated water to wade through to guarantee the vault dweller will never have (normal) children. 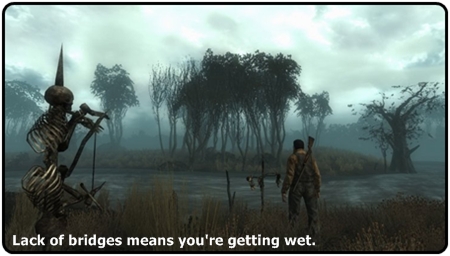 Deformed, mutated hillbillies -that may well have taken a wrong turn in evolution way before the bombs dropped- are the toughest new enemies you’ll face. The large ‘Trackers’ take a considerable lead-hosing before going down on their overly inbred faces. Raid their pockets afterwards and you’ll usually find vodka and an axe. Says it all really. The smaller partners to these monstrosities have a double-barrelled shotgun that’ll rip through the best of your Power Armour if you get too close. Even the ghouls that are scampering around are tougher than before.

New weapons include the aforementioned shotgun and a few rifles. These can be more effective than your previous go-to weapons such as the plasma rifle that would usually liquefy even heavily armoured soldiers. It’s good to see something of a challenge even if you’re edging close to Level 30.

Missions are found by either following your map markers from the start, or more excitingly, by just stumbling across them when you head into the fog to explore. There are a few main quests, such as helping a ghoul defend his home (I finally used mines!) and then investigating why a tribe keep attacking him. Then there’s the quests you find for yourself, such as the rich story you unravel of a Chinese spy’s progress from many years before by following clues from all around the map.

Or you can take it easy and help a woman gather ingredients to make moonshine or just plod along one of the beaches digging up precious things. You might as well fix that lighthouse too. You can even go back to the Capital Wasteland at any time to drop off souvenirs in your locker at home or do another quest before getting back on the boat.

The Pitt expansion offered a decent sized adventure, but it was still quite linear in its design, both as a map and in mission structure. Here you have a proper, expansive map to explore with plenty of tasks, back story and characters to discover at your leisure. There are barely any of those horrible underground bunker tunnels too.

As is the standard for many of us with Fallout’s DLC, you can expect plenty of game crashes and slow-down. But you should try and get through it if you’ve played the other episodes as this is easily the best one so far. The return to a fully open-world level design is a great return to form, meaning Point Lookout is a place you’ll be able to lose yourself in for hours at a time.