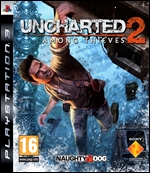 The team at Naughty Dog and Nathan Drake may just have saved the day for the PS3. The console has had plenty of great games, but many doubters still thought it was missing its ‘killer app’, a true system seller. No longer.

No other game tries so hard to entertain and excite you. Uncharted 2: Among Thieves is a constant barrage of ‘Wow!’ moments, one after another, just wiping out previous favourites with each spectacle. In just under ten hours the likes of Uncharted 1, Gears of War, Tomb Raider, Arkham Asylum, and God of War become just a footnote in gaming’s distant past.

The adventure has Nate and new girl Chloe trying to find the Cintamani stone and the lost civilisation of Shambhala before a psychotic Zoran Lazarevic gets his semi-fried face there first. It would seem that Google Earth just doesn’t cut it for these guys, as they tear across half the globe raiding ancient temples and caves for clues. You’ll be travelling to the oh so lush green jungles of Borneo, Nepal, and Tibetan villages and ice caves amongst other locations.

Gameplay, for those not familiar with the first game, is a mix of third person shooting and platforming/climbing. All these elements have been improved over the first game too. The climbing animations are silky smooth and make a mockery of Lara’s jerky spider-legs in Tomb Raider: Underworld. Shooting from cover feels more refined too as moving between cover spots is a lot smoother than before. Sometimes you’ll have the opportunity to shoot while hanging onto a ledge too. Weapons range from pistols, automatics, shotguns, grenades and rockets, all with unique properties. The brawling has been slightly changed to include countering opportunities; it’s still a little strange being forced to fight instead of shoot when you get in close though.

There is a bit of puzzling, but nothing taxing at all. They feel a bit lazy, with the usual move mirrors to reflect light beams, put heavy thing here, moving arms on a giant deity statue variety of tasks. While I’m being a bit negative I might as well get the rest of it out the way, I’ll be quick. Enemy variation is a little lacking as the majority of them are generic, padded-up merc-types. Where are the lovable modern-day pirates from the first game? The second level feels like a false start with a dodgy forced stealth section in a Turkish museum. Luckily it was only a case of a poor start to the greatest adventure you’re likely to ever play.

Apart from the second chapter stinker, stealth is an option rather than an order. It’ll make life easier if you take out a few guards unnoticed with stealth takedowns or you can try and take them all on at once with guns, at least it’s up to you for the rest of the game.

There are a handful of chapters for each location, all with a unique visual style that ensures the game feels constantly refreshing. Basically, Naughty Dog are just showing off.

The first chapter is from later on in the game’s story. Drake has been shot and is in a train carriage hanging off a cliff. You need to get a move on to make it out before it falls. After that you play a few levels explaining how you got up to that point. It’s one hell of a ride. 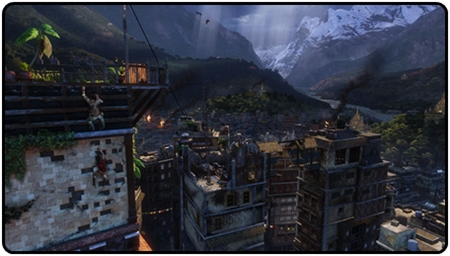 The desolate city in Nepal is rich with colour and the rooftop gunfights don’t disappoint. If you’ve seen that E3 video you’ll know what to expect. Climbing to the highest point in the city shows just one of the many outstanding views you’re going to see on this adventure. There’s plenty of epic jumps and last-gasp grabs to keep your adrenaline pumped too.

The train section has Drake clinging on to the side of train carts, hurtling through a tropical paradise. Just angle the camera round a bit and look at what you’re passing, you won’t be disappointed. The transition after the underground tunnel is startling too. We’ve all played our fair share of train levels but this is just insanely brilliant with the shooting, climbing and last second rolls to avoid signal lights all coming together beautifully. 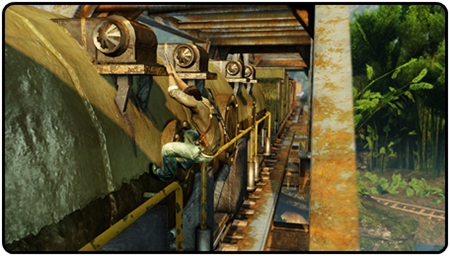 A truck chase in Tibet is a fine lesson in excitement, with Nate leaping from truck to truck before they explode. There’s no QTE telling you that you have to jump at a specific point, it’s all up to you. It’s a big middle finger to all the lazy games that replace gameplay with QTEs.

There’s no detail lost between the cinematic cut-scenes and gameplay either. It’s so seamless that once the action starts in a cinematic you’ll find yourself instinctively nudging the analogue stick along with Nate’s movements and before you fully realise it, control has been handed back to you again. It’s a brilliant technical achievement that loading screens never interrupt the action at all. You’ll only ever see them if you decide to skip a cut-scene.

Of course you’d be a fool to do such a thing as Nate (hats off to voice actor Nolan North again) and company are in top form with terrific facial motion captures and once again a script bursting with funny banter, wisecracks and even a storyline worth paying attention to. Some old friends make an appearance too which really adds to the atmosphere for returning fans.

One break in the action takes places in a high Tibetan village where you are free to wonder around just soaking up the atmosphere if you want to. And why wouldn’t you? The village is covered with brightly coloured prayer flags, the sun is shining and you’re surrounded by stunning vistas of the towering snowy mountains protecting the village and you can look down on the distant blue ribbon of river snaking through the forest below. You can almost feel the icy breeze nipping at your checks while the sun takes the bite off the mountain breeze. Wondering around here a joy, just watching Nate interact with the locals; this could be playing a bit of footy with two children, shaking hands with the elderly locals or even just saying moo to an ox. He’s happy to be there, and at that point grateful to be alive. It’s a great gap to the game’s action and gives you time to reflect on the adventure so far and wonder what else is in store down the road. Answer: even more.

Every time you step outside you’re greeted with a stunning landscape, one after another. Even up close the attention to detail is outrageously high. You’ll never want to set foot in another grey corridor or dockyard again. Even the dark and gloomy caves have some quality lighting effects going on. They just add to the effect once you emerge from the darkness you know you’re going to see something that’ll knock you’re socks off. It’s like being blindfolded before an awesome surprise is unveiled for you.

The music is suitably grand throughout with an epic orchestral score, with occasional far eastern flavours such as a regular shamisen theme for Drake. If you’ve seen House of Flying Daggers you’re on the right track.

There are plenty of Trophies on offer, mainly for racking up kills with specific weapons. They’re linked to medals in-game, but there are more medals than Trophies, so the replayability goes beyond the Trophy list. All these medals earn you currency which can be used to unlock skins, cheats and weapons to be used on a second playthrough (of that difficulty setting only). Picking up random pieces of treasure is back to and the buggers are deviously hidden this time. There’s even a complete multiplayer mode that has been through extensive private and public beta testing. We’ll have a separate review of that for you soon. 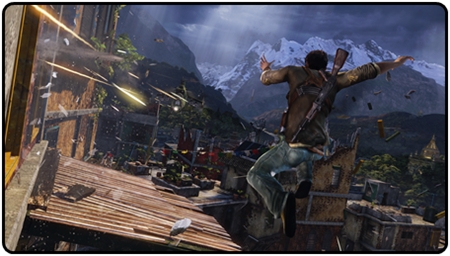 Surprisingly there’s no massive game data install as the whole game runs off the disc with no signs of loading times. Naughty Dog seem to have tamed the ‘apparently’ difficult to develop for PS3. It makes you wonder what on earth everyone else is playing at such is the vast difference in visual quality over other titles.

It’s not just the visuals, the peerless acting/script and gaming’s most likable hero that have made Uncharted 2 one of the finest adventures you’ll ever have. It’s just so goddamn exciting to play, refusing to sideline you while the cut-scenes step in and do the hard work, it’s you all the way. You’ll dread it having to end.

5 thoughts on “Uncharted 2: Among Thieves (Review)”