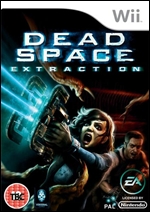 It was a bit of a surprise to all of us finding out that the next game to follow the excellent Dead Space would be on the Wii. It might be an ‘on-rails shooter’ but fans will enjoy this prequel to the original game, especially the first level which has a neat twist that they or anyone that’s seen the anime might appreciate.

The game starts before the Ishimura planet cracker mining ship was overrun by an alien plague causing severe psychosis and mutation in their human hosts. Haven’t played the first game? Don’t worry, the prequel nature of the game welcomes newcomers by letting them play through preceding events. Veterans will enjoy some familiar locations and characters and being a part of earlier events from a different perspective on how the shit hit the fan in the first place, as the first game had you starting well after the infection had already spread.

The biggest changes to the game are the transition to an on-rails FPS and the inclusion of constant companions. You are part of a group of four and despite one of them being a soldier, you are the only one that seems to know how to shoot anything. Sure you might see the odd bullet from the other guy but it never does any damage. And naturally, as is the rule in on-rails shooters, the enemy will always go for you instead. The on-rails aspect makes this feel like a seriously twisted ghost train ride. You do get to choose from multiple paths though sometimes.

The core aspect of the original is in though. Yep, it’s still all about dismembering the scabby bastards from the legs up. As blasting away at their chests and head is the slow way to do it. You’ll get into a system of taking the necromorph enemies legs out and then picking off their clawed arms to finish them. Messy business. 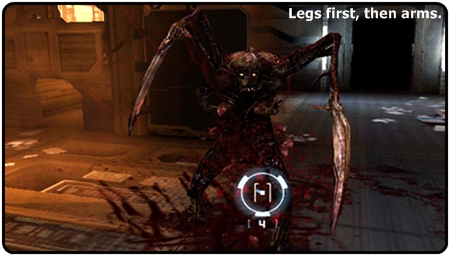 The first weapon is a rivet gun that has a powerful, charged secondary fire shot. This is your default weapon and is the only one that comes with infinite ammo. Twisting the Wiimote activates secondary fire functions, in the rivet gun’s case it can also be used to pin down panels to help barricade entrances against the zombie-like invaders.

Fan favourite, the plasma cutter (see box art) returns with horizontal and vertical shooting well suited to the Wiimote twisting. Unfortunately it’s missing the visual style of the original as you don’t see the guiding lasers trailing between you and your target. There are plenty of other familiar weapons too including the flamethrower, pulse rifle, ripper and the line gun.

Weapons start off quite weak and with terrifyingly small ammo clips but you can pick up upgrades along the way if you keep your eyes peeled. The small clips are offset by the chance to get a perfectly timed quick sweetspot reload which really ramps up the tension when facing off multiple targets. Yes it’s been robbed from Gear of War but more shooters should be doing this.

When you’re not blasting limbs off things in the dark you’re scavenging for ammo, upgrades and text/audio logs. When you do pick up an audio log you can listen to it on the Wiimote’s speaker which puts you in the game a bit more. Picking up items can be a nightmare though as the camera won’t wait around long for you grab them with your kinesis device. It would have been nice to at least have a stop/go button for these parts. 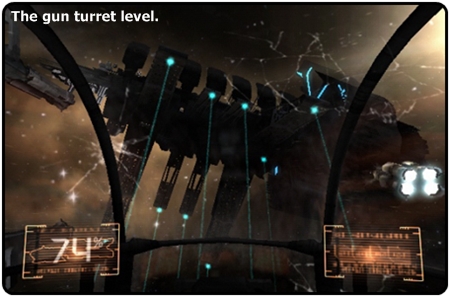 You can also use the Wiimote to re-solder circuits (for doors, elevators et al) by guiding a laser through an obstacle covered grid with a steady hand, often while shooting enemies at the same time while the rest of your team nag at you unhelpfully. Turret sections also make a return as you blast your way through an asteroid field when heading to the Ishimura.

The pace of the game can be very slow at times, often a little too slow between shootouts. However the pace is better suited to Dead Space’s style than say, the frantic, trigger-finger mangling of the House of the Dead games.

It’s nowhere near as scary as the original game, largely due to being part of a team and everybody constantly talking, leaving little time for your imagination to go nuts in the darkness. Inducing panic is the games strongest point when it sends multiple targets at you and your have to prioritise slowing them down first then going back to finish them off, all while trying to nail perfect reloads and selecting the appropriate weapons. 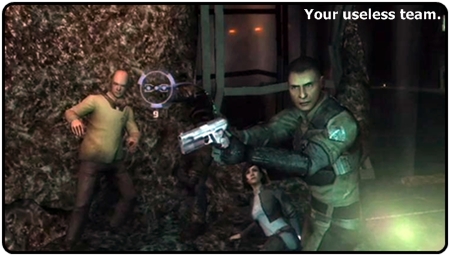 The controls feel well suited, never leaving you longing for your PS3/360 pad instead. There are set ups for playing with the Wiimote and Nunchuk and another for putting them into a Zapper. You can also force a friend / elderly relative to get involved with the slaughter as there’s a drop-in two player option. The game is a decent length for the genre, with unlockable challenge rooms taking you straight to the action for high score kicks.

Fans of the first game should feel comfortable about welcoming the game to the series despite the new gameplay genre and newcomers won’t feel left out, but they will want to pick up the original as soon as they finish up here. A full-on sequel to Dead Space has been announced recently too.