After the heyday of the duelling beat em’ up in the ‘90s it’s surprising how slow the genre has been to get going on current generation consoles. Virtua Fighter 5 and Street Fighter 4 eventually turned up and dazzled everyone for about a month while Soul Calibur added a bit of polish but left most fans shrugging in indifference as it offered nothing new. So what chance does The King of Fighters XII have? Looking at the lack of current competition (I’m pretty much ignoring the ever-delayed Tekken 6 until it decides if it wants a PS3 or PS4 release) it might be worth a look.

With Street Fighter 4 being the new benchmark for the genre it wasn’t going to be long before others were influenced by it. KOFXII has visually become stranded in no mans land between their old style and SF4’s. While not wanting to upset the hardcore fans love of the 90s 2D graphics they’ve also tried to update things a little. If I was being a little harsh, I’d say developers SNK looked at Street Fighter 4 and thought they’d have a go at 2.5D too before backing out about half way with terror in their eyes.

The fighters are still bristling with extra sprites but with some extra shadows to give the impression of depth to traditionally very 2D designs. It does grow on you a little, but it jars against the smoother backgrounds and then you remember how stupidly good looking SF4 is. 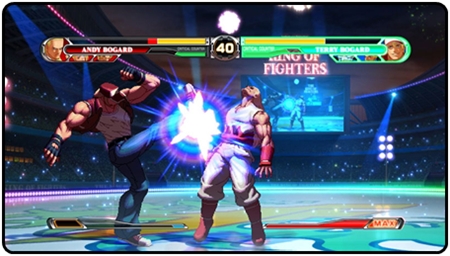 Having only briefly played past games in the series I dipped into the practice mode first and checked the pause menu for a moves list. Nothing. So throwing caution into the wind and excepting I could probably expect a pasting for a while I started up the Arcade mode.

Wouldn’t you know it? They’ve tucked it into the pause menu here instead. Oddly enough your opponents aren’t too keen on you awkwardly trying to set them on fire with flaming punches et al. Hopefully someone will see sense and add the list to the practice mode via a firmware update.

Arcade is made up of five matches of 3vs3 fights. So newcomers will have to learn how to control three different characters instead of one. It’s annoying, but it is a good way to force you into learning more than one guy’s moves (playing as Ken in Street Fighter for the last 15 years, might come back to haunt you now). You can’t tag in other fighters mid-fight or anything like that; they have to wait their turn. If you defeat a fighter you’ll get some energy back before taking on the next one.

Trophies are awarded for finishing the game in times ranging from 10 to three and a half minutes. Or quite hard to are you kidding me! Plus there’s a Trophy for finishing the game with each character, which means using the same fighter for the whole thing with no aid from the other two, leading to some severely pumped adrenaline in the final stage! 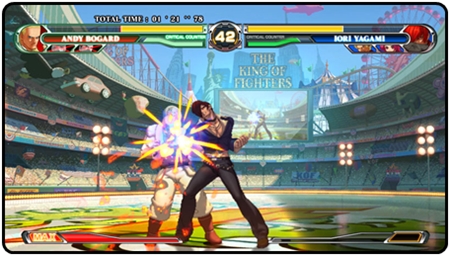 The game itself feels more like Street Fighter than Tekken or Virtua Fighter, so most of you will be able to pick it up. But you should try and explore the character range and unshackle the muscle-memory in your thumbs from trying to play everyone like Ryu, Ken or Bison and co. Not that you won’t find similar characters here.

There are combo and counter systems in place, some of which have been adapted for this title, but it doesn’t have the same depth of SF4 or even the roster sharing mashup of 2001’s Capcom Vs SNK 2.

While there are 22 characters on offer this is a smaller roster than series fans will be used to, but many of the favourites are still in, with a couple of newbies. For a full price game though the options are disappointingly slim with only Arcade, the empty practice mode and multiplayer. No survivor, challenges, unlockable characters or counting down time attack unless you count trying to beat other player’s times

Online matches are available and run at an impressively smooth rate. A clever lobby system has been implemented with a ‘winner stays on’ feature, with players waiting while one guy takes on all comers. SNK have really missed a trick here though by not letting you watch those fights. This would have added a terrific arcade atmosphere, mimicking a crowded arcade cabinet where you’d desperately try to spot cracks in the other players armour.

Offline multiplayer matches are present with 1vs1 or 3vs3 character matches and adequately provide a fun alternative to Street Fighter 4. Mainly because most of your mate’s will have no idea who anyone is and how to play as them as they roll their fingers around the D-pad until they pull off a special. Button bashers and ‘players’ alike can enjoy themselves.

If you’re a big fan of the genre and especially if you want to convince yourself that spending over £100 on that arcade stick wasn’t a mistake then you’re bound to get something out of The King of Fighters XII. Newcomers should possibly try before they buy or wait until it comes down in price a bit as the lack of options and old-school looks and gameplay might be a bit much. Still, it’s a nice warm up for Tekken 6 until someone deciphers a genuine release date for that on the Mayan calendar.