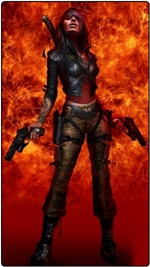 Ever wondered what would happen if John Woo and Tarentino made a movie together?

This third person acrobatic shooter is a plethora of 70s style exploitation and Grindhouse cinema cheese forced through the Max Payne bullet-time blender. You play as Rubi (voiced by Eliza Dushku), a sassy hired gun seemingly raised by Sarah Conner on John Woo movies and bourbon.

What we have here is a third person shooter with a nice slice of swordplay. It’s more Uncharted than Devil May Cry though. The old exploitation cinema influences are obvious but perhaps more to an older generation of gamer. Gamers of recent years will instantly make comparisons to games like Total Overdose or 2007’s Stranglehold. The latter being the shadow it will have to emerge from.

Wet was one the games that almost didn’t make it when the Activision and Vivendi merger went through. Along with Ghostbusters and Brutal Legend it managed to find a new home. Wet will now be released by Bethesda Softworks.

She’s Got The Moves

The first level of the new demo acts as a tutorial. Interrupting a dodgy gang deal that had already gone bad, Rubi seems to be after the object of the deal, a metal case, possibly an organ transplant container. Pop-up menus pause the action telling you how to dive jump and shoot, wallrun and slide on your knees. Naturally all of these actions are in slow motion and are thankfully easy to control. An early favourite is the ability to wallrun ‘up’ a person, backflip off their face (their face!) and shoot them before landing.

While the sliding is cool, it’s a shame it’s quite limited. With a restaurant full of waist-high tables it should have been a given that you could slide under them, maybe even shooting through it at anyone standing on it. Attempting this results in Rubi hitting an invisible barrier and floating around the edge of it instead.

Rubi can also aim at two different targets while diving through the air, which works nicely and earns you a decent bonus. If you manage to kill one before landing you can even start on another target.

While you begin in a Chinese restaurant, after clearing a few waves of henchmen you go on to pursue a gang member across city rooftops with jumping and vertical and horizontal wallrunning. Along the way you’re introduced to the game’s swordplay. The moves are basic, with currently only a slash attack or a sliding rise attack. It feels a little weightless to be honest as everyone goes down in one slash without putting up a fight at all, as opposed to the mass amount of bullets it takes to put them on their ass.

The rest of the level introduces a poleflip move, where you can shoot between grabs or even one handed while swinging around. There’s also a neat move where you slide down a ladder upside down while dual firing.

Looking cool and earning style points is the way you score in the game by chaining kills and performing a variety of moves. It’s tough though as there don’t seem to be many other moves on offer and  there are only seven more locked ones on the moves list menu (could be more in the final game). This, combined with the frightening speed your combo meter starts to fade between kills could be an issue.

Some replayability might be gained by the inclusion of the collectable cymbal banging monkey toys. Didn’t think I was going to be writing that today.

The end of this section asks that you break three motors located above shutter doors to block the flow of hired goons so you can move on. Usually you can replenish your health by grabbing a whiskey from specific points, but here you health regenerates at a rate depending on how good your current combo is, adding a sense of urgency to the violence. Tough luck if you’re just getting to grips with the game. There are a few multiplier icons to collect here to improve your chances though.

It takes less than five minutes to get to this point and already I was finding the combat a bit repetitive especially the weak-ass default revolvers that Rubi’s stuck with, not to mention the awful tiny targeting reticule that flits around even with the auto-aim turned on. Not a good sign at all. Let’s just keep our fingers crossed for some more moves unlocked later on, preferably for the sword.

The Grindhouse-stlye visuals are prominent in these early stages. The cut-scenes feature scratches down the screen and the gameplay features effects like dirt on the film and grainy effects that feel like a smoke-screen for the somewhat average graphics underneath. The images for this article are some of the few I could find that hadn’t been touched up to hell like they regretted the grindhouse effect. The way the brightness constantly flickers too can be uneasy on the eyes if you don’t keep moving.

Get you Rage On 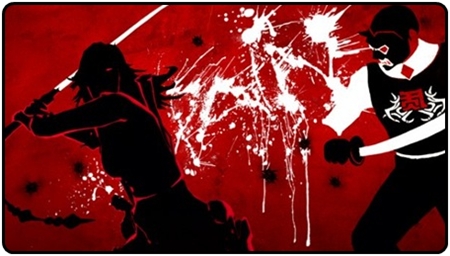 The next section of the demo (probably from a different part of the game) is a lot of fun, and a welcome break. After getting blood splattered all over her face Rubi goes into a Rage mode, the alarm-like noise will instantly remind you of Uma Thurman about to go mental in the Kill Bill films.

The visuals are what really stand out here. The world goes cell-shaded into three basic colours like comic book style silhouettes. People are black shadows, blood is white and everything else is red. Style points are thrown out the window and you’re encouraged to see how many quick, consecutive kills you can notch up with the sword and guns. It’s possible to get everyone in one chain here if you keep moving smoothly. Thankfully you aren’t stuck with the revolvers; instead you get an awesome sawn-off shotgun or dual-uzi’s. At one part you can slide around a corner on your knees and gun down at least eight opponents before the slide ends. The level is definitely the highlight of the demo by a long shot.

This is a generous demo as there’s one more scene. I’m guessing it’s from quite later on in the game as Rubi’s health bar is considerably bigger than the last two stages. We begin with Rubi casually holding onto the side of a fish van, one handed, as it heads down the freeway.

Remember the freeway chase in The Matrix Reloaded? Wet’s developers most certainly do. Rather than forcing you into a clumsily, hastily cobbled together car chase driving scene with shit vehicle controls they’ve decided Rubi’s the sort of gal that’s happier jumping across speeding cars to catch up in this on-rails section.

There’s no denying it all looks cool but it falls victim to the old quick time event (QTE) button matching cop-out. This tells you when to jump and dodge exploding vehicles. You can’t help feel like you’re being left out of all the cool bits while the virtual stuntman steps in. Maybe the developers should have robbed the ‘anytime’ jumping from the Pursuit Force games.

You do get to control the shooting while jumping or clinging to the top of a civilian’s car roof. It’s that goddamn revolver again though. Trying to nail goons leaning out of windows in the distance is a nightmare with the tiny aiming reticule. To be honest it even feels a little scripted, like you can shoot them as much as you want, but they won’t die until a certain checkpoint has been reached or you reach another QTE where you’ll leap across and slice off their arms (another reason to not lean out of car windows ever). It would have been nice to at least have the ability to shoot out their tires. 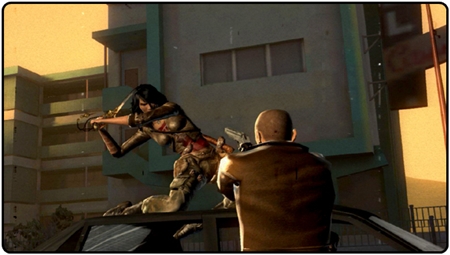 The demo ends with a cool stunt with Rubi wallrunning alongside a tipping lorry and leaping off again at the last moment. But again it’s a QTE. Why can’t we be trusted to do this when we can do these individual actions in the rest of the game?

Apart from the main story the other (locked for the demo) features are down as ‘Challenge Mode’ (probably some sort of timed or arena challenges) and ‘Extra Content’ (could be DLC).

Cautiously Optimistic
Overall in regards to interacting with the environment, with acrobatic gunplay and shooting the crap out of everything it looks like Stranglehold might remain as the best in class at the school of Max Payne. Hopefully you’ll be given the chance to ditch the revolvers early on and the extra moves not available in this demo will help to keep the combat feeling fresh. If the Rage mode stages are placed well enough apart, it might help to reignite the action before it gets tedious. It might be too late for some of the sloppy aiming though as the demo seems to be from quite a late stage in development.

One thought on “Wet (Preview)”