What is it that makes the world of Batman so cool? Costume? Detective skills? Unmatchable martial arts? His gadgets? The ability to strike terror into the hearts of criminals? The setting? The sheer madness of his foes?

It’s all of this and developers Rocksteady Games know it, and have shown the best understanding of the Dark Knight yet.

Story
The story begins with Batman delivering a gibbering Joker to Arkham Asylum. Only problem is that it seems he gave himself up way too easily. Like Michael Schofield in Prison Break, the Joker has a hidden agenda in getting locked up (ok, what he wants to do inside is slightly different). He manages to escape the useless Arkham guards before they’ve even put him in his cell, with a little help from the ever-doting Harley Quinn (brilliantly acted). So it’s up to you to chase after the Clown Prince while he leaves a trail of released psychopaths and familiar villains.

The Cast
The Joker looks better than ever with his design based more on the twisted creations of the comics, complete with his spindly frame and maniacal permanently grinning face. He’s dressed like the green haired, purple suit loving fruit-cake that we all originally fell in love with before the recent movie’s version. Batman’s suit is more grey than black, except for his cape and mask. His demeanour is constantly calm, hiding the demons inside. The detail on their faces is stunning, and their movement doesn’t seem to have a single frame out of place meaning there’s no jerky animated movements at all.

The voice work for the game is incredible. Kevin Conroy, the long standing voice of various animated incarnations of Batman adds some real weight and professionalism to the performance and really puts Christian Bale and his ridiculous growling and roaring in his place. As calm and collected as Batman is, the Joker provides the perfect opposite. Mark Hamil (also a Joker voice-over veteran) absolutely steals the show and has all the best lines as he constantly makes announcements over the island’s PA system berating his henchman and teasing you.

Bane and Croc are two familiar villains who crop up early on, there are more to look forward to but I won’t spoil it. It’s fair to say Rocksteady use enough to please the fans while keeping some other decent ones on the bench in case of a sequel.

Location
The whole game takes place at night (take note Nolan) on Arkham Island. Initial fears that it’s going to be a very grey, corridor based game prove to be unfounded once you get outside and look at the lovingly created creepy, crumbling island. There’s a healthy mix of labs, wards, old manors, caves, outdoor grounds and even a botanical garden. There’s a greenish fog across the grounds and later on a rich red that by then is a welcome and appropriate change to the atmosphere. There’s not a loading screen in sight either.

The nightmare levels are completely different to the rest of the game, but still of a high quality, the gameplay goes semi-2D and the villain use is spot-on. The scene of a tall corridor transforming into a dark rainy alley from the past is a brilliantly handled scene that’ll be familiar to fans.

Gameplay
Gameplay is a mix of group brawls, stealth sections against armed guards, picking up forensic trails (alcohol vapours, tobacco or fingerprints), climbing and grappling to get into locations. 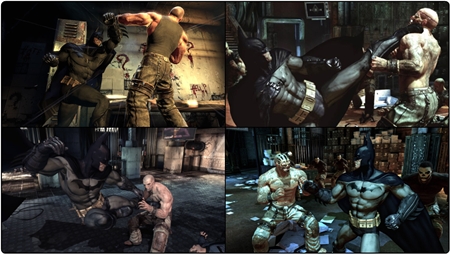 The fighting is one the game’s strongest features, going for a simple one button each setup for: attack, counter, stun, and dodge. You just point the left stick in the direction you want to dish out the pain. Countering is a bone crunching joy and easy to activate by looking out for the blue flash above a goon’s head. It all looks terrific too as the animations don’t clash into each other when interrupting for a counter, it’s as fluid as well…real. It works so much better than the button mashing found in the Hulk and Fantastic 4 games. And what’s better: It. Never. Gets. Old.

Fighting gets you XP which can be used to buy throws, extra health or more efficient gadgets.

The stealth sections are usually played out due to armed guards that can cut you down in no time. This is where the Detective Mode visor comes into play most. Here the world gets a blue sheen and you see blue (unarmed) and red (armed) skeletons through multiple walls and barriers, so you can plan your best route. You can also traverse around many rooms by using your grappling hook to zip around the gargoyles or reach other high spots, it’s awesome. 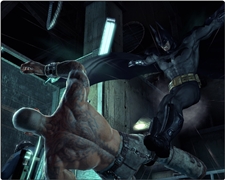 Now this being Batman, he never kills, so he won’t be picking up any machine guns any time soon, instead you have to knock these guards unconscious by either smashing their faces in, dropping in through a glass ceiling, setting explosive traps, silently gliding down and booting them in the face or tying them up to a gargoyle like a terrified pendulum.

The Riddler has filled the island with things for you to do. Such as solving a riddle in each area by taking a picture of what you might think the answer is, finding his trophies, picking up patient interview tapes (a series of increasingly sinister psych evaluations of Gotham’s crims), character bios and pieces of history about the island. The audio files are always discovered in sequence no matter which one you pick up, so they all have their own little self contained and coherent story. All this gets you XP too.

The Riddler’s challenges really show the care and attention given to this game by Rocksteady and will almost constantly distract you from the task at hand as you spot a trophy in the distance, just begging to be rescued. Often you’ll refuse to leave an area before solving its riddle. There are 240 of these challenges to complete.

The exploring side of the game uses the grappling hook and the Detective Mode to spot weakened walls where you can spray remotely detonated exploding gel (you can take your heat-vision and shove it Superman), you can even use this to get the baddies, it sparks em’ out for a bit rather than taking their legs off. You pick your gadgets with the d-pad and can look forward to eight in total. Chances are if you’re stuck on how to get somewhere for a Riddler prize, you can’t until you have a new toy.

Overall
There’re no weak elements here, just as you tire of air vents, you’re given new toys to explore with. The combat makes you feel like you are the Batman. You won’t spend the whole game fighting, as a perfect balance of exploration, scrapping and climbing has been struck, resulting in a constantly compelling and rewarding title.

It took me over 15 hours to finish the game after constantly stopping to try and collect everything for each area. I was still missing about 25% by the end. Luckily the game let’s you go back and mop up the rest afterwards.

Unlockable matches for Challenge mode feature multiple rounds of brawling or stealth takedown rooms. All of which are scored for an online leaderboard. Plus the Joker will be getting a release as free DLC soon as a PS3 exclusive playable character.

The massive effort to provide a decent length main game, rich with history and extras, high production values such as the visuals and voice talent and an intriguing plot have put all other comic book and film adaptations, and most other games too for that matter to shame.

Previous games for Gotham’s finest and the tie-in genre really were a case of the night being darkest before the dawn. Hopefully others will follow this example as a new day for the genre.