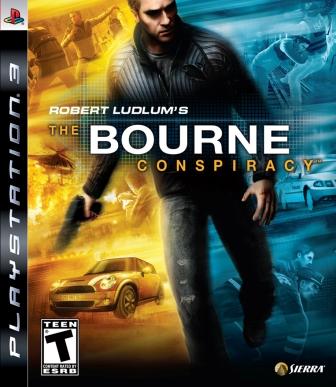 There’s no doubt whatsoever that the Bourne films are absolutely stunning. The reinvention (Bourneification) of James Bond through Casino Royale would not have been were it not for Bourne bringing the spy / action genre back with such unflinching force. So it’s a little disappointing that this game is not based on the films, instead it’s apparently more based on the original books by Robert Ludlum.

This was probably due to Matt Damon apparently not wanting to get involved with the project because he didn’t like the violent content. Wait…what? Mr Damon, you shoved a biro up someone’s hand and have spent three films smashing the fuck out of people. We’ll assume the cheque didn’t have enough zeros on it then.

Don’t be fooled by the new subtitle of ‘Conspiracy’, this is not a compilation of all three titles; this only covers The Bourne Identity. Having read the book though it’s obvious the developers have ignored it and ripped off the film instead, tweaking the odd familiar action set-piece a little (for the worse). There are also ‘memory’ missions from before Bourne went for his midnight swim off the coast of Marseilles. I’m guessing they’re written in invisible ink and between the lines in the book. They have done well to get the same awesome music from the films, which really pumps up the action. END_OF_DOCUMENT_TOKEN_TO_BE_REPLACED

Compared to Casino Royale, the Quantum of Solace film was a big let down, so there’s not much hope for the game of the film right? Movie tie-ins are usually average at best.

So it’s a big surprise to find out that the game is actually rather good. Actually it’s very good. The missions take scenes from the last two bond films, not just Quantum. But not in order, as the game plays through Quantum to after the desert sinkhole shootout, then through Casino Royale, then finishing with the remainder of the second film. Yep me neither. END_OF_DOCUMENT_TOKEN_TO_BE_REPLACED