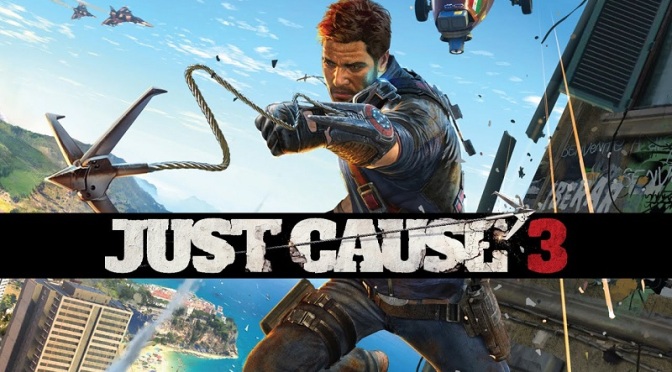 We’ve had more than our fair share of open world sandboxes on the new-gen consoles, but the wait for Just Cause 3 has been a rather long one. After all, nobody quite does explosions like Rico Rodriguez.

Just Cause 3 does so many fun things right, but the number of basic elements that it utterly fails at is truly shocking. My first few hours with the game were not good at all actually. However, as I got used to the rough edges, the fun side of the game eventually prevailed and I found myself reluctantly being teased into having a good time.

The story is mere window dressing to the carnage. Rico is once again tasked with liberating a sun-kissed set of islands from a tyrannical dictator. Rico isn’t so much of a character as much as a walking accent. But at least he’s not an asshole (hello, Mad Max).

What’s the best way to liberate a nation? By blowing up anything with red paint on it apparently. Small towns or settlements are packed with destructible items like propaganda speakers, dictator statues, billboards, fuel depots, generators and the like. Destroy them all and that’s another location ticked off the map. With over 100 areas to liberate, you’re not going home any time soon. You’ll also need to reach various liberation milestones to unlock story missions, so you may as well get stuck into any town you glide past.

Ah yes, gliding. While cars are available, they’re horrible to drive and actually much slower than taking to the skies. Rico’s grappling hook once again works in conjunction with his parachute to glide around the island. He also has a wingsuit for faster air travel. If you time it right, you can glide perilously close to the ground and use the grappling hook to propel yourself forwards.

The Arkham Knight comparisons are impossible to ignore and Rico’s abilities are a distant second best. The controls are clunky, momentum is hard to maintain and travelling longer distances can feel like a chore. Fast Travel flares are a rationed item for some ungodly reason too.

After Just Cause 2, Rico’s ability to tether objects together with his grappling hook made the game a huge hit on YouTube as gamers got wickedly creative with tethers and explosives. They’re in for a treat as Rico can attach even more objects to buildings, explosives, cars, helicopters and so on.

While many of the bases and towns you seek to liberate feel and look the same, you really do have a lot of options at your disposal. This encourages you to try different approaches in order to keep the gameplay feeling fresh.

You have an infinite supply of C4 and remote detonators (let down by shoddy placement controls a bit) meaning you can set off multiple explosions at once to give you a head start before the guards come running. Or use those tethers to pull everything apart. Shooting everything with guns, rockets and grenades on foot or while floating above with your parachute is another option. Or drop a bus on the party with a chopper. Being able to grapple up to any chopper that appears and steal it for your own wicked devices is super empowering too.

There is a slight danger that you’ll want to blow up targets with minimal fuss (there’s so much to destroy after all), so I found myself recycling the same old tactic of using the rocket launcher first, then stealing the inevitable backup chopper and using the missiles to finish the job.

I would have played on foot more, but to be honest, the gun controls are the worst I’ve played in any shooter since the PS2 days. The aiming is horrendous, there’s no auto-lock option to compensate, enemies absorb way too many hits and the manual zoom (after you unlock it!) makes Rico move at a snail’s pace. Until you fully liberate a town, enemies will constantly respawn behind you, making it difficult to stay alive on foot, not to mention incredibly annoying. It’s no wonder I’d cop-out and look for the nearest chopper or tank.

To make matters worse, Just Cause 3 has some of the worst loading times seen on current gen consoles. Some last more than two minutes. There are so many of them to. Despite the game using in-engine cutscenes, there are loading screens for the briefest of updates mid-mission. The side Challenges are an essential part of the game as they’re the only way to upgrade Rico’s abilities, but as they’re bookended by loading screens, I found myself avoiding them as much as possible. This is a nightmare scenario for a game like this.

The technical shame doesn’t end there. For a game that celebrates utter carnage unlike any other game out there, it really isn’t built to handle it. The frame-rate nosedives in built-up areas and if you kick off an explosion or two, it gets even worse. This is all the more frustrating when you need to react quickly to enemy fire or grapple away from a bad situation.

Issues like these aren’t easily fixed either, but I hope some patches can at least shave some time off the maddening load times. Sadly, it would seem that Just Cause 3, despite years of development, has been rushed out the door in time for a Christmas release. A few extra months may have done it the world of good. It’s far from a write off though and still worth a look for action fans that just want to watch the world burn.

The Short Version: Long load times, sluggish frame-rate and awful shooting would usually be the end of an action game. Just Cause 3 just about gets away with it though thanks to the hugely open approach to carnage with the likes of grappling hooks, parachutes, wingsuits, rocket launchers, infinite C4, tanks, choppers and the freedom to do whatever you want with them.

Fancy playing the game on PC? Here’s a link to the cheapest price on the market at the time of writing for US/UK/EU players.

One thought on “Just Cause 3 Review – Appetite for Destruction”